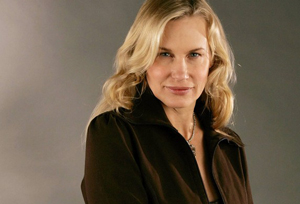 Daryl Christine Hannah (born December 3, 1960) is an American film actress. After making her screen debut in 1978, Hannah starred in a number of Hollywood films throughout the 1980s.

She has recently had several notable roles, including that of Elle Driver in Kill Bill, after a hiatus from major roles during the 1990s.

Early life
Hannah was born in Chicago, Illinois, to Donald and Susan Hannah. Her parents divorced shortly after her birth and her mother remarried Jerrold Wexler, a businessman and brother of Haskell Wexler, a noted cinematographer. Hannah, a vegetarian since age eleven, grew up with siblings Don and Page Hannah, as well as half sister Tanya Wexler.

She attended school at Francis Parker and the Chicago Latin School in Chicago until 6th grade when she moved to Parker.

Hannah became interested in movies at a young age, due to insomnia. She was very shy and was diagnosed as 'borderline autistic'. Hannah attended the private Francis W. Parker School (where she played on the boys' soccer team) and the University of Southern California.

Hannah made her film debut in 1978, making a brief appearance in Brian De Palma's horror film The Fury. She subsequently appeared in several early 1980s films, the most notable role of which is probably as the replicant, Pris, in Ridley Scott's 1982 film, Blade Runner. Hannah was cast as a mermaid in Ron Howard's 1984 fantasy, Splash, which was a major financial success, grossing over $62 million and establishing Hannah as a notable film actress.

Daryl Hannah as "Madison" from the film Splash.Hannah's roles in the remainder of the 1980s ranged from successful major roles in Steel Magnolias and the Academy Award-winning Wall Street, to the 1986 film version of The Clan of the Cave Bear, Hannah also played the title role in Fred Schepisi's 1987 film Roxanne, a modern retelling of Edmond Rostand's play Cyrano de Bergerac, a performance which was described as "sweet" and "gentle" by film critic Roger Ebert. She was also in the classic "The Pope of Greenwich Village" with co-stars Micky Rourke and Eric Roberts.

In the 1990s, Hannah's roles included starring as a giantess in the television movie Attack of the 50 Foot Woman (1993), which she also co-produced. She also appeared as the daughter of Jack Lemmon's character in both of the Grumpy Old Men films. In 1995, Hannah was chosen by Empire magazine as #96 of the "100 Sexiest Stars in film history". That same year, Hannah anticipated (by a decade) her Kill Bill role when she appeared as homicidal sociopath Leann Netherwood in The Tie That Binds.

Of Hannah's most recent roles, the best-known may be that of the one-eyed assassin Elle Driver in Kill Bill Volume 1 and Kill Bill Volume 2, directed by Quentin Tarantino. Her performance in these films, as well as her appearances in other recent films, including Northfork, Casa de los Babys and Silver City, have been described by some critics as a cinematic comeback for Hannah, who had not appeared in many mainstream films in the late 1990s and early 2000s.

Hannah wrote, directed and produced a short film, The Last Supper which won an award at the Berlin Film Festival. She directed, produced and was the cinematographer for the documentary "Strip Notes". The documentary, which aired on Channel 4 London and HBO, was about the research she did for her role in the Micheal Radford film "Dancing At The Blue Iguana"

To promote her appearance in the film "Kill Bill", Hannah posed nude in the November 2003 edition of Playboy Magazine. She later threatened to sue the magazine because she objected to one particular photo in the layout, claiming she had final say on all shots to be used in the pictorial.

Personal life
Hannah, a keen environmentalist, has her own weekly video blog, on sustainable solutions. She often is the sound, camera person and on-screen host for the blog. Her home runs on solar power and is built with green materials. She also drives a car that runs on biodiesel. In late 2006, she also volunteered to act as a judge for Treehugger.com's "Convenient Truths" contest.

Hannah has never married, but she had long-term relationships with John F. Kennedy, Jr. and singer Jackson Browne, and was romantically linked with actor Val Kilmer. She is the sister-in-law of well-known music producer Lou Adler, who is married to Hannah's sister, Page.

On June 13, 2006, Hannah was arrested – along with Joan Baez and Julia Butterfly Hill – for her involvement with over 350 farmers and their families and their supporters, confronting authorities trying to bulldoze the nation's largest urban farm in South Central Los Angeles. She chained herself to a walnut tree at the South Central Farm in south-central Los Angeles for three weeks in order to protest the farmers' eviction by the property's new owner. The farm had been established in the wake of the 1992 LA riots to allow people in the city to grow food for themselves. However, the land's new owner, who had paid $5 million for it, sought to evict the farmers to build a warehouse. He had asked for $16 million to sell it but turned down the offer when the activists raised that amount. Hannah was interviewed via cell phone shortly before she was arrested, along with forty four other protesters, and said that she and the others are doing the "morally right thing". She spent some time in jail.

Hannah was featured in a CNET article listing the "top 10 geek girls" where it was mentioned she was extremely shy during her youth and was even diagnosed as being "borderline autistic". In addition to 'Liebrary' she also created the boardgame 'Love It or Hate It'.

Daryl Hannah has worked to help end the problem of sexual slavery and is traveling around the world to make a documentary about the problem. According to America's Most Wanted, Hannah also works in Cambodia to free children used as sex slaves. Hannah is currently pregnant with her first child at the age of 46.