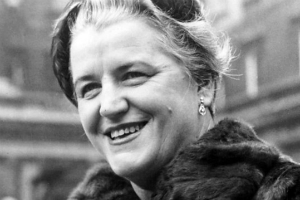 New Zealand opera singer, a mezzo-soprano noted particularly for her Puccini roles. Born in New Zealand, she moved to Sydney, Australia with her family when she was very young and was educated there, finishing with the Sydney conservatory.

Hammond began her musical career as a violinist, spending three years with the Sydney Philharmonic Orchestra.

In 1936, she went to Vienna to study with the Vienna Boys Choir and made her operatic debut in London, 1938.

During World War II she made many recordings and gave concerts for the troops. She toured throughout the world and was guest artist at the Royal Opera House, Covent Garden; the Liceo, Barcelona; the Netherlands Opera; the New York City Centre; the Vienna State Opera; the Bolshoi , Moscow; and the Elizabethan Theatre Trust, winning many awards including that of being made a dame in 1974. She was the first operatic diva to sell a million records, later becoming a voice teacher.

Hammond lived with her partner, Lolita Marriott for 62 years. She took up golf as a hobby and won championships cups.

Her papers were donated to the Library by Dame Joan

Hammond and her family in 1994 in two consignments, containing biographical notes, correspondence, programs, published scores, press cuttings, scrapbooks, diaries, photographs, speeches and writings. They related not only to her career as an opera singer and later as a teacher but also to her schooldays, her achievements in golf, and the Ash Wednesday bush fire in 1983.

The bulk of the papers relate to the period from 1983 to 1993 as much of Dame Joan's prior material was destroyed in the Ash Wednesday bush fires. The afternoon of 2/16/1983, wind, weather and ignition factors combined to start no less that ten major fires in the states of Victoria and South Australia. Dame Joan lost her house and her career's memorabilia at her home at Airey’s Inlet, Victoria, 105km south west of Melbourne. It was a major disaster in which 75 people died, 2,545 buildings were destroyed and over 390, 000 hectares of country burned.