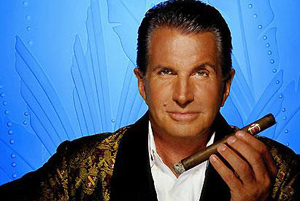 George Hamilton (born August 12, 1939) is an American film and television actor and occasional film director. He is noted for his perpetual, chestnut-colored suntan and his colorful private life.

Early life
Hamilton was born George Stevens Hamilton, the son of Ann Potter Hamilton Hunt Spaulding (née Stevens) and band leader George "Spike" Hamilton. He won many awards as a student at Palm Beach High School and was the lead in his high school's production of Brigadoon.

Career
Hamilton began his movie career in 1952. As an actor, he is often compared to (and sometimes confused with) Warren Beatty. In the mid-1980s, he starred in the 6th season of the ABC Aaron Spelling-produced nighttime television serial and Dallas imitator, Dynasty. Hamilton was a semi-regular panelist on the 1998 revival of Match Game.

In 2003, he hosted The Family, a reality television series on ABC spanning one season in 2003. It starred ten members from a traditional Italian-American family, who were each fighting for a $1,000,000 prize. In 2006, he competed in the second season of ABC's Dancing with the Stars and was voted off in round 6. At age 66 and recovering from knee injuries, Hamilton, unable to match the limber dance moves of his younger competitors, charmed the audience and judges with endearingly silly dances utilizing props including a Zorro mask and sword from his 1981 film Zorro, The Gay Blade. Hamilton is also noted for his appearances in Ritz Cracker and Wheat Thins Toasted Chips commercials and ads with Stacy Keibler, who in Dancing with the Stars, was his off-screen "sweetheart", with the tag line "I know toasted".

Along with a successful movie career, his style of dress is one of the reasons why his career has had stamina and may explain his continued notoriety. At one point he was known for having 100 bespoke suits in his closet. It has been said that his favorite tailor is in Panama. His reputation as 'the real James Bond' was noted as far back as 1981 in the movie The Cannonball Run, when a woman confuses Roger Moore, who played Bond at the time, with Hamilton.

In 2006, it was rumored Hamilton will replace Bob Barker on The Price is Right. He did an audition and in March 2007, TMZ reported that Hamilton was a frontrunner to replace Barker. At 67, Hamilton would be the oldest contender for the position, although it would not be an unprecedented move since other game show hosts (such as Who Wants to Be a Millionaire host Regis Philbin) have debuted at about the same age. According to Reuters, Hamilton is one of the final 3 contenders to host the show, alongside Mark Steines and Todd Newton. The New York Post reported in July 2007 an unconfirmed report that Hamilton was no longer in consideration and that Steines and Newton were the two remaining contenders. Soon thereafter, Drew Carey was named as Barker's successor.

Personal life
Hamilton was married to actress Alana Stewart from 1970 to 1975. Their son, Ashley Hamilton, was born in 1974. He has a younger son, George Thomas Hamilton, with Kimberly Blackford. He is known for his close personal friendship with Imelda Marcos, erstwhile first lady of the Philippines.

In April of 2006, Hamilton served as Grand Marshall for the 79th Annual Shenandoah Apple Blossom Festival in Winchester, Virginia.

Hamilton is not related to George Hamilton IV, the 1960s country singer.