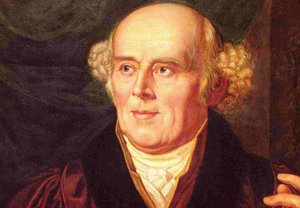 Life
Born Christian Friedrich Samuel Hahnemann in Meissen, Saxony, Hahnemann showed early proficiency at languages; "by twenty he had mastered English, French, Italian, Greek and Latin," and was making a living as a translator and teacher of languages. He later gained proficiency in "Arabic, Syriac, Chaldaic and Hebrew."

Hahnemann studied medicine at Leipzig and Vienna. He received his doctor of medicine degree at the University of Erlangen on 10 August 1779, qualifying with honors with a thesis on the treatment of cramps. He began practicing as a doctor in 1781. "Shortly thereafter he married Johanna Henriette Kuchler"; they had eleven children. While there are no known living descendants today of Hahnemann himself, there are a few of his older sister Charlotte's (1752-1812)

Through his practice, Hahnemann quickly discovered that the medicine of his day did as much harm as good:

My sense of duty would not easily allow me to treat the unknown pathological state of my suffering brethren with these unknown medicines. The thought of becoming in this way a murderer or malefactor towards the life of my fellow human beings was most terrible to me, so terrible and disturbing that I wholly gave up my practice in the first years of my married life and occupied myself solely with chemistry and writing.

After giving up his practice he made his living chiefly as a writer and translator. While translating William Cullen's A Treatise on the Materia Medica, Hahnemann encountered the claim that Cinchona, the bark of a Peruvian tree, was effective in treating malaria because of its astringency. Hahnemann realised that other astringent substances are not effective against malaria and began to research cinchona's effect on the human organism very directly: by self-application. He discovered that the drug evoked malaria-like symptoms in himself, and concluded that it would do so in any healthy individual. This led him to postulate a healing principle: "that which can produce a set of symptoms in a healthy individual, can treat a sick individual who is manifesting a similar set of symptoms." This principle, like cures like, became the first of a new medicinal approach to which he gave the name homeopathy.

Hahnemann began systematically testing substances for the effect they produced on a healthy individual and trying to deduce from this the ills they would heal. He quickly discovered that ingesting substances to produce noticeable changes in the organism resulted in toxic effects. His next task was to solve this problem, which he did through exploring dilutions of the compounds he was testing. He claimed that these dilutions, when done according to his technique of succussion (systematic mixing through vigorous shaking) and potentization, were still effective in producing symptoms. However, these effects have never been duplicated in clinical trials, and his approach has been universally abandoned by modern medicine.

Hahnemann began practicing this new technique, which soon attracted other doctors. He first published an article about the homeopathic approach in a German language medical journal in 1796; in 1810, he wrote his Organon of the Medical Art, the first systematic treatise on the subject.

Hahnemann continued practicing and researching homeopathy, as well as writing and lecturing for the rest of his life. He died in 1843 in Paris, 88 years of age, and is entombed in a mausoleum at Paris's Père Lachaise cemetery.

Although most famous today as the founder of homeopathy, this was not the sole focus of his research. Some of his other discoveries are still in use today, such as the potent Marsh test (for the presence of arsenic in solids). It involved combining a sample fluid with hydrogen sulfide in the presence of hydrochloric acid. A yellow precipitate, arsenic trisulfide, would be formed if arsenic were present.

Some of Hahnemann's notable works include:

Versuch über ein neues Prinzip zur Auffindung der Heilkräfte der Arzneisubstanzen, nebst einigen Blicken auf die bisherigen, (Hufelands Journal der practischen Arzneykunde, 1796)
The Organon of the Healing Art (1810) explains the theory of homeopathic medicine. Hahnemann published the 5th edition in 1833; an unfinished 6th edition was discovered after Hahnemann's death but not published until 1921.
Materia Medica Pura is a compilation of homoeopathic proving reports, published in six volumes during the 1820s (vol. VI in 1827.) Revised editions of volumes I and II were published in 1830 and 1833, respectively.
Chronic Diseases (1828) is an elucidation of the root and cure of chronic disease, according to the theory of homeopathy, together with a compilation of homoeopathic proving reports, published in five volumes during the 1830s.
Hahnemann strongly advocated good hygiene, fresh air, regular exercise, and good nutrition as beneficial to good health Hahnemann was also campaigned for the humane treatment of the insane in 1792, a year before William Tuke and Philippe Pinel.

Hahnemann also published tracts in which he described the cause of cholera as "excessively minute, invisible, living creatures". Hahnemann's acceptance of the emerging idea of infectious disease before its final proof by Robert Koch and Louis Pasteur indicates some of his medical views incorporated ideas that were at the cutting-edge of contemporary science at that time. These 17th-century epidemiological theories built on the ideas of Girolamo Fracastoro in the 16th century and the discovery of microbes by Anton van Leeuwenhoek one hundred years previously.