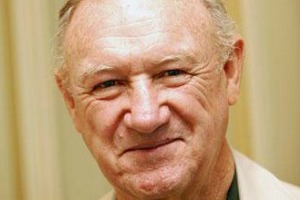 Gene Hackman (born Eugene Allen Hackman on January 30, 1930) is a two-time Academy Award-winning American actor. He came to fame during the 1970s, after his role in The French Connection, and has continued to appear in major roles in Hollywood films.

Early life
Hackman was born in San Bernardino, California, to Eugene Ezra Hackman, a newspaper pressman, and Lyda Gray. He has a brother, Richard. Hackman's parents divorced while he was a child, and he moved from one place to another until finally settling in Danville, Illinois, where he lived with his grandmother, Beatrice, who raised him.

His mother died in 1962, as a result of a fire she accidentally set while smoking. At sixteen, Hackman left home to join the U.S. Marine Corps, where he served 3 years as a field radio operator. Having finished his service, he moved to New York, working in several minor jobs before moving to study television production and journalism at the University of Illinois under the G.I. Bill.

1960s
Already over 30 years old, Hackman decided to become an actor, and joined the Pasadena Playhouse in California. It was there that he forged a friendship with another aspiring actor, Dustin Hoffman. Already seen as outsiders by their classmates, Hackman and Hoffman were later voted "The Least Likely To Succeed". Determined to prove them wrong, Hackman hopped on a bus bound for New York City. A 2004 article in Vanity Fair described how Hackman, Hoffman and Robert Duvall were all struggling actors and close friends while living in New York City in the 1960s. Hackman was working as a doorman when he ran into an instructor whom he had despised at the Pasadena Playhouse. Reinforcing "The Least Likely To Succeed" vote, the man had said "See Hackman, I told you you wouldn't amount to anything." (Some reports allege that it was one of his former drill instructors from the Marines who saw him there and told him this.)

Hackman began performing in several off-Broadway plays. Finally, in 1964, he had the offer to play on Broadway, which opened the door to film work. His first role was in Lilith, with Warren Beatty in the leading role. Another supporting role, Buck Barrow, in 1967's Bonnie and Clyde, earned him an Academy Award nomination as Best Supporting Actor.

1970s
In 1970, he was again nominated for the same award, this time for I Never Sang for My Father, working alongside Melvyn Douglas and Estelle Parsons. The next year he won the Best Actor award for his memorable performance as Popeye Doyle in The French Connection, marking his graduation to leading man status. He followed this with leading roles in the disaster film The Poseidon Adventure (1972) and Francis Ford Coppola's The Conversation (1974). That same year, Hackman appeared in one of his most famous comedic roles as the Blindman in Young Frankenstein. He later appeared in the star-studded war film A Bridge Too Far (1977), and showed a talent for both comedy and the "slow burn" as Lex Luthor in Superman: The Movie (1978) and Superman II (1980).

1980s
By the end of the 1980s, Hackman was a well respected actor and alternated between leading and supporting roles, earning another Best Actor nomination for Mississippi Burning, and appearing in such films as Reds, Under Fire, Hoosiers and Bat*21.

1990s
In 1990, he underwent heart surgery, which kept him away from work for a while, although he still found time for a remake of The Narrow Margin. In 1992, he played the violent sheriff Bill Daggett in the Clint Eastwood western Unforgiven, which earned him a second Oscar, this time for Best Supporting Actor, the film itself won Best Picture.

2000s
He starred in Heist as an aging professional thief of considerable skill who is forced into taking one final heist, all the while he has been "burned," his face having been seen on tape during a previous job. David Mamet wrote and directed the film, Delroy Lindo and Danny DeVito also starred.

Present
Despite probably lacking the iconic status of contemporaries, such as Robert De Niro, Al Pacino or Jack Nicholson, Hackman has an ability to disappear into the roles he plays, blending a character actor aesthetic with his leading man status. He is also unusually versatile, able to play hard-edged roles, such as in The French Connection and Mississippi Burning as well as convincing comedic turns in fare such as The Birdcage and The Royal Tenenbaums. Together with undersea archaeologist Daniel Lenihan, Hackman also wrote two novels: Wake of the Perdido Star (1999) and Justice for None (2004).

His distinctive voice can be heard in television commercials from time-to-time, notably for United Airlines, GTE, CNN, and more recently for Oppenheimer Funds and Lowe's Home Improvement. He will be using that talent as Police Supervisor Al Bressler in the Dirty Harry (video game), reuniting him with Unforgiven and Absolute Power star/director Clint Eastwood.

Personal life
Hackman's first wife was Faye Maltese. They had three children, Christopher Allen, Elizabeth Jean, and Leslie Anne, but the couple divorced in 1986 after 30 years of marriage. In 1991, Hackman married Betsy Arakawa. They live in Santa Fe, New Mexico. Betsy is co-owner of an upscale retail home-furnishing store in Santa Fe, called Pandora's, Inc. On July 7, 2004, Hackman gave a rare interview to Larry King, in which he announced that he had no future film projects lined up, and believes his acting career is over.