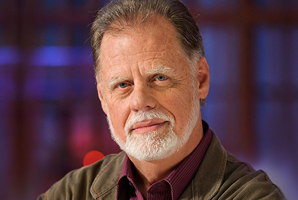 Taylor Edwin Hackford (born December 31, 1944) is an American film director, and the former president of the Directors Guild of America.

Hackford was born in Santa Barbara, California, the son of Mary (née Taylor), a waitress, and Joseph Hackford. He graduated from the University of Southern California in 1968, where he was a pre-law major focusing on international relations and economics. After graduating, he served as a Peace Corps volunteer in Bolivia, where he started using Super 8 film in his spare time. He decided that he did not want to pursue a career in law, and instead got a mailroom position at KCET-TV.

Richard Gere balked at shooting the ending of Hackford's movie An Officer and a Gentleman, where his character arrives at his lover's factory wearing his Navy dress whites and carries her off from the factory floor. Gere thought the ending would not work because it was too sentimental. Hackford was initially inclined to agree with Gere until during a rehearsal the extras playing the workers began to cheer and cry. When Gere saw the scene later with the music underneath it at the right tempo, he said it sent chills up the back of his neck. Gere is now convinced Hackford made the right decision. Hackford kept Lou Gossett Jr. in separate living quarters from the other actors during An Officer and a Gentleman so he could intimidate them more during his scenes as a drill instructor.

About his film, The Idolmaker, Hackford stated: "I make films about working-class people; showbusiness is one of those things through which people can get themselves out of the lower rung of society. To me, the compelling story in The Idolmaker is the guy with a wonderful talent and a fairly strong ego has [that] to make it happen through puppets." The Idolmaker starred Ray Sharkey. A Golden Globe for Best Actor was awarded to Sharkey for his portrayal of "Vinnie" in the film. The Music Supervisor was Richard Flanzer. Hackford stated about his movie Ray: "My proudest moments in Ray were in those 'chitlin' clubs. Ray Charles ended his life in concert halls, where people would go in tuxedos and quietly listen to a genius perform. But in these clubs, he had to get people up dancing. What I tried to create was a little of that energy and exuberance. The great thing about music is when you can get people on their feet."

In a 2005 interview, he confirmed that he never watched his own films, "When I finish a film, I put it away and I never look at it again. Occasionally I do now because of the DVDs and the commentary tracks. I usually put it aside and go onto the next. I never went to film school. I worked for the KCET public television station in L.A. I worked in concerts. I have done a lot of music. I feel very comfortable shooting music, and I think you can see that."

Hackford has directed music videos, including "Against All Odds (Take a Look at Me Now)" by Phil Collins and "Say You, Say Me" by Lionel Richie.

On July 25, 2009, Hackford was elected President of the Directors Guild of America. He was re-elected to a second, two-year term as President on June 25, 2011, at the DGA's National Biennial Convention in Los Angeles.

Hackford has been married to Academy Award-winning actress Helen Mirren since 1997. Hackford met Mirren when he was directing her in White Nights although their first meeting did not go well. He kept her waiting to audition for White Nights, and she was icy. "It was a strange way to meet Helen, because she is a lovely person," says Hackford, "but she didn’t hold back her fury." Hackford and Mirren wed in 1997 after 12 years together. As a young woman Mirren had vowed never to marry.

Hackford has two grown children from his two previous marriages.