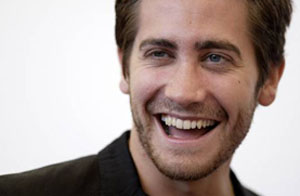 The son of director Stephen Gyllenhaal and screenwriter Naomi Foner, Gyllenhaal began acting at age eleven, and his short career has seen performances in diverse roles. He has received an Academy Award nomination and won a British Academy of Film and Television Arts Award.

Gyllenhaal's first major film appearance was in 2001's cult hit Donnie Darko, in which he played a teenager troubled by psychological problems. In the 2004 blockbuster The Day After Tomorrow, he portrayed a student caught in a cataclysmic global cooling event alongside Dennis Quaid. He then played against type as a confused and frustrated Marine in Jarhead (2005) and, that same year, won critical acclaim as a "gay cowboy" in the controversial but highly lauded film, Brokeback Mountain.

Gyllenhaal has taken an activist role in supporting various political and social causes. He appeared in Rock the Vote advertising, campaigned for the Democratic party in the 2004 election, and has promoted environmental causes and the American Civil Liberties Union.

Family
Members of the Gyllenhaal family have worked together on many Hollywood projects. His sister Maggie played his on-screen sister in Donnie Darko, and appeared with him in A Dangerous Woman, a film which their father, Stephen Gyllenhaal, directed. Maggie is engaged to actor Peter Sarsgaard, Gyllenhaal's co-star in Jarhead. Gyllenhaal's niece, Ramona Sarsgaard, was born on October 3, 2006. Both Gyllenhaal and his sister admit to sibling rivalry in their younger years, but often share problems and advice nowadays. In December, 2006, they escaped a fire that destroyed Manka's, a famed lodge and restaurant in Inverness, California, at which they were vacationing. Jamie Lee Curtis is Gyllenhaal's godmother, and he has repeatedly referred to his godfathers being a gay couple. Gyllenhaal himself is the godfather of Matilda Rose Ledger (born October 28, 2005), the daughter of actors Heath Ledger and Michelle Williams, both of whom co-starred with him in Brokeback Mountain. Additionally, his uncle, Anders Gyllenhaal, is the executive editor of The Miami Herald.

Relationships
Gyllenhaal dated Rilo Kiley singer Jenny Lewis in 2001, but his most notable relationship has been with actress Kirsten Dunst. The couple, who met through Gyllenhaal's sister Maggie (Dunst's Mona Lisa Smile co-star), began dating in September 2002, and were reported to have officially broken up in July 2004; however, the relationship remained off and on until December 2005.

With Dunst, Gyllenhaal shares a German Shepherd named Atticus, whom they rescued from a Los Angeles dog shelter. Gyllenhaal also owns a Puggle named Boo Radley. Both dogs are named after characters from the Harper Lee novel To Kill a Mockingbird, one of Gyllenhaal's favorite novels.

Internationally viewed as a sex symbol, Gyllenhaal was named one of People magazine's "50 Most Beautiful People" in 2006. He was also listed in People's "Hottest Bachelors of 2006".

Politics and other interests
Gyllenhaal is politically active; he shot a commercial for Rock the Vote, and during the 2004 U.S. Election, he visited the University of Southern California with his sister to encourage students to vote. He also campaigned for Democratic candidate John Kerry. He has stated, however, that "it frustrates me when actors talk politics; I’m political and I make choices in my movies that I think are political. I try and say things with what I do. Rightly or wrongly, young actors have all the power."

Raised in a family concerned with social issues, Gyllenhaal has campaigned on behalf of the American Civil Liberties Union (ACLU), an organization which his entire family strongly supports. Environmentally conscious, he recycles regularly, and said in an interview that he spends $400 a year on having trees planted in a Mozambique forest, partly to promote the Future Forests program. After filming The Day After Tomorrow, he flew to the Arctic to promote awareness of climate change.

In his spare time, Gyllenhaal enjoys woodworking, and cooking. He has stated " not a card-carrying Buddhist, but I do try to practice mindfulness" and he makes it his goal to meditate every day..