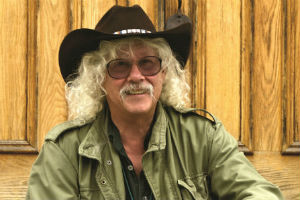 Arlo Davy Guthrie (born July 10, 1947) is an American folk singer. Like his late father, Woody Guthrie, Arlo is known for singing songs of protest against social injustice. One of Guthrie's better-known works is "Alice's Restaurant", a satirical talking blues song about 18 minutes in length.

Arlo Guthrie was born in Brooklyn, New York, the son of folk singer and composer Woody Guthrie and his wife Marjorie Mazia Guthrie. His sister is record producer Nora Guthrie. His mother was a one-time professional dancer with the Martha Graham Company and founder of the Committee to Combat Huntington's disease, the disease that took Woody's life in 1967. His maternal grandmother was renowned Yiddish poet Aliza Greenblatt. His father was from a Protestant family and his mother was Jewish; Guthrie received religious training for his bar mitzvah from Rabbi Meir Kahane, who would go on to form the Jewish Defense League. "Rabbi Kahane was a really nice, patient teacher," Guthrie later recalled, "but shortly after he started giving me my lessons, he started going haywire. Maybe I was responsible."

Guthrie attended Woodward School in Clinton Hill, Brooklyn 1st through 8th grades and later graduated from the Stockbridge School, in Stockbridge, Massachusetts, in 1965, and briefly attended Rocky Mountain College in Billings, Montana. He received an Honorary Doctorate from Westfield State College, in 2008.

As a singer, songwriter and lifelong political activist, Guthrie carries on the legacy of his legendary father. He was awarded the Peace Abbey Courage of Conscience award on September 26, 1992.

His most famous work is "Alice's Restaurant Massacree", a talking blues song that lasts 18 minutes and 34 seconds in its original recorded version. Guthrie has pointed out that this was also the exact length of one of the famous gaps in Richard Nixon's Watergate tapes. He has been known to spin the story out to forty-five minutes in concert. The Alice in the song is Alice Brock, who had been librarian at Arlo's boarding school in town before opening her restaurant, and who now owns an art studio in Provincetown, Massachusetts.

The song lampoons the Vietnam War draft. However, Guthrie stated in a 2009 interview with Ron Bennington that the song is more an "anti-stupidity" song than an anti-war song, adding that it is based on a true incident. In the song, Guthrie is called up for a draft examination, and rejected as unfit for military service as a result of a criminal record consisting in its entirety of a single arrest, court appearance, fine, and clean-up order for littering and creating a public nuisance on Thanksgiving Day in 1965, when Arlo was 18 years old. Alice and her restaurant make up the recurrent refrain, but barely figure in the story. On the DVD commentary for the 1969 movie, Guthrie states that the events presented in the song all actually happened.

For a short period of time after its release in 1967, "Alice's Restaurant" was heavily played on U.S. college and counter-culture radio stations. It became a symbol of the late 1960s and for many it defined an attitude and lifestyle that were lived out across the country in the ensuing years. Its leisurely, sassy finger-picking acoustic guitar and rambling lyrics were widely memorized and played by irreverent youth. Many stations across the States have made playing "Alice's Restaurant" a Thanksgiving Day tradition.

A 1969 film, directed and co-written by Arthur Penn, was based on the true story told in the song, but with the addition of a large number of fictional scenes. This film, also called Alice's Restaurant, featured Arlo portraying himself. The part of his father Woody Guthrie, who had died in 1967, was played by an actor, Joseph Boley.

Despite its popularity, the song "Alice's Restaurant Massacree" is not always featured on the set list of any given performance.

The "Alice's Restaurant" song was one of a few very long songs to become popular just when albums began replacing hit singles as young people's main music listening. But in 1972 Guthrie had a highly successful single too, Steve Goodman's song "City of New Orleans", a wistful paean to long-distance passenger rail travel. Guthrie's first trip on that train was in December 2005 (when his family joined other musicians on a train trip across the country to raise money for musicians financially devastated by Hurricane Katrina and Hurricane Rita, in the South of the United States). He also had a minor hit with his song "Coming into Los Angeles," which was played at the 1969 Woodstock Festival, and success with a live version of "The Motorcycle Song."

Guthrie's 1976 album Amigo received a 5-star (highest rating) from Rolling Stone, and may be his best-received work. However, that album, like Guthrie's earlier Warner Bros. Records albums, is rarely heard today even though each contains strong folk and folk rock music accompanied by widely regarded musicians such as Ry Cooder.

In the fall of 1975 during a benefit concert in Massachusetts, Arlo Guthrie performed with his band Shenandoah in public for the first time. They continued to tour and record throughout the 1970s until the early 1990s. Although the band received good reviews, it never gained the popularity that Guthrie did while playing solo.

This band is not to be confused with the popular country music group Shenandoah, an entirely different group that had musical hits from 1986 to 2006. Arlo Guthrie's band Shenandoah consisted (after 1976) of David Grover, Steve Ide, Carol Ide, Terry A La Berry and Dan Velika.

Though Guthrie is best known for being a musician, singer, and composer, throughout the years he has also appeared as an actor in films and on television. The film Alice's Restaurant (1969) is his best known role, but he has had small parts in several films and even co-starred in a television drama, Byrds of Paradise.

Guthrie has had minor roles in several movies and television series. Usually, he has appeared as himself, often performing music and/or being interviewed about the 1960s, folk music and various social causes. His television appearances have included a broad range of programs from The Muppet Show (1979) to Politically Incorrect (1998). A rare dramatic film part was in the 1992 movie Roadside Prophets. Guthrie's memorable appearance at the 1969 Woodstock Festival was documented in the Michael Wadleigh film Woodstock.

Guthrie also made a pilot for a TV variety show called "The Arlo Guthrie Show" in February, 1987. The hour-long program included story telling and musical performances and was filmed in Austin, Texas. It was broadcast nationally on PBS. Special guests were Pete Seeger, Bonnie Raitt, David Bromberg and Jerry Jeff Walker.

A registered Republican, Guthrie endorsed Texas Congressman Ron Paul for the 2008 Republican Party nomination. He said, "I love this guy. Dr. Paul is the only candidate I know of who would have signed the Constitution of the United States had he been there. I'm with him, because he seems to be the only candidate who actually believes it has as much relevance today as it did a couple of hundred years ago. I look forward to the day when we can work out the differences we have with the same revolutionary vision and enthusiasm that is our American legacy." He told The New York Times Magazine that he is a Republican because, "We had enough good Democrats. We needed a few more good Republicans. We needed a loyal opposition."

About once a month, Guthrie posts short writings to the Announcements area of www.arlo.net, often sounding libertarian themes. However, on February 1, 2011, his post was to promote the cause of the public employee unions being opposed by Wisconsin Republicans, and to favor the cause of labor unions in general. Previously Guthrie had made comments in public disparaging musicians' unions and stating that he had refused to join one.

In earlier years, at least from the 1960s to the 1980s, Guthrie had taken a decidedly leftist approach to American politics. In his often lengthy comments during concerts his expressed positions were consistently anti-war, anti-Nixon, pro-drugs and in favor of making nuclear power illegal. However, he apparently regarded himself as more an individualist than the major youth culture spokesperson he had been regarded as by the media, as evidenced by the lyrics in his 1979 song "Prologue": "I can remember all of your smiles during the demonstrations, ... and together we sang our victory songs though we were worlds apart."

In 1984, he was the featured celebrity in George McGovern's campaign for the Democratic presidential nomination in Guthrie's home state of Massachusetts, performing at rallies and receptions.

From  his father, Woody Guthrie, Guthrie often sings songs of protest against social injustice. He collaborated with poet Adrian Mitchell to tell the story of Chilean folk singer and activist Víctor Jara in song. He regularly performed with folk musician Pete Seeger, one of his father's longtime partners. Ramblin' Jack Elliott, who had lived for two years in the Guthries' home before Arlo left for boarding school, had absorbed Woody's style perhaps better than anyone; Arlo has been said to have credited Elliott for passing it along to him. In 1991, Guthrie bought the church that had served as Alice and Ray Brock's former home in Great Barrington, Massachusetts, and converted it to the Guthrie Center, an interfaith meeting place that serves people of all religions. The center provides weekly free lunches in the community and support for families living with HIV/AIDS as well as other life-threatening illnesses. It also hosts a summertime concert series and Guthrie does six or seven fund raising shows there every year. There are several annual events such as the Walk-A-Thon to Cure Huntington's Disease and a "Thanksgiving Dinner That Can't Be Beat" for families, friends, doctors and scientists who live and work with Huntington's disease.

Guthrie resides in the town of Washington, Massachusetts where he and Jackie Hyde, his wife of 43 years, were long time residents. Jackie died on October 14, 2012 after a brief battle with liver cancer. Guthrie's son Abe Guthrie and his daughters Annie, Sarah Lee Guthrie and Cathy Guthrie have also become musicians. Annie Guthrie writes songs and performs, and also takes care of family touring details. Sarah Lee performs and records with her husband Johnny Irion. Cathy plays ukulele in Folk Uke, a group she formed with Amy Nelson, the daughter of Willie Nelson. Abe Guthrie was formerly in a folk-rock band called Xavier, and now tours with his father. Abe Guthrie's son, Krishna, is a drummer and toured with Arlo Guthrie on his European tour in 2006[citation needed] and played guitar for the 2009–2010 Tour. Krishna plays drums in Modest Me and aspires to be the lead of his own band some day. Arlo Guthrie is a grandfather of Abe's son Krishna and daughter Serena, Annie's son Shiva Das (Mo) and daughter Jacklyn, Sarah Lee's daughters Olivia Nora and Sophia Irion and Cathy's daughter Marjorie Maybelle Midwood.

Arlo Guthrie is mentioned in Tim Winton's novel The Riders – shortlisted for the Booker Prize in 1995. A character in the novel overhears locals in the small Irish town of Shinrone, recount the night Arlo Guthrie came to play. The actual event occurred in February 1988, when Arlo played the local gymnasium in Shinrone, County Offaly. The concert was organised by a local postman, Tom Stapleton