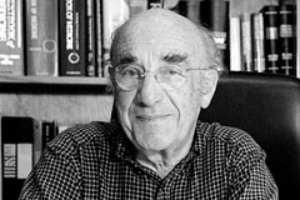 Roger Charles Louis Guillemin (born January 11, 1924 in Dijon, Bourgogne, France) received the National Medal of Science in 1976, and the Nobel prize for medicine in 1977 for his work on neurohormones, sharing the prize that year with Andrew Schally and Rosalyn Sussman Yalow.

Completing his undergraduate work at the University of Burgundy, Guillemin received his M.D. degree from the Medical Faculty at Lyon in 1949, and went to Montreal, Quebec, Canada, to work with Hans Selye at the Institute of Experimental Medicine and Surgery at the Université de Montréal where he received a Ph.D. in 1953.

The same year he moved to the United States to join the faculty at Baylor College of Medicine at Houston. In 1965, he became a naturalized citizen of the United States. In 1970 he helped to set up the Salk Institute in La Jolla, California where he worked until retirement in 1989.

Guillemin and Andrew V. Schally discovered the structures of TRH and GnRH in separate laboratories. The process of this scientific discovery at Guillemin's laboratory is the subject of a study by Bruno Latour and Steve Woolgar, published as Laboratory Life.

Guillemin signed along with other Nobel Prize winners a petition requesting a delegation of the Committee on the Rights of the Children of the United Nations to visit a Tibetan child who is under house arrest in China since 1995, namely Gendhun Choekyi Nyima, recognized as the 11th Panchen Lama by the 14th Dalai Lama, Tenzin Gyatso.

American Academy of Arts and Sciences, 1976

Nobel Prize in Physiology or Medicine, 1977