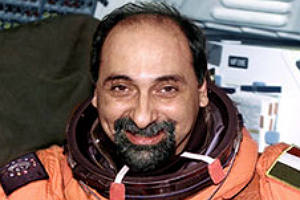 Umberto Guidoni (born in Rome 18 August 1954) is an Italian politician and a former ESA astronaut. He is a veteran of two NASA space shuttle missions. He was a Member of the European Parliament (MEP) from 2004 to 2009.

Guidoni earned a doctorate in astrophysics from the University of Rome La Sapienza in 1978 and worked in the Italian Space Agency (ASI) as well as in the European Space Agency (ESA). One of his research projects was the Tethered Satellite System, which was part of the payload of the STS-46 mission. Guidoni trained as an alternate payload specialist for this mission and made his first spaceflight aboard the Space Shuttle Columbia STS-75 in 1996, which included the second flight of the TSS system (TSS-1R).

In 2001, Guidoni participated in the Space Shuttle's STS-100 mission, being the first European on board  International Space Station (ISS).

On that flight, the Space Shuttle Endeavour carried the Raffaello Multi-Purpose Logistics Module for its maiden flight as well as the Space Station Remote Manipulator System (SSRMS), the Canadian robotic arm used extensively to assemble the ISS.

In September 2001, Guidoni was assigned to ESA's European Space Research and Technology Centre (ESTEC) as crew support for the payloads to be developed for the Columbus Laboratory. Columbus and its payloads are the European contribution to the scientific research performed on board the International Space Station. He retired from active astronaut status in June 2004.

Member of the European Parliament

In June 2004 Guidoni was elected to the European Parliament, in the Group of the European United Left (GUE/NGL). He was a member of the Committee on Budgetary Control and the Committee on Industry, Research and Energy (ITRE), and substitute of the Committee on the Environment, Public Health and Food Safety (ENVI), and the Temporary Committee on Climate Change. He has been rapporteur for the Seventh Framework Programme (FP7) for Research and Innovation. He also proposed the emendament 16 to protect the freedom of the press from the strict application of the EU directive (IPRED2) on criminal measures aimed at ensuring the enforcement of intellectual property rights.

In 2007 was the speaker of the radio program entitled “From the Sputnik to the Shuttle” (the series "At 8 in the evening" by Radio Rai 2), in which he retraced the main steps of the Space Era. In 2009, he presented another cycle of the same series where he narrated the epic history of the Apollo lunar missions. Starting from this program, in 2011, was published the book “From the Earth to the Moon”.

Guidoni is involved in popularizing science and organizes events related to space. He published articles and books including books for children such as "Martino on Mars", "Astrolibro" and "so Extra, so terrestrial".* Così extra, così terrestre, Editoriale Scienza, 2013

On 11 May 2001, he was appointed Grande Ufficiale dell'Ordine al merito della Repubblica Italiana by Carlo Azeglio Ciampi, President of Italy.

A second Space Flight Medal was awarded after his second space flight of 2001 (STS-100).

For his achievements in space, Guidoni received the NASA Exceptional Service Medal in 2002.