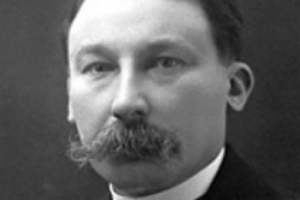 François Auguste Victor Grignard (May 6, 1871 in Cherbourg - December 13, 1935 in Lyon) was a Nobel Prize-winning French chemist.

Grignard was the son of a sail maker. After studying mathematics at Lyon he transferred to chemistry and discovered the synthetic reaction bearing his name (the Grignard reaction) in 1900.

He became a professor at the University of Nancy in 1910 and was awarded the Nobel Prize in Chemistry in 1912. During World War I he studied chemical warfare agents, particularly the manufacture of phosgene and the detection of mustard gas. His counterpart on the German side was another Nobel Prize winning Chemist, Fritz Haber.

Grignard is most noted for devising a new method for generating carbon-carbon bonds using magnesium to couple ketones and alkyl halides. This reaction is valuable in organic synthesis. It occurs in two steps:

Formation of the "Grignard reagent", which is an organomagnesium compound made by the reaction an organohalide, R-X (R = alkyl or aryl; and X is a halide, usually bromide or iodide) with magnesium metal. The Grignard reagent is usually described with the general chemical formula R-Mg-X, although its structure is more complex.

Addition of the carbonyl, in which a ketone or an aldehyde is added to the solution containing the Grignard reagent. The carbon atom that is bonded to Mg transfers to the carbonyl carbon atom, and the oxygen of the carbonyl carbon becomes attached to the magnesium to give an alkoxide. The process is an example of a nucleophilic addition to a carbonyl. After the addition, the reaction mixture is treated with aqueous acid to give an alcohol, and the magnesium salts are subsequently discarded.

The Grignard reaction is an important means of preparing organic compounds from smaller precursor molecules. For this work, Grignard was awarded the Nobel Prize in Chemistry in 1912 jointly with fellow Frenchman Paul Sabatier.