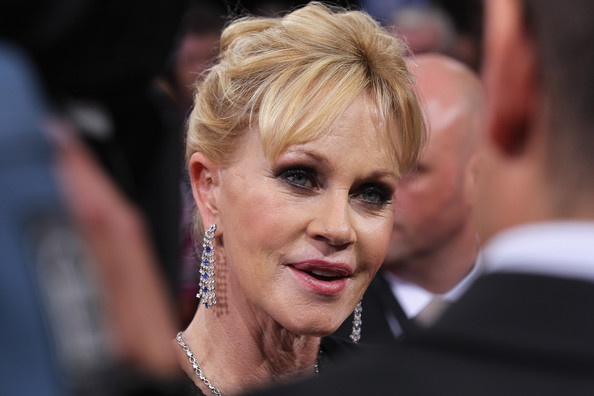 She is the only child of actress Tippi Hedren who is of Swedish, German and Norwegian descent and eldest child of Peter Griffith of English descent. Her parents divorced when she was four years old, and her father would remarry and have two children: actress, Tracy Griffith and set designer, Clay Griffith.

Griffith began work at just 9 months old in a commercial and later became an extra on Smith! (1969) and The Harrad Experiment (1973). Her first major role was in Arthur Penn's Night Moves (1975), which got her attention and typecast her as a sexy nymphet. Substance abuse problems derailed her career for nearly a decade. Her comeback started with Brian De Palma's Body Double (1984).

It also led to her starring role in Jonathan Demme's Something Wild (1986). That led to her playing the title role in Mike Nichols' Working Girl (1988) which became a hit. She earned an Academy Award nomination as Best Actress and won the Golden Globe award as Best Actress - Motion Picture Musical or Comedy. The films that followed were Brian De Palma's The Bonfire of the Vanities (1990), Milk Money (1994), John Waters' Cecil B. DeMented (2000), and Two Much (1995), where she met her husband Antonio Banderas.

Griffith has been married four times. She was briefly married to Don Johnson in 1976. She was married to Steven Bauer from 1980 to 1987. She remarried Johnson in 1989. The couple divorced again in 1996 and Griffith married her current husband Antonio Banderas that same year. Griffith has three children by three husbands: Alexander Griffith Bauer (born in 1985); Dakota Mayi Johnson (born in 1989); and Stella del Carmen Banderas Griffith (born in 1996). Dakota followed in her mother's footsteps and served as Miss Golden Globe at the 2006 Golden Globes award ceremony. Griffith was Miss Golden Globe in 1975.

Griffith's television work includes playing actress Marion Davies in HBO television movie RKO 281 (1999) for which she received an Emmy nomination as Best Supporting Actress. She was also seen on The WB sitcom Twins (2005-2006), in which she played Lee, the mother of the show's main characters played by Sara Gilbert and Molly Stanton.

Late in her career, Griffith made her stage debut at the Old Vic in London, England, where she acted with Cate Blanchett in the Vagina Monologues in February, 1999. Four years later, she made her Broadway debut, playing Roxie in the musical "Chicago" in 2003. An untrained performer in song and dance, she still managed to get a rave review from "The New York Times" theatre critic Ben Brantley who wrote: "Ms. Griffith is a sensational Roxie, possibly the most convincing I have seen," and the "vultures who were expecting to see Ms. Griffith stumble. . .will have to look elsewhere". Audiences packed the theater to see her. Her husband Antonio Banderas was appearing across the street in another musical "Nine," at the same time.