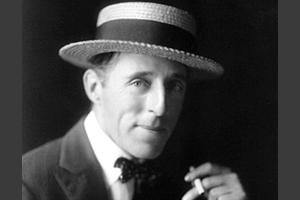 American stage actor and road manager before entering film, when he became a pioneer director and producer in blossoming Hollywood. He produced the first full-length feature in 1915, "Birth of a Nation."

Starting out as a writer working for "Biograph" studio, he sold a number of stories. Getting more and more involved, Griffith’s career led to general director by the fall of 1913, eventually directing over 450 films. He showed a remarkable instinctive understanding of the creative potential behind the camera.

The sudden improvement in the quality of the productions did not go unnoticed by the public. Many of Griffith’s films were imported into other countries and studied by film pupils and directors. Unfortunately as time went by, he signed with various studios, each time giving up a piece of his creativity, losing the quality that was originally his and suffering through many financial roller-coasters.

His legacy to the film industry not entirely forgotten, Griffith received an honorary Academy Award in 1935 for "his distinguished creative achievements as director and producer and his invaluable initiative and lasting contributions to the progress of the motion picture arts."

Griffith made his first marriage to young actress Linda Arvidson in 1906 and a short second marriage to Evelyn Baldwin in 1936. Although he owned a ranch in California, Griffith didn’t settle there but spent the majority of his time in a succession of apartments-hotels. He died of cardiac arrest on 7/23/1948, Hollywood, CA.