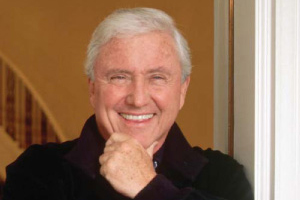 American entertainer and TV host, a singer and pianist with credits in radio and nightclubs, a horse breeder, hotelier, gentleman rancher and billionaire. His eponymous talk show ran from 1962 to 1985, after which he transformed himself from a successful performer into a powerful and diversified mogul worth more than a billion dollars.

As a boy growing up in San Mateo, Griffin sang in the choir. He was the son of a tennis pro and a housewife who lived Depression era hardships, losing their house to the bank. As a kid, he put on garage shows every Saturday, yard carnivals for which he recruited every kid on the block, always the Producer. A vastly overweight kid, he was 5' 9" and 240 lbs, with a fragile ego. At 17, he was working as a clerk at the local Crocker Bank and occasionally playing the organ at church funerals.

At his 18th birthday, a remarkable occurrence made a turning point. He was walking along the train tracks wondering where his life was headed when suddenly, a voice came to him out of nowhere and said "You will never again be a private person." He started to cry. After then things started changing, almost miraculously. Within the year, an audition for a job playing the piano on radio in San Francisco led to a singing spot on a show with a three-piece orchestra which, within two days, was renamed "The Merv Griffin Show." An overweight kid with acne, he was suddenly making over a thousand dollars a week and being billed as "America's New Romantic Singing Star." Finally, in 1946 he bit the bullet and went on a steak-and-salad diet with which he dropped 20 pounds a month until he hit 160. He later wrote that it was "the first of one thousand two hundred forty-one diets."

In 1950, a song that Griffin recorded, "I've Got a Lovely Bunch of Cocoanuts" shot to No.1 on the Hit Parade, and he became a sensation. Once during an engagement at the Palladium in Hollywood, 6,000 people rushed the stage while he was singing. He spent years as a singer with Freddie Martin's orchestra and he made a few movies with Warner Bros. such as "Boy from Oklahoma" and "So This is Love" with Kathryn Grayson. It was his skill on the tennis court with which he became close to Jack Warner, the studio boss.

He was nominated as an Outstanding Personality in a Variety Program or Series for the 1962/1963 season. His show unabashedly loved the glamour of Hollywood; movie stars, TV stars, singers, authors, animal trainers, royalty; any good act. For 7,000 shows, Griffin stared intently into the eyes of Celebrity X and uttered his signature "Oooooh!"

He began to flex some serious financial muscle in the '80s, tabbed by Forbes magazine as the wealthiest entertainer in the U.S. with a personal fortune that runs over $1 billion. He has the rights to such successful game shows as "Wheel of Fortune" and "Jeopardy," from which proceeds he built an empire that included production facilities and prime real estate. In 1986 he sold most of these holdings to Coca-Cola for $250 million.

On 9/12/1988, he established the Griffin Group, a conglomerate of seven different companies. The largest entity, Griffin Hotels, operates eight luxury properties, hotels and dude ranches in Arizona, California and Florida. Merv Griffin Productions, his second-biggest company, is the event-planning organization behind the Golden Globes, the Council of Fashion Designers of America awards, and many movie premiers. In 1998 they had four movies and ten TV shows in development. The smaller businesses include the Merv Griffin Ranch Company, which breeds and trains racing and thoroughbred horses and develops real estate, and La Merveille Cie, a joint cosmetics venture with his friend Princess Elizabeth of Yugoslavia.

On 11/15/1989, he overbid Donald Trump for control of Resorts International in Atlantic City, with four more hotels in the Bahamas, for about $300 million.

His home near Palm Springs, one of four, burned to the ground in October 1989. Following that, his private jet crashed on take-off, with no injuries.

Griffin was divorced in 1976 from Julann, his wife of 17 years with whom he had one son, Tony, in 1960. He often spends weekends with Eva Gabor at his ranch in Carmel. Amiable but restless, Merv prefers low-key entertaining, quiet dinners at home.

The talented entertainment billionaire was admitted to a Los Angeles hospital in mid-July 2007 with a recurrence of prostate cancer and died on August 12, 2007 at age 82.