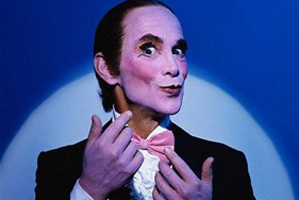 Grey was the son of comedian, singer, musician and parodies, Mickey Katz. He began his show business career at the age of ten at the Cleveland Ohio theater. As a child, he loved to play with a make-up kit given to him by his parents. He had a loving childhood in which his parents called him their "Golden Boy." At 16, he appeared in his father's stage revue. At 18 he appeared on the Eddie Cantor show, 1950 and within a year, was singing at New York's Copacabaña club and at the London Palladium. He was an ambitious and cocky entertainer between the ages of 18 and 20. By the age of 20, he made his film debut in "About Face" and appeared in TV and theater productions. Despite his early work success, Grey had not become famous in show business.

His big break arrived at 34 when he won the role of the sly and androgynous emcee in the Broadway hit, "Cabaret," 1966. He won the Tony Award for Best Supporting Actor in the musical for his performance. He reprised his role on the big screen under the direction of Bob Fosse acting opposite Liza Minnelli. He received accolades reached star status and took home the Oscar Award for Best Supporting Actor in 1972.

The theater remained the outlet for many of Grey's talents. He played the stage lead in "The Grand Tour," 1979 and wore the hat of director of Anthony Quinn in a world tour of the musical "Zorba." In 1986, Grey performed his one-man show "Tricks of the Trade" dedicated to his father's enormous musical influence on his life. Mickey Katz saw his son's show before he died in 1986.

At 27, Grey married, and he and his wife experienced the heartbreaking loss of their first child. His daughter Jennifer was born in 1963 and his son Jim in 1964. Jennifer followed her father and grandfather into a show business career. She was seen in the films "Ferris Bueller's Day Off"' and "Dirty Dancing." Grey's marriage ended in 1983 after 24 years.

Grey demands professionalism from the people he works with on stage. He does not want to work with people who are not dedicated or indifferent about their profession. He admires the work of Charlie Chaplin, Laurence Olivier, and James Cagney.