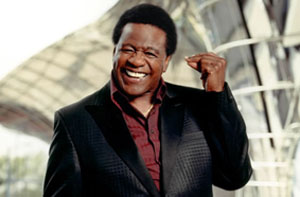 Early years
Green was born in Dansby, Arkansas. The son of a sharecropper, he started performing at age nine in a Forrest City quartet called the Greene Brothers; he dropped the final "e" from his last name years later as a solo artist. They toured extensively in the mid-1950s in the South until the Greenes moved to Grand Rapids, Michigan, when they began to tour around Michigan. His father kicked him out of the group because he caught Al listening to Jackie Wilson.

Green formed a group called Al Greene & the Creations in high school. Curtis Rogers and Palmer James, two members of the Creations, formed an independent label called Hot Line Music Journal. In 1967, under the new name Al Greene & the Soul Mates, the band recorded "Back Up Train" and released it on Hot Line Music; the song was an R&B chart hit. The Soul Mates' subsequent singles did not sell as well. Al Greene's debut LP was released on Hot Line in 1967 called "Back Up Train". The album was upbeat and soulful but didn't do well in sales. This was the only album on the Hot Line label. Green came into contact with band leader Willie Mitchell of Memphis' Hi Records in 1969, when Mitchell hired him as a vocalist for a Texas show with Mitchell's band and then asked him to sign with the label.

Rise to stardom
Mitchell predicted stardom for Green, coaching him to find his own, unique voice at a time when Green had previously been trying to sing like his heroes Jackie Wilson, Wilson Pickett, James Brown, and Sam Cooke. Green's debut album with Hi Records was Green Is Blues, a slow, horn-driven album that allowed Green to show off his powerful and expressive voice, with Mitchell arranging, engineering and producing. The album was a moderate success. The next LP, Al Green Gets Next to You (1970), was a massive success that included four gold singles as Green developed his vocal and songwriting talents. Let's Stay Together (1972) was an even bigger success, as was I'm Still In Love With You (1972). Call Me was a critical sensation and just as popular at the time; it is one of his most fondly remembered albums today. Al Green Explores Your Mind (1974) contained the song "Take Me to the River", later covered by the Talking Heads on their second album.

Return to Faith
On October 18, 1974, Mary Woodson, a longtime friend of Al Green, assaulted him, then killed herself. It is believed that she ardently wished to be more than just a friend to Al Green. One night, she left the guest quarters, then entered the main section of the house without permission. She sneaked into his bathroom to make a surprise attack. With no warning whatsoever, she threw a large pot of sticky boiling grits over him as he was undressed and preparing to shower. As Al Green writhed in pain, she ran into another part of the house and committed suicide by shooting herself.

Investigations found that Mary Woodson had committed this terrible act because she suffered a mental breakdown. Her mental instability caused her to interpret Al Green as having rejected her wish to discuss marriage with him, even though their relationship had never progressed past friendship. This assault from behind caused third-degree burns on his back, stomach and arms. Deeply shaken by the injuries, the nature of the assault and the loss of this friend who was very dear to him, Green continued to reaffirm and grow closer to his deeply held love for God. He became an ordained pastor of the Full Gospel Tabernacle in Memphis in 1976. Continuing to record R&B, Green saw his sales start to slip and the critics grew steadily harsher.

1977's The Belle Album was critically acclaimed but did not regain his former mass audience. In 1979, Green was injured while performing, and interpreted this accident as a message from God. He then concentrated his energies towards pastoring his church and gospel singing, also appearing in 1982 with Patti Labelle in the Broadway musical Your Arms Too Short to Box with God. His first gospel album was The Lord Will Make a Way. From 1981 to 1989 Green recorded a series of gospel recordings, garnering eight "soul gospel performance" Grammys in that period. In 1984 director Robert Mugge released a documentary film, Gospel According to Al Green, including interviews about his life and footage from his church.

After spending several years exclusively performing gospel, Green began to return to R&B. First, he released a duet with Annie Lennox, "Put A Little Love In Your Heart" for Scrooged, a 1988 Bill Murray film. In 1989 Green worked with producer Arthur Baker writing and producing the international hit "The Message Is Love". In 1992, Green recorded again with Baker, The Fine Young Cannibals, and reunited with his former Memphis mix engineer (this time functioning as producer) Terry Manning, to release the album "Don't Look Back". His 1994 duet with country music singer Lyle Lovett blended country with R&B, garnering him his ninth Grammy, this time in a pop music category. Green's first secular album in some time was Your Heart's In Good Hands (1995), released to positive reviews but disappointing sales, the same year Green was inducted into the Rock and Roll Hall of Fame.

In 2000, Green published Take Me to the River, a book discussing his career. Green received a Grammy Lifetime Achievement Award in 2002.

By 2003 Green released a non-religious (secular) album entitled I Can't Stop, his first collaboration with Willie Mitchell since 1985's He is the Light. In March 2005 he issued Everything's OK as the follow up to I Can't Stop. Green also collaborated with Mitchell on this secular CD.

In 2004, Green was inducted into the Gospel Music Association's Gospel Music Hall of Fame. Green still continues to tour, and to preach at the Full Gospel Tabernacle in Memphis, Tennessee. Also in 2004, Rolling Stone Magazine ranked him #65 on their list of the 100 Greatest Artists of All Time.

Most recently, Al Green has been in the studio with The Roots' Ahmir "?uestlove" Thompson, working on Green's next album for Blue Note Records.