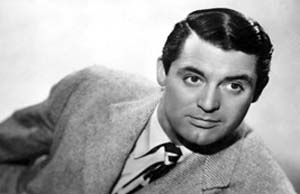 Archibald Alec Leach (January 18, 1904 (birth time source: Astrodatabank) – November 29, 1986), better known by his screen name, Cary Grant, was an iconic English film actor. With his distinctive Mid-Atlantic accent, he was noted as perhaps the foremost exemplar of the debonair leading man, handsome, virile, charismatic and charming. He was named the second Greatest Male Star of All Time of American cinema, after Humphrey Bogart, by the American Film Institute.

Early life and career
Archibald Alec Leach was born in Horfield, Bristol, England in 1904. He attended Bishop Road Primary School. An only child, he had a confused and unhappy childhood. His mother Elsie was placed by his father in a mental institution when Archie was ten. She had apparently never overcome her depression after the death of a previous child in infancy. His father, who had a son with another woman, told him that she had gone away on a "long holiday". It was only when he was in his thirties that he discovered she was still alive, and institutionalized.

After being expelled from Fairfield Grammar School in Bristol in 1918, he joined the "Bob Pender stage troupe" and travelled with the group as a stilt walker to the United States in 1920, on the RMS Olympic for a two-year tour. When the troupe returned to England, he decided to stay in the U.S. and continue his stage career.

Hollywood stardom
After some success in light Broadway comedies, he came to Hollywood in 1931, where he acquired the name Cary Grant.

His stardom owes a great deal to Mae West. Grant became a star when Mae West chose him for her leading man in two of her most successful films, She Done Him Wrong and I'm No Angel (both 1933). (Encyclopedia Britannia, Cary Grant biography)

Her next release was I'm No Angel, which paired her with Grant again. "I'm No Angel" was nominated for an Academy Award for "Best Picture." It was a tremendous financial success and, along with She Done Him Wrong, saved Paramount from bankruptcy.

Grant starred in some of the classic screwball comedies, including Bringing Up Baby with Katharine Hepburn, His Girl Friday with Rosalind Russell and Arsenic and Old Lace with Priscilla Lane. His role in The Awful Truth with Irene Dunne was the pivotal film in the establishment of Grant's screen persona. These performances solidified his appeal, and The Philadelphia Story, with Hepburn and James Stewart, showcased his best-known screen persona: the charming if sometimes unreliable man, formerly married to an intelligent and strong-willed woman who first divorced him, then realized that he was — with all his faults — irresistible.

Grant was one of Hollywood's top box-office attractions for several decades. He was a versatile actor, who did demanding physical comedy in movies like Gunga Din with the skills he had learned on the stage. Howard Hawks said that Grant was "so far the best that there isn't anybody to be compared to him".

Grant was a favorite actor of Alfred Hitchcock, notorious for disliking actors, who said that Grant was "the only actor I ever loved in my whole life". Grant appeared in such Hitchcock classics as Suspicion, Notorious, To Catch a Thief and North by Northwest.

In the mid-1950s, Grant formed his own production company, Grantley Productions, and produced a number of movies distributed by Universal, such as Operation Petticoat, Indiscreet, That Touch of Mink (co-starring Doris Day), and Father Goose.

Grant was nominated for two Academy Awards in the 1940s. He was denied the Oscar throughout his active career as he was considered a maverick by virtue of the fact that he was the first actor to "go independent," effectively bucking the old studio system, which almost completely controlled what an actor could or could not do. In this way, Grant was able to control every aspect of his career. Grant received a special Academy Award for Lifetime Achievement in 1970. In 1981, he was accorded the Kennedy Center Honors.

In the last few years of his life, Grant undertook tours of the United States in a one man show. It was called "A Conversation with Cary Grant", in which he would show clips from his films and answer audience questions. It was just before one of these performances in Davenport, Iowa, on November 29, 1986, that Grant suffered a stroke and died.

Marriages
Grant's first wife, Virginia Cherrill, divorced him on March 26, 1935 following charges that Grant had hit her. They married on February 10, 1934.

Grant became a naturalized U.S. citizen in 1942 in order to defuse the scandal resulting from his failure to return to Britain to serve in the military. Grant married ultra-wealthy socialite Barbara Hutton and became a surrogate father and lifelong influence on her son, Lance Reventlow, who later died in a plane crash. The couple were derisively nicknamed "Cash and Cary," although in an extensive prenuptial agreement Grant refused any financial settlement in the event of a divorce. After divorcing in 1945, they remained lifelong friends.

Grant married third wife, actress Betsy Drake, on December 25, 1949. Grant appeared with her in two films. This would prove to be his longest marriage, ending on August 14, 1962. Drake introduced Grant to LSD, and in the early '60s he related how treatment with the hallucinogenic drug — legal at the time — at a prestigious California clinic had finally brought him inner peace after yoga, hypnotism, and mysticism had proved ineffective.

His fourth marriage to actress Dyan Cannon, who was thirty-three years his junior, took place on July 22, 1965 in Las Vegas. The marriage was followed by the premature birth of his only child, Jennifer Grant, on February 26, 1966 when Grant was sixty-two. He frequently called her his "best production", and regretted that he hadn't had children sooner. The marriage was troubled from the beginning and Cannon left him in December 1966, claiming that Grant flew into frequent rages and spanked her when she "disobeyed" him. The divorce, finalized in 1968, was bitter and public, and custody fights over their daughter went on for around ten years.

On April 11, 1981 Grant married his long-time companion, British hotel PR agent Barbara Harris, who was forty-seven years his junior. Harris was by his side when he died.


Rumours of bisexuality
Throughout his time in Hollywood, Grant was rumoured to be homosexual or bisexual. In 1932 he met fellow actor Randolph Scott on the set of Hot Saturday. The two shared a rented beach house, known as "Bachelor Hall", on and off for twelve years. In 1944, Grant and Scott stopped living together but remained close friends throughout their lives. Rumors ran rampant at the time that Grant and Scott were lovers.

In their biographies of Grant, Marc Eliot and Charles Higham and Roy Moseley contend that Grant was bisexual. Higham and Moseley claim that Grant and Scott were seen kissing in a public carpark outside a social function both attended in the 1960s. In his book, Hollywood Gays, Boze Hadleigh cites an interview with homosexual director George Cukor, who commented on the alleged homosexual relationship between Scott and Grant: "Oh, Cary won't talk about it. At most, he'll say they did some wonderful pictures together. But Randolph will admit it – to a friend." Randolph Scott told his son that he and Cary Grant did not have a homosexual relationship. It has been written that Cary Grant stated, regarding homosexuality and actors, "They say that about everyone".

Homosexual screenwriter Arthur Laurents indicated that Grant was bisexual. In his memoir, he says, Grant "told me he threw pebbles at my window one night but was luckless – I wasn't home. ... his eyes and his smile implied that ... he would have liked doing what we would have done had I been home. William J. Mann's book Behind the Screen: How Gays and Lesbians Shaped Hollywood, 1910-1969 recounts how photographer Jerome Zerbe spent "three gay months" in the movie colony taking many photographs of Grant and Scott, "attesting to their involvement in the gay scene." Zerbe says that he often stayed with the two actors, "finding them both warm, charming, and happy." In addition, Darwin Porter's book, Brando Unzipped (2006) claims that Grant had a homosexual affair with Marlon Brando.

Grant himself always denied the rumours. When comedian Chevy Chase joked about Grant being gay in a television interview with Tom Snyder in 1980 ("Oh, what a gal!") Grant sued him for slander; they settled out of court. Grant complained to writer/director Peter Bogdanovich about the Chevy Chase incident, emphatically insisting that while he had many gay friends, including Cukor, William Haines, and costume designer Orry-Kelly, that while he had nothing against homosexuals, he was not one himself.

In a 2004 interview for the Turner Classic Movies production, Cary Grant: A Class Apart, Grant's third wife, Betsy Drake, also denied the rumors, saying, "I didn't have time to think about his homosexuality. We were too busy fucking."

Politics
Grant was a Republican. He introduced First Lady Betty Ford to the audience at the Republican National Convention in 1976. He was opposed to McCarthyism and defended Charles Chaplin in 1953.

In 2001 a statue of Grant was erected in Millennium Square, a regenerated area next to the harbor in his city of birth — Bristol, England.

In November 2004 Grant was named "The Greatest Movie Star of All Time" by Premiere Magazine.

Ian Fleming stated that he partially had Cary Grant in mind when he created his suave super-spy, James Bond. Sean Connery was selected for the first James Bond movie because of his likeness to Grant. Likewise, the later Bond, Roger Moore, was also selected for sharing Grant's wry sense of humor.