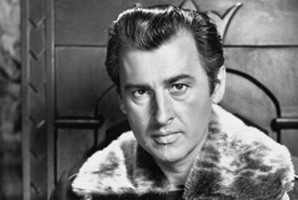 Stewart Granger (6 May 1913 – 16 August 1993) was an English film actor, mainly associated with heroic and romantic leading roles. He was a popular leading man from the 1940s to the early 1960s rising to fame through his appearances in the Gainsborough melodramas.

He was born James Lablache Stewart in Old Brompton Road, west London, the only son of Major James Stewart, OBE and his wife Frederica Eliza (née Lablache). Granger was educated at Epsom College and the Webber Douglas Academy of Dramatic Art. He was the great-great grandson of the opera singer Luigi Lablache and the grandson of the actor Luigi Lablache. When he became an actor, he was advised to change his name in order to avoid being confused with the American actor James Stewart. (Granger was his Scottish grandmother's maiden name.) Off-screen friends and colleagues continued to call him Jimmy for the rest of his life, but to the general public he became Stewart Granger.

In 1933, he made his film debut as an extra. It was at this time he met Michael Wilding and they remained friends until Wilding's death in 1979. Years of theatre work followed, initially at Hull Repertory Theatre and then, after a pay dispute, at Birmingham Repertory Theatre. Here he met Elspeth March, a leading actress with the company, who became his first wife.

At the outbreak of war, Granger enlisted in the Gordon Highlanders, then transferred to the Black Watch with the rank of second lieutenant. But Granger suffered from stomach ulcers - he was invalided out of the army in 1942.

His first starring film role was in the Gainsborough Pictures period melodrama The Man in Grey (1943), a film that helped to make him a huge star in Britain. A string of popular but critically dismissed films followed, including The Magic Bow in which Granger played Niccolò Paganini and Madonna of the Seven Moons (1945) which the critic Leslie Halliwell called "novelettish balderdash killed stone dead by stilted production". An exception was Saraband for Dead Lovers (1948), an Ealing Studios production. The screenplay was by John Dighton and Alexander Mackendrick, who would later direct The Ladykillers (1955) and Sweet Smell of Success. Granger was cast as the outsider, the handsome gambler who is perceived as 'not quite the ticket' by the established order, the Hanoverian court where the action is mostly set. Granger stated that this was one of few films of his of which he was proud.

That year Granger made Adam and Evelyne, starring with Jean Simmons. The story, about a much older man and a teenager whom he gradually realises is no longer a child but a young woman with mature emotions and sexuality had obvious parallels to Granger's and Simmons's own lives. Granger had first met the very young Jean Simmons when they both worked on Gabriel Pascal's Caesar and Cleopatra (1945). Three years on, Simmons had transformed from a promising newcomer into a star - and a very attractive young woman. They married the following year in a bizarre wedding ceremony organised by Howard Hughes - one of his private aircraft flew the couple to Tucson, Arizona, where they were married, mainly among strangers, with actor Michael Wilding as Granger's best man.

After Granger's stage production of Leo Tolstoy's The Power of Darkness (a venture he had intended to provide a vehicle for him to star with Jean Simmons) had been very poorly received when it opened in London at the Lyric Theatre on 25 April 1949, the disappointment, added to dissatisfaction with the Rank Organisation, led his thoughts to turn to Hollywood.

One of his last roles was in the 1989-90 Broadway production of The Circle by W. Somerset Maugham, opposite Glynis Johns and Rex Harrison in Harrison's final role. The production actually opened at Duke University for a three-week run, followed by performances in Baltimore and Boston before opening 14 November 1989 on Broadway.

In 1949, Granger made the move; MGM was looking for someone to play H. Rider Haggard's hero Allan Quatermain in a film version of King Solomon's Mines. On the basis of the huge success of this film, released in 1950, he was offered a seven-year contract by MGM. Following two less successful assignments, Soldiers Three and The Light Touch, in 1952, he starred in Scaramouche in the role of Andre Moreau, the bastard son of a French nobleman, a part Ramón Novarro had played in the 1923 version of Rafael Sabatini's novel. Soon after this came the remake of The Prisoner of Zenda (1952), for which his theatrical voice, stature (6'3"; 191 cm) and dignified profile made him a natural.

In 1952 he and Jean Simmons sued Howard Hughes for $250,000 damages arising from an alleged breach of contract. The case settled out of court.

In Moonfleet (1955), Granger was cast as an adventurer, Jeremy Fox, in the Dorset of 1757, a man who rules a gang of cut-throat smugglers with an iron fist until he is softened by a 10-year-old boy who worships him and who believes only the best of him. The film was directed by Fritz Lang and produced by John Houseman, a former associate of Orson Welles. Footsteps in the Fog was the third and final film Granger and Jean Simmons made together - Simmons played a Cockney housemaid who finds that her adventurer employer (Granger) has poisoned his rich wife in order to inherit her wealth. Bhowani Junction (1956), was adapted from a John Masters novel about colonial India on the verge of obtaining independence. Ava Gardner played an Anglo-Indian (mixed race) woman caught between the two worlds of the British and the Indians, and Granger the British officer with whom (in a change from the novel) she ultimately fell in love. His films The Little Hut (1957), a coy sex comedy, and Gun Glory (1957), a Western story of redemption, both bombed. North to Alaska with John Wayne, 'a brawling comedy western', was the last Hollywood film Granger made.

Granger had become a successful cattle rancher but he left Hollywood in the wake of the break up of his second marriage.

In Germany, Granger acted in the role of Old Surehand in three Western films adapted from novels by German author Karl May, with French actor Pierre Brice (playing the fictional Indian chief Winnetou), in Unter Geiern (Frontier Hellcat) (1964), Der Ölprinz (Rampage at Apache Wells) (1965) and Old Surehand (Flaming Frontier) (1965). He was united with Pierre Brice and Lex Barker, also a hero of Karl May films, in Gern hab' ich die Frauen gekillt (Killer's Carnival) (1966). In the German Edgar Wallace film series of the 1960s, he was seen in The Trygon Factor (1966). He lated estimated he made more than $1 1/2 million in the 1960s but lost all of it.

He subsequently replaced actor Lee J. Cobb, Charles Bickford and John McIntire on NBC's The Virginian as the new owner of the Shiloh ranch on prime-time TV for its ninth year (1971).

In the 1970s Granger retired from acting and went to live in southern Spain, where he invested in real estate. He returned to acting in 1981 with the publication of his autobiography, claiming he was bored. Granger spent the last decade of his life appearing in TV shows and on the stage. He even starred in a German soap-opera called Das Erbe der Guldenburgs (The Guldenburg Heritage) (1987).

He was married three times:

Jean Simmons (1950–1960), (with whom he had starred in Adam and Evelyne, Young Bess and Footsteps in the Fog); one daughter, Tracy

Stewart Granger claimed in his autobiography that Deborah Kerr had approached him romantically in the back of his chauffeur-driven car at the time he was making Caesar and Cleopatra. Although married to Elspeth March, he states that he and Kerr went on to have an affair. Deborah Kerr disputed this claim, commenting, "He should be so lucky."

In 1956, Granger became a naturalised citizen of the United States.

He died in Santa Monica, California from prostate cancer at the age of 80.