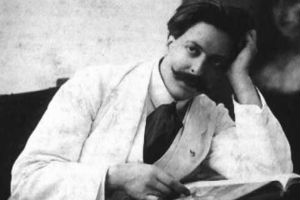 Enrique Granados Campiña (27 July 1867 – 24 March 1916) was a Spanish pianist and composer of classical music. His music is in a uniquely Spanish style and, as such, is representative of musical nationalism.

The personal papers of Enrique Granados are preserved in, among other institutions, the Biblioteca de Cataluña.

He was born in Lérida, Spain, the son of Calixto Granados, a Spanish army captain, and Enriqueta Campiña. As a young man he studied piano in Barcelona, where his teachers included Francisco Jurnet and Joan Baptista Pujol. In 1887 he went to Paris to study. He was unable to become a student at the Paris Conservatoire, but he was able to take private lessons with a conservatoire professor, Charles-Wilfrid de Bériot, whose mother, the famed soprano Maria Malibran, was of Spanish ancestry. Bériot insisted on extreme refinement in tone production, which strongly influenced Granados’s own teaching of pedal technique. He also fostered Granados's abilities in improvisation.[2] Just as important were his studies with Felip Pedrell. He returned to Barcelona in 1889. His first successes were at the end of the 1890s, with the zarzuela Maria del Carmen, which attracted the attention of King Alfonso XIII.

In 1911 Granados premiered his suite for piano Goyescas, which became his most famous work. It is a set of six pieces based on paintings of Francisco de Goya. Such was the success of this work that he was encouraged to expand it. He wrote an opera based on the subject in 1914, but the outbreak of World War I forced the European premiere to be canceled. It was performed for the first time in New York City on 28 January 1916, and was very well received. Shortly afterwards, he was invited to perform a piano recital for President Woodrow Wilson. Prior to leaving New York, Granados also made live-recorded player piano music rolls for the New-York-based Aeolian Company's "Duo-Art" system, all of which survive today and can be heard – his very last recordings.

The delay incurred by accepting the recital invitation caused him to miss his boat back to Spain. Instead, he took a ship to England, where he boarded the passenger ferry Sussex for Dieppe, France. On the way across the English Channel, the Sussex was torpedoed by a German U-boat, as part of the German World War I policy of unrestricted submarine warfare. In a failed attempt to save his wife Amparo, whom he saw flailing about in the water some distance away, Granados jumped out of his lifeboat and drowned. He had a morbid fear of water for his entire life, and he was returning from his first-ever series of ocean voyages. The ship broke in two parts and only one sank (along with 80 passengers). Ironically, the part of the ship that contained his cabin did not sink and was towed to port, with most of the passengers on board. Granados and his wife left six children: Eduard (a musician), Solita, Enrique (a swimming champion), Víctor, Natàlia, and Francisco.

Granados' "Danza No. 5" is one of the 12 danzas españolas (1890) for piano. It is commonly transcribed for classical guitar as presented here by Sharon Isbin at the White House Classical Music Student Workshop Concert (2009-11-04)

Granados wrote piano music, chamber music (a piano quintet, a piano trio, music for violin and piano), songs, zarzuelas, and an orchestral tone poem based on Dante's Divine Comedy. Many of his piano compositions have been transcribed for the classical guitar: examples include Dedicatoria, Danza No. 5, Goyescas.

Granados was an important influence on at least two other important Spanish composers and musicians, Manuel de Falla and Pablo Casals. He was also the teacher of composer Rosa García Ascot.