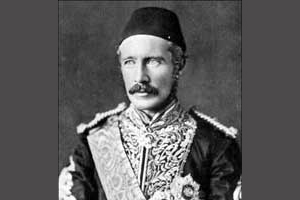 British soldier and administrator. He served in the Crimean War and went to China in the expedition of 1860, taking part in the capture of Beijing. In 1863 he took over the command of F. T. Ward, who had raised a Chinese army to suppress the Taiping Rebellion, which had destroyed 600 cities. Gordon took command of the "Ever Victorious Army," gaining the name "Chinese Gordon." Under his command it truly was ever victorious, helping the Emperor to put down the rebellion.

Upon Gordon's resignation of his command in 1864, the Emperor promoted him to the rank of Ti Tu (similar in rank to a field marshal) in the Imperial Army, even though he was only a captain in the British Army. He returned to England covered with glory.

The son of Lieutenant-General Henry William Gordon, R.A., Charles entered the Military Academy after being privately schooled at Taunton, and became an officer in the Engineers. He was extremely religious, believing in a strict interpretation of the Bible, which he read for pleasure and for guidance at least one hour a day. Some accounts claim he seldom drank where others relate a large consumption of brandy. He did not like the formal socializing and wining and dining that could be involved in army life. With his strict sense of duty, he found it a waste of his time. If he did not feel that he was being productive, he would resign or ask for a transfer. His homosexuality was apparently discreet, as many accounts make no mention of it: indeed, he was such an outstanding hero that he was largely portrayed as having the virtues of a saint. According to all biographers, Gordon was an extremely talented military leader and strategist, with a knack for pulling men together and forming them into a fearsome fighting force.

In 1873 he entered the service of the Khedive of Egypt, succeeding Sir Samuel Baker as governor of Equatorial Sudan. Appointed the governor of Sudan in 1877, he waged a vigorous campaign against slave traders. He resigned in 1879.

Sudan in the mid-19th century was in a very confused state. In the 1820s, Egypt, with the help of the British, invaded and unified northern Sudan (called Cush) and made it a subject state of Egypt, then part of the Ottoman empire. The government in Egypt was headed by an Armenian Khedive appointed by the Ottomans. The Khedive employed a number of foreigners (Europeans, Americans, and Turks) in his government and army. In the mid-19th century, the British became more officially involved in the Egyptian conquest of Sudan. They saw the strategic importance in terms of trade routes to India via the newly opened Suez Canal, and they wanted to limit the influence of the French in Africa. The slave trade was booming in the Sudan. Slavery was an accepted, if unpleasant, fact of life there, but it greatly offended the sensibilities of the foreign European governments who took an interest in the region. Throughout the Islamic world there had been talk of the coming of a new Prophet, or Mahdi. He would be known to the people because he would "have flashing eyes, be devout, and come from the east."

After various appointments in India, China, Mauritius, and Cape Colony (South Africa), Gordon was sent back to Sudan, where Muhammad Ahmad, the Mahdi, an Islamic fundamentalist calling himself the "expected one," was allied with the slave raiders and had acquired control. Gordon loved the Sudanese people and determined to save them from slavery by the Mahdi. Always at the head of his men and first in the thick of the fight, Gordon never carried a weapon, but only a light walking-stick. He rarely got hurt; once, when shot in the leg, he kept it to himself for the sake of his men until his fainting state revealed the fact. The Chinese soldiers regarding his as a sacred life and his men gave him their inalienable loyalty. "Slightly built, somewhat below the average height, Gen. Gordon's most remarkable characteristic at first sight was his childlike simplicity of speech and manners. At the age of 50, his face was still boyish in it’s youthfulness, his step light and his movements lithe.

Under attack by the Mahdi’s numberless hordes, Gordon held the fort at Khartoum for month after month. When Britain's prime minister tried to force him home by denying him relief, Gordon replied, "I am in honor bound to the people." Although under orders to evacuate the Egyptian garrison from Khartoum, Gordon took it upon himself to attempt to defeat the Mahdi. He was cut off and besieged at Khartoum for ten months. A relief expedition belatedly dispatched from England reached the garrison two days after it had been stormed by the Mahdists, who killed Gordon on 1/26/1885.

Gordon's death stirred public indignation and contributed to the collapse of the Gladstone government in 1885.