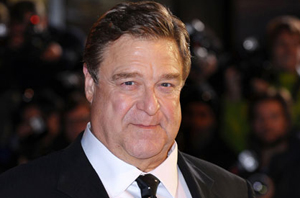 John Stephen Goodman (born June 20, 1952) is a Golden Globe- and Emmy-winning American actor, perhaps best known for his roles on the television series Roseanne, and in several Hollywood films.

Early life
Goodman was born in Affton, Missouri, the son of Virginia, a store clerk and waitress who worked at Jack and Phil's Bar-B-Cue, and Leslie Goodman, a postal worker who died from a heart attack in 1954. He has a sister, Elisabeth, and a brother, Leslie. Goodman went to Affton High School and won a football scholarship at Southwest Missouri State University, now called Missouri State University. He pledged the Sigma Phi Epsilon fraternity, but was not formally initiated until several decades later. During his college stint, he decided to become an actor, leaving Missouri for New York in 1975. He performed off-Broadway, in dinner theatres and in television commercials before getting character roles in movies during the early 1980s. One of his earliest roles was Pap Finn in the Broadway musical Big River, and he can be heard on the original cast album.

Career
Goodman is famous for his role as Dan Conner on the American sitcom, Roseanne, which aired on ABC from 1988 to 1997. He has a long history of appearances on late night comedy shows, being the first guest on Late Night with Conan O'Brien, receiving the show's "First Guest Medal" (Goodman joked that he would pawn the medal for a bottle of cheap scotch). He has been a popular guest host on NBC's Saturday Night Live, having hosted the show twelve times (Goodman once auditioned to be a castmember for Jean Doumanian's 1980-1981 tumultuous SNL season, but was rejected). His many appearances on Saturday Night Live can be partially attributed to his recurring role as Linda Tripp during the Lewinsky scandal.

Goodman is noted for his work in numerous films by Joel and Ethan Coen, including Raising Arizona, Barton Fink, The Big Lebowski, and O Brother, Where Art Thou?. In the film King Ralph, he played a goodtimer who unexpectedly becomes the official head of state after the royal family dies in a freak electrical accident. In television, Goodman had a recurring role on The West Wing as fictional House Speaker Glen Allen Walken. In the show, his character briefly served as Acting President when President of the United States Josiah Bartlet yielded power temporarily under the terms of the 25th Amendment to the United States Constitution. Goodman also recently played an ornery judge on Sorkin's newest show, Studio 60 on the Sunset Strip, earning a 2007 Emmy for Outstanding Guest Actor - Drama Series for his performance. He voiced Robot Santa in the character's first appearance on Futurama. Beginning in 2007, Goodman has been the voiceover in Dunkin' Donuts commercials.

Goodman replaced John Belushi as Dan Aykroyd's partner in the popular Blues Brothers Band, in which he first appeared as "Mighty" Mack McTeer on Saturday Night Live on March 25, 1995 and co-starred in the film Blues Brothers 2000. He continued to perform with Aykroyd (Elwood Blues) and Jim Belushi (Zee Blues) through 2001. Health problems eventually forced Goodman to retire the character.

Goodman's most recent project is the film version of Speed Racer in which he plays the character of Pops, Speed Racer's father.

Louisiana connection
Goodman has long resided in New Orleans, Louisiana. Since Hurricane Katrina, Goodman has appeared on several recovery commercials aired in Louisiana. Additionally, Goodman was at one time slated to play the role of Ignatius Reilly, the main character of a A Confederacy of Dunces by John Kennedy Toole. The story takes place almost entirely in New Orleans. However, the movie was never put into production and was scrapped.