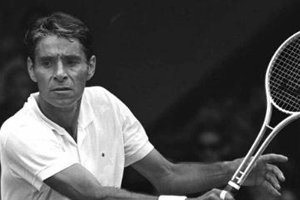 Mexican-American tennis champ, known for a strong serve and fiery on-court personality, a winner of the U.S. singles title in 1948 and 1949. In 1969, 20 years later, Gonzales won a 112-game marathon that spanned 5 hours and 12 minutes over two days of play. His sportsmanship and dignified bearing were as legendary as his fits of temper.

Coming from a poor Hispanic family, he struggled to win acceptance in the country-club world of tennis. With skill and grace, he became one of the greatest and most colorful tennis champions, and was elected to the Sports Hall of Fame. Gonzales once said, "My control of matches was to penetrate, create a weakness and attack.

My legs, retrieving, lobs and change-of-pace service returns meant as much or more to me than my power. But people overlooked that because of the reputation of my serve."

When Gonzales joined a fledgling pro tour, the move removed him from the spotlight in the prime of his career. He won eight pro singles titles in a nine-year span from 1953 to 1961. He was champion of the pro tour eight times in a row from 1963-70. After 1972, he moved to Las Vegas with his third wife to become the tennis director at Caesars Palace, an expensive hotel and entertainment complex.