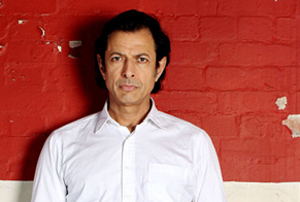 Jeffrey Lynn Goldblum (born October 22, 1952) is an Academy-Award nominated American actor. He often portrays quirky, intense or eccentric characters, and frequently scientists. He is also known for his distinctive appearance and his unique, staccato delivery of lines.

At 6 feet 4 inches 1/2 (1.94 m), he is one of Hollywood's tallest actors and was jokingly described on the sitcom Will & Grace as resembling a "tall, sexy whooping crane". He recently portrayed the title character on the NBC television series Raines which was cancelled after seven episodes.

Early life
Goldblum was born in the Pittsburgh suburb of Whitaker, Pennsylvania, to Shirley, a radio moderator, and Harold Goldblum, a doctor. He has a sister, Pamela, as well as two brothers. Both of his parents were interested in showbusiness. His family was Jewish, belonged to an Orthodox synagogue, and were of Eastern European origin, with Goldblum's paternal grandfather having immigrated from Russia. Goldblum moved to New York City at 17 to become an actor. Goldblum worked on the stage and studied acting at the renowned Neighborhood Playhouse under the guidance of acting coach Sanford Meisner. He made his Broadway debut in a production of The Two Gentlemen of Verona. He is an excellent jazz piano singer, and declared that should he not act, he would spend his life for music. His film debut was playing a rapist thug in the 1974 Charles Bronson classic Death Wish. He briefly appeared as a protester in the TV movie Columbo:A Case of Immunity (1975).

Career
Goldblum has had leading roles in films such as The Fly and The Tall Guy. Goldblum's strong supporting roles include those in Invasion of the Body Snatchers (1978), The Big Chill (1983), Into the Night (1985), Earth Girls Are Easy (1988), Jurassic Park (1993), and Independence Day (1996). He also had strong supporting roles in The Life Aquatic with Steve Zissou (2004) and the 1984 cult film The Adventures of Buckaroo Banzai Across the Eighth Dimension.

Goldblum was the voice for most of the US Apple commercials, including the ones for the iBook. He also voices some of the US Toyota commercials as well as Procter & Gambles facial cream line. He has recently appeared on Irish TV in commercials for the National Lottery.

Goldblum teaches acting at Playhouse West in North Hollywood, along with Robert Carnegie. It was with several actors from this acting company that he improvised and directed the live action short film, Little Surprises, which was nominated for an Academy Award in 1996. According to gossip columnist Caffeinated Clint (as of Sept 2006) Goldblum will not be reprising his role as Ian Malcolm in the upcoming film Jurassic Park IV.

The upcoming film Adam Resurrected is a film adaptation of the Yoram Kaniuk novel about a former circus clown who becomes the ringleader to a group of Holocaust survivors in an asylum after World War II. Goldblum was asked to take on the role of Adam, the story's main character, while visiting Israel for the first time in the summer of 2006.

In September 2006, it was announced that Goldblum was one of the founding members of a new theater company in New York called The Fire Dept. According to press materials, "The Fire Dept is made up of established and emerging writers, directors, actors and designers who have come together to create and produce work that cannot be replicated inside a television box or on a movie screen...The work of The Fire Dept combines the rigor and structure of great narrative storytelling with the vitality of formal experimentation to immerse audiences in a total experience that leaves them awake, alive and transformed." The company will devote energy into developing new live theater works as well as interpreting old favorites.

His guest appearance was on Sesame Street as Bob's long-lost brother Minneapolis (parody of Indiana Jones) where Big Bird's friend Snuffleupagus had a missing golden cabbage.

Personal life
Goldblum has been married twice. He was married to Patricia Gaul from 1980 to 1986. He was later married to Geena Davis, with whom he starred in three films (including the comedy Earth Girls Are Easy) from November 1, 1987 to October 1990. He claims to have maintained a good friendship with her in the ensuing years, saying, "she's a wonderful person and a wonderful actress." He was engaged to Laura Dern, with whom he co-starred in Jurassic Park. Goldblum was engaged to Catherine Wreford, a Canadian dancer, as documented in his 2006 mockumentary/documentary Pittsburgh, but is no longer. He has also mentioned, while a guest on Late Night With Conan O'Brien, that he enjoys curling.