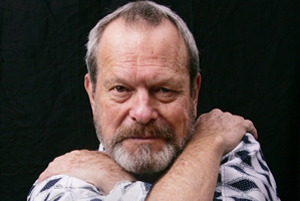 Terrence Vance Gilliam (born November 22, 1940) is an American-born British filmmaker, animator, and member of the Monty Python comedy troupe. Gilliam has the distinction of being the only American-born Python, as the rest of the group are all native Britons.

Early life
Gilliam was born in Medicine Lake, Minnesota. His father was a traveling salesman for Folgers before becoming a carpenter. Gilliam has two siblings: a sister two years younger, and a brother ten years younger.

The family moved to California because of his sister's asthma, and Terry Gilliam enrolled into Birmingham High School. He became class president and senior Prom King, was voted 'Most Likely to Succeed', and got straight A's in school. During high school, he discovered Mad magazine, which was then edited by Harvey Kurtzman; this would later influence his work.

When Gilliam graduated from high school, he attended Occidental College, at first studying physics, then switching to fine arts before finally majoring in political science. Gilliam contributed to the college magazine, Fang, becoming the editor during his junior year and turning it into a tribute to Kurtzman, to whom he later sent copies. While in college Gilliam was a member of Sigma Alpha Epsilon fraternity. After finishing college, Gilliam worked briefly for an advertising agency before Kurtzman offered him a job at Help! magazine.

Terry Gilliam started his career as an animator and strip cartoonist; one of his early photographic strips for Help! featured future Python cast-member John Cleese. Moving to England, he animated features for Do Not Adjust Your Set, which also featured future Pythons Eric Idle, Terry Jones, and Michael Palin. Gilliam was a part of Monty Python from its formation, at first credited as an animator (his name was listed separately after the other five in the closing credits), later as a full member. He was the principal artist-animator of the surreal cartoons which frequently linked the show's sketches together, and defined the group's visual language in other media. He also appeared in several sketches, and played side parts in the films.

Gilliam's animations for Monty Python have a distinctive style. He mixed his own art, characterized by soft gradients and odd, bulbous shapes, with backgrounds and moving cutouts from antique photographs, mostly from the Victorian era. The style, a type of cutout animation, has been mimicked repeatedly throughout the years: the children's television cartoon Angela Anaconda, a series of television commercials for Guinness stout, the "Children's Television Sausage Factory" openings that inspired opening animator Barry Blair of Nickelodeon series You Can't Do That On Television!, John Muto's animation in Forbidden Zone, and the television history series Terry Jones' Medieval Lives.

Gilliam went on to become a motion picture writer and director.

His films are usually highly imaginative fantasies. Most of Gilliam's movies include plotlines that seem to occur partly or completely in the characters' imaginations, raising questions about the definition of identity and sanity. He often shows his opposition to bureaucracy and authoritarian regimes. He also distinguishes "higher" and "lower" layers of society, with a disturbing and ironic style. His movies usually feature a fight or struggle against a great power which may be an emotional situation, a human-made idol, or even the person himself, and the situations do not always end happily. There is often a dark, paranoid atmosphere and unusual characters who formerly were normal members of society. His scripts feature black humour and often end with a dark twist (cf. tragicomedy).

His films have a distinctive look, often recognizable from just a short clip; Roger Ebert has said "his world is always hallucinatory in its richness of detail." There is often a baroqueness about the movies, with, for instance, high-tech computer monitors equipped with low-tech magnifying lenses in Brazil, and in another a red knight covered with flapping bits of cloth. He also is given to incongruous juxtapositions of beauty and ugliness, or antique and modern. Most of his movies are shot almost entirely with extremely wide lenses of 28 mm or less, and extremely deep focus.

Production problems
Gilliam has made a few extremely expensive movies beset with production problems. After the lengthy quarreling with Universal Studios over Brazil, Gilliam's next picture, The Adventures of Baron Munchausen, cost around US$46 million, and then earned only about US$8 million in US ticket sales.

In the mid-1990s, Gilliam and Charles McKeown developed a script for Time Bandits 2; the project never came to be, as several of the original actors had died. He also attempted to direct a version of Charles Dickens A Tale of Two Cities, which collapsed due to disagreements over its budget and choice of lead actor.

In 1999, Gilliam attempted to film The Man Who Killed Don Quixote, budgeted at US$32.1 million, among the highest-budgeted films to use only European financing; but in the first week of shooting, the actor playing Don Quixote (Jean Rochefort) suffered a herniated disc, and a flood severely damaged the set. The film was canceled, resulting in an insurance claim worth US$15 million. (Gilliam's reputation in this regard has been sufficient for the satirical newspaper The Onion to run a news article entitled "Terry Gilliam Barbecue Plagued By Production Delays".) Although the film was canceled, the story behind the whole production was filmed by a second crew hired by Gilliam to document the process. (This was as sort of an insurance for Gilliam, learned from previously canceled productions.) This production story was made into the documentary Lost in La Mancha.

He has attempted twice to adapt Alan Moore's Watchmen comics into a film. Both attempts (in 1996 and 2000, respectively) were also unsuccessful.

Future projects
Gilliam has several projects in various states of development, including an adaptation of Neil Gaiman and Terry Pratchett's comic fantasy novel Good Omens; Gilliam also has in mind for the leads Johnny Depp as Crowley and Robin Williams as Aziraphale. As of summer 2006, this seems likely to be his next project. Gilliam intends to direct The Defective Detective, written by The Fisher King script-writer Richard LeGravanese.

On 23 January 2007, Gilliam announced that he had been working on a new project with writing partner Charles McKeown. One day later, the fansite Dreams reported that the new project was entitled The Imaginarium of Dr. Parnassus.

Gilliam and Harry Potter
J. K. Rowling, the author of the Harry Potter series of books, is a fan of Gilliam's work. Consequently, Gilliam was Rowling's first choice for the director of Harry Potter and the Philosopher's Stone in 2000. Warner Brothers refused to consider Gilliam as director, instead selecting Chris Columbus for the job. Recently, Gilliam stated in relation to this episode, "I was the perfect guy to do Harry Potter. I remember leaving the meeting, getting in my car, and driving for about two hours along Mulholland Drive just so angry. I mean, Chris Columbus' versions are terrible. Just dull. Pedestrian."

Gilliam, though rumoured for a day or so to direct Harry Potter and the Half-Blood Prince, as per IMDb, has stated that he will never direct any Potter film.

Slava's Diabolo
In 2006, Gilliam directed the stage show Slava's Diabolo, created and staged by Russian clown artist Slava Polunin. The show combines Polunin's clown style, characterized by deep non-verbal expression and interaction with the audience, with Gilliam's rich visuals and surrealistic imagery. The show premiered at the Noga hall of the Gesher theater in Jaffa, Israel.

Personal life
Gilliam has been married to make-up and costume designer Maggie Weston (who worked on Flying Circus, many of the Python movies and Gilliam's movies up to Baron Munchausen) since 1973. The two have had three children, Amy, Holly, and Harry, who have also appeared in several of Gillam's films.

Gilliam had a dual American and British citizenship for 38 years, but renounced his American citizenship in 2006. He also maintains a residence in Italy near the Umbria-Tuscany border. He has been instrumental in establishing the annual Umbria Film Festival, held in the nearby hill town of Montone.

He was also the chairman and CEO of his own studio, Terry Gilliam Pictures Co. Ltd.

An asteroid, 9619 Terrygilliam, is named in his honour.
Gilliam famously appeared in a sketch on Trigger Happy TV, where he was interviewed by Dom Joly. While filming, a planted busker set up behind the protagonists. Joly, feigning outrage at the temerity of the street performer, smashed the hapless busker's guitar before chasing him away and shouting 'Do you want some more — well do you? Come on then!' Gilliam was astonished and vaguely terrified, mouthing 'Oh, fuck!' to the cameraman.
Trey Parker and Matt Stone Stone animated Monty Pytho's famous "Dead Parrot Sketch" using characters from their show South Park for the BBC's "Monty Python Night". They then "kidnapped" Gilliam's mother in order to force him to come and work for them and create more animations.