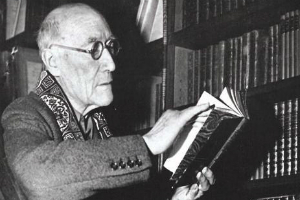 French writer, a novelist, essayist, critic, playwright and leader of French liberal thought who won the Nobel Prize for literature in 1947. One of the founders of the monthly magazine, La Nouvelle Revue Francaise, he was controversial in his time for his frank defense of homosexuality (he was probably bisexual), and for his occasional espousals (and later disavowals) of communism. His major novels are "The Immoralist," 1902, "Lafcadio’s Adventure," 1914 and "The Counterfeiters," 1926. He drew upon his own experience and concerns in a search for new ethics to replace prejudice.

Andre Paul Guillaume Gide was raised in a family dominated by women as his father had died when he was 11. He attended various French schools, and published his first work in 1891, "Les Cahiers d’Andre Walter" ("The Notebooks of Andre Walter"), and a number of other works thereafter at his own expense. When "Fruits of the Earth" appeared in 1897, it was the most extreme example of Gide’s attraction to poetic prose, and was a breakthrough for Gide in its celebration of the senses.

Gide's preoccupation with individual moral responsibilities led him to seek public office. After filling municipal positions in Normandy, he became a special envoy of the colonial ministry, 1925-1926 and wrote two books describing conditions in the French African colonies. These books, released in 1927, were instrumental in bringing about reforms in the French colony law. His work continued in novels, plays, critical studies and poetry.

Between 1933 and 1936, Gide made antifascist speeches and wrote articles, and presided at various leftist meetings. In 1936, however, a disillusioning trip to Soviet Russia changed his outlook.

His mother died on 10/8/1895, and two weeks later, after inheriting a considerable fortune, he married his cousin, Madeleine Rondeaux and soon returned to Algiers. It was said to have been an unconsummated marriage. When Madeleine discovered his predilection for homosexuality, she fled to the estate in Cuverville and Gide began his extensive travels. She died in 1938, unaware that in 1923, Gide had fathered a daughter, Catherine, more or less as a favor to the child’s mother, Elisabeth van Rysselberghe.