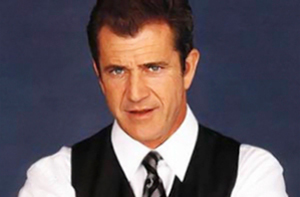 Melvin Columcille Gerard Gibson (born January 3, 1956 (birth time source: British Entertainers, Franck C. Clifford)) is an American-born actor, director, and producer raised primarily in Australia. After establishing himself as a household name with the Mad Max and Lethal Weapon series, Gibson went on to direct and star in the Academy Award-winning Braveheart. Gibson's direction of Braveheart made him the sixth actor-turned-filmmaker to receive an Oscar for Best Director. In 2004, he directed and produced The Passion of the Christ, a blockbuster movie that portrayed the last hours of the life of Jesus. Gibson is an honorary Officer of the Order of Australia.

Early life
Gibson was born in Peekskill, New York, the sixth of eleven children. He is the son of Hutton Gibson and Anne Reilly Gibson, who was born in Columcille Parish, County Longford, Ireland. His paternal grandmother was the Australian opera singer, Eva Mylott. One of Mel's younger brothers, Donal, is also an actor. Gibson's first name comes from a 5th century Irish saint, Mel, founder of the diocese of Ardagh containing most of his mother's native county, while his second name, Columcille is also linked to an Irish saint. Columcille is the name of the parish in County Longford where Anne Reilly was born and raised.

Although Gibson is a native-born United States citizen, Hutton Gibson relocated his family to Sydney, Australia in 1968, after winning a work related injury lawsuit against New York Central.

Film career
Gibson graduated from the National Institute of Dramatic Art in Sydney in 1977. His acting career began in Australia with appearances in television series, including The Sullivans, Cop Shop and Punishment. Gibson's handsome boyish good looks made him a natural for leading male roles in action projects such as the "Mad Max" series of films, Peter Weir's Gallipoli, and the "Lethal Weapon" series of films. Later, Gibson expanded into a variety of acting projects including human dramas such as Hamlet, and comedic roles such as those in Maverick and What Women Want. His greatest artistic and financial success came with films where he expanded beyond acting into directing and producing, such as 1993's The Man Without a Face, 1995's Braveheart, 2004's Passion of the Christ and 2006's Apocalypto. Gibson was considered for roles in Batman, GoldenEye, Amadeus, Gladiator, The Golden Child, X-Men, Robin Hood: Prince of Thieves, Runaway Bride and Primary Colors. Actor Sean Connery once suggested Gibson should play the next James Bond to Connery's M. Gibson turned down the role, reportedly because he feared being typecast.

On July 25, 1997, Gibson was named an honorary Officer of the Order of Australia (AO), in recognition of his "service to the Australian film industry". The award was honorary because substantive awards are made only to Australian citizens. Gibson is the first person awarded People magazine's "Sexiest Man Alive".

Mad Max
Gibson almost did not get the role that made him a star. His agent got him an audition for Mad Max, but the night before, he got into a drunken brawl with three other men at a party, resulting in a swollen nose, a broken jawline, and various other bruises. Mel showed up at the audition the next day looking like a "black and blue pumpkin" (his own words). Mel did not expect to get the role and only went to accompany his friend. However, the casting agent told Mel to come back in two weeks, telling him "we need freaks." When Mel did come back, he was not recognized because his wounds had healed almost completely, and received the part. This incident is listed in Ripley's Believe It or Not!

Gibson made his film debut as the leather-clad post-apocalyptic survivor in George Miller's Mad Max. The film was totally independently financed and had a reported budget of $300,000 AUD — of which $15,000 was paid to Mel Gibson for his performance. The film achieved incredible success, and went on to earn $100 million world wide. It held a record in Guinness Book of Records as the highest profit-to-cost ratio of a motion picture, and only lost the record in 2000 to The Blair Witch Project. The film was awarded four Australian Film Institute Awards in 1979.

When the film was first released in America, all the voices, including that of Mel Gibson's character, were dubbed with U.S. accents at the behest of the distributor, American International Pictures, for fear that audiences would not take warmly to actors speaking entirely with Australian accents.

The Bounty
In 1984, starred as Fletcher Christian in The Bounty. Reportedly, Gibson and Anthony Hopkins, his costar on the film, did not get along during the shoot. At the time, Anthony Hopkins was a teetotaler, and Mel Gibson was struggling with alcoholism. Gibson frequently spent his evenings in local saloons and took to mixing two shots of Scotch with his beer. He dubbed the concoction "Liquid Violence". In one incident, Gibson's face was severely cut up in a bar room brawl and the film's shooting schedule had to be rearranged while he was flown to a hospital in Papeete.

Lethal Weapon
Gibson moved into more mainstream commercial filmmaking with the popular Lethal Weapon series, in which he starred as LAPD Detective Martin Riggs, an emotionally unstable Vietnam veteran with a death wish and a penchant for violence and gunplay. In the films, he was partnered with the elder and more reserved Roger Murtaugh (played by Danny Glover). This series would come to exemplify the action genre's so-called buddy film.

The two actors were trained in two different schools of acting. Gibson is classically trained and Glover is a method actor. Three sequels were produced.

Hamlet
Gibson made the unusual transition from the action to classical genres, playing the melancholy Danish prince in Franco Zeffirelli's Hamlet. Gibson was cast alongside such experienced Shakespearean actors as Ian Holm, Alan Bates, and Paul Scofield. He described working with his fellow cast members as similar to being "thrown into the ring with Mike Tyson".

The film met with critical and marketing success and remains steady in DVD sales. It also marked the transformation of Mel Gibson from action hero to serious actor and filmmaker.

Braveheart
Gibson stated that when the Braveheart script arrived and was recommended by his agents, he rejected it outright because he thought he was too old to play the part. After careful thought, he decided to not only act in the film, but to direct it as well.

He said in interviews that he was attempting to make a film similar to the epics he had loved as a child, such as Stanley Kubrick's Spartacus and The Big Country. The filming began in the Scottish Highlands. After learning that the intended filming locations were among the rainiest spots in Europe, the shooting was moved to the Republic of Ireland, where members of the Irish Army Reserve worked as extras in the battle scenes.

Gibson co-wrote the screenplay with writer Benedict Fitzgerald and financed the film himself, spending an estimated $40-$50 million of his own money. The filming took place on location in Matera, Italy and Cinecittá Studios in Rome. Prior to making the film, Gibson constructed a traditionalist Catholic chapel on his California estate.

Reviews were mixed, with critics ranging from praising the film for its realistic depiction of Jesus' final hours from a Catholic point of view and criticism of violence, manipulation and charges of anti-Semitism.

Asked if his movie would "upset Jews", Gibson responded, "It's not meant to. I think it's meant to just tell the truth. I want to be as truthful as possible." Accusations of anti-Semitism were fueled by news reports that Mel Gibson's father, Hutton Gibson, is a vocal Holocaust denier who has alleged that much of the Holocaust is "fiction".

On his decision to cut the scene in which Caiaphas says "his blood be on us and on our children" soon after Pontius Pilate washes his hands of Jesus, Gibson said:

I wanted it in. My brother said I was wimping out if I didn't include it. But, man, if I included that in there, they'd be coming after me at my house. They'd come to kill me.
The movie grossed US$611,899,420 worldwide and $370,782,930 in the US alone. It became the eighth highest-grossing film in history and the highest-grossing rated R film of all time. The ticket sales were boosted by the film attracting viewers who generally do not attend theaters, including entire church congregations. The film was nominated for an Academy Award for Original Music Score, Best Cinematography, and Best Makeup at the 77th Academy Awards and won the People's Choice Award for Best Drama.

Apocalypto
Gibson's next historical epic, Apocalypto, was released to theaters on December 8, 2006. The film is set in Mesoamerica, during the period immediately before the Spanish conquest. It focuses on the decline of the Maya civilization which reached its zenith around 600 AD. Dialogue is spoken in the Yucatec Maya language. It features a cast of unknown actors from Mexico City, the Yucatán, and some Native Americans from the United States.

While Gibson financed the film himself, Disney released it in specific markets.

The film is set against the turbulent end times of the once great Maya civilization.
The title is a Greek term which means "an unveiling" or "new beginning", but the movie is not religiously themed or connected to the biblical Apocalypse.

Gibson pre-screened Apocalypto to two predominantly Native American audiences in Oklahoma, at the Riverwind Casino in Goldsby, owned by the Chickasaw Nation, and at Cameron University in Lawton.

Gibson is currently considering directing a film taking place in Panama shortly after the era of Apocalypto about the first Europeans to see the Pacific Ocean.