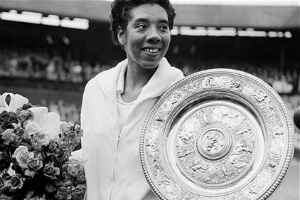 American tennis player and champion of the Wimbledon Women's Singles in 1957 and 1958. In 1950 she became the first black to compete in the Unitd States nationals. In her career, she won 56 tournaments, including five Grand Slam singles titles: the United States nationals and Wimbledon twice and the French Championship in 1956.

Gibson was born in a sharecropper's shack in South Carolina. When she was a few months old, her parents moved to New York City, and she grew up in a rough neighborhood in Harlem. A chronic truant, she dropped out of school in the eighth grade. She was introduced to tennis when a Police Athletic League set up a paddle tennis court right in front of the Gibsons' house. She took up paddle tennis at age 9 and won a city-wide championship at 12.

In 1941, a Harlem bandleader and part-time Police Athletic League supervisor bought her tennis rackets and introduced her to a black tennis club. There she found a coach, Fred Johnson, who taught her important lessons. During her adolescence, she lived "pretty wild" and, often coming home late, would be beaten by her father whom she saw as a strict disciplinarian, not abusive. However, she did leave her home, seeking refuge from her father in a Catholic home for girls and eventually received a welfare grant to get her own apartment.

In 1942, she won her first tournament, the New York State girls' championship, organized by black players. Though she lost in the final of her first American Tennis Association women's championship in 1946, she caught the eye of two black physicians who became her sponsors. Determined to break the color barrrier, they provided housing and support for Gibson.

At age 19, she enrolled at Wilmington Industrial High School, finishing in three years, and graduating 10th in her class. She subsequently earned a college scholarship, receiving her degree from Florida A&M at age 25. In 1947, she won the first of her 10 straight A.T.A. national championships. On August 28, 1950, she became the first black player to compete in the national tennis championship and nearly won.

Though she lost the match, she did gain the attention of the tennis public. She played Wimbledon for the first time in 1951. In autumn 1955, the State Department selected her for a goodwill tennis tour of Asia and the Far East, and in 1956, she won 16 of her 18 tournaments, including the French championship at Roland Garros. In 1956, she won the Wimbledon doubles with Angela Buxton, and won doubles again in 1957 and 1958, each with different partners.

In 1957, she won all her tournaments except the first, the Australian Open, and finally won the coveted Wimbledon championship and the attention of Queen Elizabeth II. When she returned home, she ws given a hero's welcome, complete with ticker-tape parade up Broadway, a banquet at the Waldorf-Astoria, and a celebration on West 143rd Street.

In 1958, needing money, she went on an exhibition tour with the Harlem Globetrotters, playing tennis at halftime. She was inducted into the International Tennis Hall of Fame at Newport, RI. In the 60s, she became the first black player to compete on the women's golf tour, but never won a tournament. She later held various athletic positions within the New Jersey state government and served as the city of East Orange's recreation director.

Married twice, she had no children.