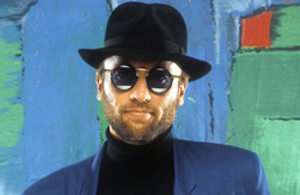 Maurice (pronounced Morris), was a twin brother to Robin Gibb, and was the younger of the twins by thirty-five minutes. He is best known as a member of the singing-songwriting trio the Bee Gees, formed with his brothers Robin and Barry. The trio had their start in Australia; their major success came when they returned to England where they had lived for several years as children.

Gibb grew up with his family in Chorlton-cum-Hardy, Manchester, England. In 1958 he and his family moved to Brisbane, Australia, settling in one of the city's poorest suburbs, Cribb Island, which was subsequently demolished to make way for Brisbane Airport.

Career
Main article: Bee Gees
While in Brisbane, he and brothers Robin and Barry formed the Bee Gees. At first the younger brothers simply sang harmony to Barry, but by 1966 Maurice was important as an instrumentalist and had begun writing songs. The family moved back to England in January 1967 and the Bee Gees signed with Robert Stigwood, which led to their becoming one of the most successful musical groups of the 1960s, 70s and 80s. In a career spanning five decades, the group sold over 180 million records.

Maurice Gibb's role in the group focused on melody and arrangements. He sang harmony and backing vocals, and played a variety of instruments. Very early on in 1965 and 1966 he played lead guitar, but as early as 1966 he was playing other keyboard and string instruments in the studio. Bee Gees records from 1967 to 1972 are dominated by Maurice playing piano and bass guitar, along with mellotron ("Every Christian Lion Hearted Man" and "Kilburn Towers"), rhythm guitar (along with Barry), and other parts. The piano on songs like "Words" and "Lonely Days" is the Maurice Gibb sound. On stage he usually played bass guitar, with an additional musician taking bass when Maurice switched to piano. Maurice was less influential in the disco Bee Gees sound of 1975 to 1979, when he played mostly bass guitar. After that time for the last twenty years of his life he played primarily electronic keyboard instruments on stage and in the studio, but occasional lead guitar (like the acoustic on "This Is Where I Came In", 2001). In the reunited Bee Gees from 1987 onward Maurice was the group's resident expert on all technical phases of recording, and he coordinated musicians and engineers to create much of the group's sound.

As a songwriter Maurice contributed mainly to melody, with his brothers, for the most part, writing the lyrics that they would sing on the finished song. It is difficult to identify his contributions because the songs were so shaped to the singer, but his brothers' continued writing collaboration with him on solo projects shows how much they relied on him. Maurice sang lead on average one song per album. He was sometimes known as "the quiet one" for his less obvious contributions to the group, but privately he was a good teller of stories who immensely enjoyed talking with fans. His reputation as a mild-mannered stabilising influence with two very ambitious brothers continued through his life.

Away from the Bee Gees, Maurice recorded but did not release a solo album in 1970, and in the same year he appeared in a short-lived West End musical, Sing a Rude Song. During the Bee Gees hiatus in the 1980s he worked with both Barry and Robin on their solo projects, and did some instrumental writing and recording including the soundtrack for the film "A Breed Apart". In 1986 he produced and co-wrote an entire album for Swedish singer Carola. Of these and other projects the only disks released under his own name were two singles: "Railroad" in 1970 and "Hold Her in Your Hand" in 1984.

Maurice's last great project was to produce an album's worth of songs written and sung by his daughter Samantha, which finally appeared in 2005 under the name M E G -- Maurice's initials.

Personal life
Gibb was married to the Scottish pop star Lulu from 1969 to 1973; they had no children, and the pressure of their respective commitments led to their divorce.

Together with his second wife Yvonne, Gibb had two children: Adam and Samantha.

Gibb loved the sport of paintball, and had a team which he called the Royal Rat Rangers, a reference to his being named a Commander of the British Empire, and to his time at the Little River AA group, where the members referred to each other as "river rats." He promoted the sport at every opportunity, and opened a paintball equipment shop, "Commander Mo's Paintball Shop," in North Miami Beach, Florida.

Maurice Gibb died unexpectedly at a Miami Beach, Florida, hospital on 12 January 2003, of complications from a twisted bowel. Following his death, his surviving brothers Barry and Robin announced that they would no longer perform as the Bee Gees.

In 2002 Maurice was made a Commander of the British Empire (CBE), along with his brothers, but the awards were not presented until 2004, after Maurice's death; his son Adam accompanied Barry and Robin to Buckingham Palace for the ceremony.