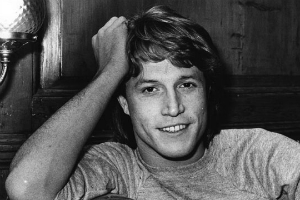 British-American musician and youngest brother of the pop group "The Bee Gees." Under the protection of his older brothers, Barry, Maurice and Robin, he was known as the baby Bee Gee. He skyrocketed to become a teen sensation in the '70s, selling 15 million records worldwide by age 21. He was the only performer ever to have his first three singles reach the top of the charts at No. 1.

Gibb was the son of Hugh, an ex-drummer and band leader and Barbara, a former big-band singer. The family emigrated to Australia when Andy was six months old, then moved back to England in 1967 in response to rising popularity of his brothers' group, "The Bee Gees." The family then took up residence on the island of Ibiza, off the coast of Spain in 1970 where brother Barry gave 12 year old Andy a guitar.

A close family relationship sheltered the guileless, sensitive, delicate boy. With the success of the Bee-Gees, he was picked up at school in a Rolls Royce. Other students resented him and school bored him, compared with the show business life of his brothers. By age 13 Andy left school and was performing at local clubs with occasional accompaniment by his brothers. "Their harmonies, their ballads, all influenced me greatly. I guess you could say I idolized the Bee Gees as a band and loved them as brothers."

His voice was so appealing that in 1975 he was encouraged to go out on his own in Australia. Stardom began in earnest when after one hit, Andy was in great demand within his first year. His self-written single "Words and Music" reached No.5 in Sydney.

In July 1977, the 19 year old Andy married 18 year old receptionist Kim Reeder. While on his honeymoon, he was requested by record producer Robert Stigwood to make demo tapes in Miami, which were subsequently released that same year on his first album "Flowing Rivers." They moved to West Hollywood in 1977 where he gradually became immersed with an addictive involvement with cocaine. Drugs and seeking single solitude in the mountains were first steps to depression and paranoia. (When Kim became pregnant, she flew back to Australia on 7/11/1976.

After giving birth to a daughter, Peta, on 1/25/1978, she divorced Andy three months later after a ten month marriage; she didn't want her daughter surrounded by drugs and alcohol.) In 1980 Kim took Peta to California to see her father, where, after a brief meeting, mother and daughter never saw Andy again.

Andy was nominated for two Grammy Awards, one for Best New Artist of the Year and Best Pop Vocal for the hit single "I Just Want To Be Your Everything." Gibb always doubted his talent, but knew he was lucky. In his first year he made $2 million when his single hit the top of the charts. The following year his income was $1 million. His second album, "Shadow Dancing," went platinum within weeks of release and produced another No. 1 single of the same title. A headline concert tour followed, where Andy was reviewed as one of the top entertainers in America. A third single, "Love Is Thicker Than Water," reached No. 1 before the album was even released.

The hit singles ended in 1981. Andy began a high-profile relationship with actress Victoria Principal that same year, who was 12 years his senior. Unable to tolerate his addiction, Principal ended the relationship 13 months later, telling him to choose between her and his notorious $1,000 a day cocaine habit. Falling in love with Principal proved emotionally devastating when they broke up. This was his last serious relationship. Gibb abruptly nose-dived into despair, drugs and debt.

In 1981 he was signed to co-host the syndicated TV show "Solid Gold" with Marilyn McCoo. Missing too many shows, he was consequently fired. Later in 1981 he was given a starring role opposite Pam Dawber in the Los Angeles production of "The Pirates of Penzance." He wished every night could be opening night as he loved the excitement. Gibb's 1982 Broadway debut in "Joseph and the Amazing Technicolor Dreamcoat" was short lived as he missed 12 performances in six weeks and was fired. He filed bankruptcy papers 9/9/1987, owing $1.5 million.

After losing 30 pounds because of his coke habit, Andy entered a rehab clinic in 1985 to kick his addiction, with not much success. "I was very young when I hit top," he said, " then I hit bottom." After years of family persuasion, he entered the Betty Ford Clinic in California the following year, getting clean and dry with this attempt. During the same period, he was being treated by a Beverly Hills cardiologist for heart inflammation.

Singularly inept with finances, Andy did not even know how to use a credit card. While statements showed he earned $7,775 in 1986, he was in fact over $1 million in debt and was forced into bankruptcy, filing on 9/09/1987. A second chance came in early 1988 when he signed to make another album.

He moved from Miami to his brother's estate in Oxford, England to begin work on it, where he entered the hospital on the morning of 3/07/1988 complaining of stomach pains. After speaking with his doctor three days later in his hospital bed, at 8:30 AM, he slipped into unconsciousness and died moments later. The autopsy revealed death of inflammation of the heart due to a virus.

One cardiologist later reported 'long term use of cocaine would cause enlargement of the heart." However the hospital in a carefully worded statement said death was due to inflammation of the heart of the sort caused by a virus, not due to drink or drugs.