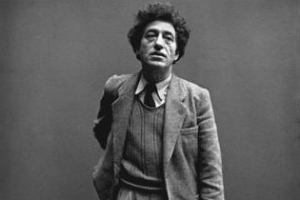 Alberto Giacometti (10 October 1901 – 11 January 1966) was a Swiss sculptor, painter, draughtsman, and printmaker. Alberto Giacometti was born in the canton Graubünden's southerly alpine valley Val Bregaglia and came from an artistic background; his father, Giovanni, was a well-known post-Impressionist painter. Alberto was the eldest of four children and was interested in art from an early age.

Giacometti was born in Borgonovo, now part of the Swiss municipality of Stampa, near the Italian border. He was a descendant of Protestant refugees escaping the Italian Inquisition. His father, Giovanni Giacometti, was a painter. Alberto attended the School of Fine Arts in Geneva.

In 1922 he moved to Paris to study under the sculptor Antoine Bourdelle, an associate of Auguste Rodin. It was there that Giacometti experimented with cubism and surrealism and came to be regarded as one of the leading surrealist sculptors. Among his associates were Joan Miró, Max Ernst, Pablo Picasso, Bror Hjorth and Balthus.

Between 1936 and 1940, Giacometti concentrated his sculpting on the human head, focusing on the sitter's gaze. He preferred models he was close to, his sister and the artist Isabel Rawsthorne (then known as Isabel Delmer). This was followed by a unique artistic phase in which his statues of Isabel became stretched out; her limbs elongated. Obsessed with creating his sculptures exactly as he envisaged through his unique view of reality, he often carved until they were as thin as nails and reduced to the size of a pack of cigarettes, much to his consternation. A friend of his once said that if Giacometti decided to sculpt you, "he would make your head look like the blade of a knife." After his marriage to Annette Arm in 1946 his tiny sculptures became larger, but the larger they grew, the thinner they became. Giacometti said that the final result represented the sensation he felt when he looked at a woman.

His paintings underwent a parallel procedure. The figures appear isolated, are severely attenuated, and are the result of continuous reworking. Subjects were frequently revisited: one of his favorite models was his younger brother Diego Giacometti. A third brother, Bruno Giacometti, was a noted architect.

In 1958 Giacometti was asked to create a monumental sculpture for the Chase Manhattan Bank building in New York, which was beginning construction. Although he had for many years "harbored an ambition to create work for a public square", he "had never set foot in New York, and knew nothing about life in a rapidly evolving metropolis. Nor had he ever laid eyes on an actual skyscraper", according to his biographer, James Lord. Giacometti's work on the project resulted in the four figures of standing women—his largest sculptures—entitled Grande femme debout I through IV (1960). The commission was never completed, however, because Giacometti was unsatisfied by the relationship between the sculpture and the site, and abandoned the project.

In 1962, Giacometti was awarded the grand prize for sculpture at the Venice Biennale, and the award brought with it worldwide fame. Even when he had achieved popularity and his work was in demand, he still reworked models, often destroying them or setting them aside to be returned to years later. The prints produced by Giacometti are often overlooked but the catalogue raisonné, Giacometti - The Complete Graphics and 15 Drawings by Herbert Lust (Tudor 1970), comments on their impact and gives details of the number of copies of each print. Some of his most important images were in editions of only 30 and many were described as rare in 1970.

In his later years Giacometti's works were shown in a number of large exhibitions throughout Europe. Riding a wave of international popularity, and despite his declining health, he travelled to the United States in 1965 for an exhibition of his works at the Museum of Modern Art in New York. As his last work he prepared the text for the book Paris sans fin, a sequence of 150 lithographs containing memories of all the places where he had lived.

Giacometti died in 1966 of heart disease (pericarditis) and chronic bronchitis at the Kantonsspital in Chur, Switzerland. His body was returned to his birthplace in Borgonovo, where he was interred close to his parents. In May 2007 the executor of his widow's estate, French foreign minister Roland Dumas, was convicted of illegally selling Giacometti's works to a top auctioneer. The auctioneer, Jacques Tajan, was also convicted. Both were ordered to pay €850,000 to the Alberto and Annette Giacometti Foundation.

Giacometti was a key player in the Surrealist art movement, but his work resists easy categorization. Some describe it as formalist, others argue it is expressionist or otherwise having to do with what Deleuze calls 'blocs of sensation' (as in Deleuze's analysis of Francis Bacon). Even after his excommunication from the Surrealist group, while the intention of his sculpting was usually imitation, the end products were an expression of his emotional response to the subject. He attempted to create renditions of his models the way he saw them, and the way he thought they ought to be seen. He once said that he was sculpting not the human figure but "the shadow that is cast."

Scholar William Barrett in Irrational Man: A Study in Existential Philosophy (1962), argues that the attenuated forms of Giacometti's figures reflect the view of 20th century modernism and existentialism that modern life is increasingly empty and devoid of meaning. "All the sculptures of today, like those of the past, will end one day in pieces... So it is important to fashion ones work carefully in its smallest recess and charge every particle of matter with life."

A new exhibition in Paris, since September 2011, shows how Giacometti strongly drew his inspiration for his work from Etruscan art.