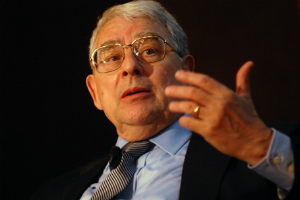 Riccardo Giacconi (born October 6, 1931) is an Italian - American Nobel Prize-winning astrophysicist who laid the foundations of X-ray astronomy. He is currently a professor at the Johns Hopkins University.

Born in Genoa, Italy, Giacconi received his Laurea from the University of Milan before moving to the US to pursue a career in astrophysics research. He became an American citizen.

Since cosmic X-ray radiation is absorbed by the Earth's atmosphere, space-based telescopes are needed for X-ray astronomy. Applying himself to this problem, Giacconi worked on the instrumentation for X-ray astronomy; from rocket-borne detectors in the late 1950s and early 1960s, to Uhuru, the first orbiting X-ray astronomy satellite, in the 1970s. Giacconi's pioneering research continued in 1978 with the Einstein Observatory, the first fully imaging X-ray telescope put into space, and later with the Chandra X-ray Observatory, which was launched in 1999 and is still in operation. Giacconi also applied his expertise to other fields of astronomy, becoming the first director of the Space Telescope Science Institute, the science operations center for the Hubble Space Telescope.

Giacconi was awarded a share of the Nobel Prize in Physics in 2002 "for pioneering contributions to astrophysics, which have led to the discovery of cosmic X-ray sources". The other shares of the Prize in that year were awarded to Masatoshi Koshiba and Raymond Davis, Jr..

Giacconi has held the positions of professor of physics and astronomy (1982–1997) and research professor (since 1998) at Johns Hopkins University, and is now University Professor. During that time he also held the position of Director General of the European Southern Observatory (ESO) (1993–1999). He is currently principal investigator for the Chandra Deep Field-South project with NASA's Chandra X-ray Observatory.