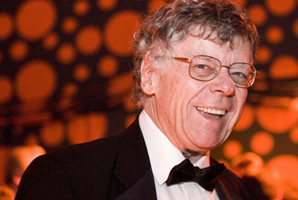 Gordon Peter Getty was born on December 20, 1934. He is the fourth child of oil tycoon J. Paul Getty.

His mother, Ann Rork, was his father's fourth wife. When his father died in 1976, Gordon assumed control of Getty's US$2 billion trust. According to the Forbes 400, as of September 2011 his net worth is $2 billion, making him number 212 on the list of the richest Americans.

Getty was raised in San Francisco, California, attended St. Ignatius College Preparatory, and earned a B.A. in music from the San Francisco Conservatory of Music. He married Ann Gilbert in Las Vegas, Nevada, on Christmas Day, 1964. The wedding was witnessed by William Newsom, Gordon's longtime friend, and father of Gavin Newsom.

He joined the oil business to please his father; however, he eventually sold the family's Getty Oil to Texaco in 1986 for US$10 billion. In 1983, Forbes magazine ranked him the richest person in America with a net worth little over $2 billion.

His current net worth is cited as US$2 billion, making him the 212th richest person in the United States. Getty helped finance Gavin Newsom's PlumpJack Group businesses, including five restaurants, a Napa Valley winery, a Squaw Valley hotel and resort, and two retail clothing stores. Of Newsom’s 11 enterprises, Gordon Getty was the lead investor in 10.

Getty is one of the nation's leading venture capitalists and philanthropists. In 2002, he donated US$3 million to the Ann and Gordon Getty Foundation, a charitable trust. Though a Republican, he is a major fundraiser for local and national Democratic Party candidates, and has contributed to the campaigns of Nancy Pelosi, Willie Brown, Gavin Newsom, and John Kerry.

Among a number of professions, Getty is a classical music composer, whose compositions include the opera Plump Jack, Joan and the Bells, and a collection of choral works. Aspiring to become an opera singer, Getty studied in the mid-1970s with Louise Caselotti, a mezzo soprano who had been Maria Callas' voice teacher (1946-47). He and his wife have supported the fine arts, especially underwriting productions of the San Francisco Opera and the Russian National Orchestra.

In 2002, Getty founded ReFlow, a company which temporarily purchases shares in mutual funds to save funds taxes and commissions.

Gordon Getty has admitted to a 14-year-long romantic relationship with a Los Angeles woman, Cynthia Beck. He has also admitted that he fathered three illegitimate children by her. In 1999, Cynthia Beck sued for those children to be part of Getty's inheritance.