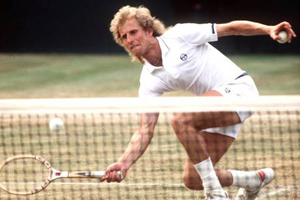 Vytautas Kevin Gerulaitis (July 26, 1954 – September 18, 1994) was a professional tennis player from the United States. He is best remembered for winning the men's singles title at the Australian Open in 1977.

Gerulaitis was born in 1954 in Brooklyn, NY to Lithuanian immigrant parents, and grew up in Howard Beach, Queens. He attended academic and athletic powerhouse Archbishop Molloy High School in Queens, graduating in 1971. He attended Columbia College of Columbia University for one year before dropping out to pursue tennis full time.

In 1977, Gerulaitis won the most significant title of his career at the Australian Open, when he defeated John Lloyd in the men's singles final in five sets.

In 1979, Gerulaitis lost in men's singles finals at the US Open to fellow New Yorker John McEnroe in straight sets.

Gerulaitis reached his third Grand Slam singles final in 1980, when he lost in the final of the French Open to Björn Borg in straight sets.

Gerulaitis was a member of the United States team which won the Davis Cup in 1979. In the final, he won two singles rubbers as the US beat Italy 5–0.

Gerulaitis was known for his exceptionally fast hands at the net and his ability to cover the court with mercurial speed. With his dash of long blond hair he was a precursor, in style at least, to Andre Agassi. Gerulaitis is considered one of the great "might-have beens" of tennis. Some believe that by indulging in a close and perhaps servile friendship with Björn Borg, Gerulaitis may have stifled the aggressive instincts needed to bring a player to the top rank. Gerulaitis had a career head-to-head record against Borg of 0 wins to 16 losses. He is remembered as one of the most pleasing players to watch on court, and a gentleman off court.

In 1985, Gerulaitis teamed-up with Bobby Riggs to launch a challenge to female players after the famous Battle of the Sexes. However, the stunt was short-lived when Gerulaitis and Riggs lost a doubles match against Martina Navratilova and Pam Shriver.

During his career, Gerulaitis won 24 top-level singles titles and 8 doubles titles. His career-high singles ranking was World No. 3 in 1978. He retired from the professional tour in 1986.

Gerulaitis died in a tragic accident on September 18, 1994, at age 40. While visiting a friend's home in Southampton, Long Island, a malfunction in the heating system caused odorless, poisonous carbon monoxide gas to seep into the guesthouse where Gerulaitis was sleeping, causing his death. Gerulaitis is interred in Saint Charles Cemetery in Farmingdale, Long Island, New York.

In 1991 the English rock band Half Man Half Biscuit released a song entitled Outbreak of Vitas Gerulaitis.

Quote
"Nobody beats Vitas Gerulaitis 17 times in a row"