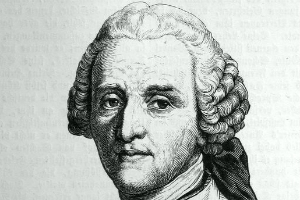 Christian Fürchtegott Gellert (July 4, 1715 – December 13, 1769) was a German poet, one of the forerunners of the golden age of German literature that was ushered in by Lessing.

He was born at Hainichen in the Saxon Erzgebirge foreland. After attending the famous school of St. Afra in Meissen, he entered Leipzig University in 1734 as a student of theology, and on completing his studies in 1739 was a private tutor for two years. Returning to Leipzig in 1741, he contributed to the Bremer Beiträge, a periodical founded by former disciples of Johann Christoph Gottsched, who had revolted from the pedantry of his school. Owing to shyness and weak health Gellert gave up all idea of entering the ministry, and, establishing himself in 1745 as Privatdozent in philosophy at the university of Leipzig, lectured on poetry, rhetoric and literary style with much success. In 1751 he was appointed extraordinary professor of philosophy, a post which he held until his death at Leipzig.

The esteem and veneration in which Gellert was held by the students, and indeed by persons in all classes of society, was unbounded, and yet due perhaps less to his unrivalled popularity as a lecturer and writer than to his personal character. He was the noblest and most amiable of men, generous, tender-hearted and of unaffected piety and humility. He wrote in order to raise the religious and moral character of the people, and to this end employed language which, though at times prolix, was always correct and clear. He thus became one of the most popular German authors, and some of his poems enjoyed a celebrity out of proportion to their literary value. This is more particularly true of his Fabeln und Erzählungen (1746-1748) and of his Geistliche Oden und Lieder (1758).

Not a little of Gellert's fame is due to the time when he lived and wrote. The German literature of the period was dominated by Gottsched's school. A band of high-spirited youths, of whom Gellert was one, resolved to free themselves from what were seen as the conventional trammels of such pedants, and began a revolution which was finally consummated by Schiller and Goethe.

The fables, for which Gellert took La Fontaine as his model, are simple and didactic. The "spiritual songs", though in force and dignity they cannot compare with the older church hymns, were received by Catholics and Protestants with equal favour. Some of them were set to music by Beethoven. The best known is the hymn entitled “Die Ehre Gottes aus der Natur.” Gellert wrote a few sentimental comedies: Die Betschwester (The Praying Sister, 1745), Die kranke Frau (The Sick Woman, 1747), Das Los in der Lotterie (1748), and Die zärtlichen Schwestern (The Affectionate Sisters, 1747), the last of which was much admired. His novel Leben der schwedischen Gräfin von G. (1746), a weak imitation of Richardson's Pamela, is remarkable as being the first German attempt at a psychological novel. Gellert's Briefe ("Letters") were regarded at the time as models of good style.