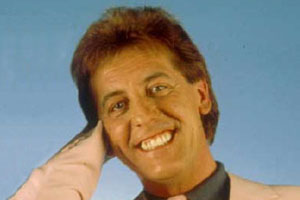 Dustin Gee (21 June 1942 - 1st January 1986). was an English impressionist and comedian most famous for his double act with fellow comic, Les Dennis.

Born Gerald Harrison in York, Gee lived in Manchester, where he studied at art college. He later took a job as an artist - working mainly with stained glass and for a while worked on the famous stained glass windows at York Minster. He played in a rock band in the evenings.

After 20 years in show business, he got his television break on Who Do You Do?, an ITV showcase for impressionists, where they impersonated a host of stars, including Robert Mitchum and Mick Jagger. He went on to appear on Russ Abbot's Madhouse, which debuted in 1980.

Dustin also appeared on ITV's talent show, Success, alongside a sixteen-year-old Lisa Stansfield making her TV debut. He became a huge cabaret star in the UK selling out nightclubs across the land by word of mouth alone.

His take on John Cleese as eccentric hotel owner Basil Fawlty was acclaimed by the man himself as the "best he'd seen".

When he perfected his brand of Larry Grayson (comedy star of the 1970s/1980s), he was to be joined by him on stage and a friendship grew, so good was the 'impression'.

However, he made his biggest impact on Russ Abbott's Madhouse from 1980 onwards. This was the show that included his most famous impression, as Coronation Street's Vera Duckworth in two-handers with Mavis Riley (played by Les Dennis).

Les and Dustin were also the act that had to follow Tommy Cooper, when he collapsed and died onstage on ITV's Live From Her Majesty's in April 1984. In the summer of 1985 Dustin had a heart attack while on stage on the opening night of a six month run at the North Pier in Blackpool. He returned one month later, on his birthday, to complete the run.

On New Year's Eve, 1985, he had a second heart attack whilst working in pantomime with Les Dennis in Southport, Merseyside. Basil Soper, the show's company manager, revived him and Roger Edwards (his PA) accompanied him to Southport General Hospital where he died the next day at 12.30pm, after eating ice cream, surrounded by his family.

It was later revealed that he had had a heart condition all his life, and had been born with an enlarged heart.