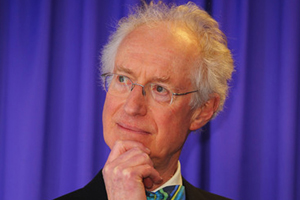 Bamber Gascoigne, FRSL (born 24 January 1935) is a British television presenter and author, best known for being the original quizmaster on University Challenge.

Gascoigne was born in London and won scholarships to both Eton College and Magdalene College, Cambridge (1955), where he read English literature. While at Magdalene, he wrote a musical, Share My Lettuce, which was produced in London in 1957 by Michael Codron, and performed by Maggie Smith and Kenneth Williams (music by Patrick Gowers and Keith Statham).

He then spent a year as a Commonwealth Fund scholar at Yale University (1958–59). After National Service in the Grenadier Guards he became a theatre critic. He is a Fellow of the Royal Society of Literature (elected 1976). He has served as a trustee of the National Gallery, a trustee of the Tate Gallery, a member of the council of the National Trust, and as a member of the board of directors of the Royal Opera House, Covent Garden. His uncle is Sir Julian Gascoigne who was in charge of the Household Division during the coronation of Queen Elizabeth II.

He came to fame as the first presenter of the popular television quiz show University Challenge, first airing in 1962, based on the US series College Bowl. He held the position for 25 years, stepping down in 1987. Although he has written several books, mostly works of history, and presented other television programmes, his name is permanently connected with University Challenge for many viewers of the show.

His questioning manner was firm yet polite. Phrases he often used which became catchphrases include: "Your starter for ten", "fingers on the buzzers" and "I'll have to hurry you".

Gascoigne is the author of Murgatroyd's Empire, a 1972 satirical novel concerning an entrepreneur who finds an island of pygmies, and trades them arms for treasure, recreating the development of European medieval weaponry and armour.

In 1977, Gascoigne wrote and presented The Christians, a thirteen-hour television documentary series on the history of Christianity, produced by Granada Television and broadcast on ITV. He wrote a companion book, under the same title, with photography by his wife, Christina Gascoigne, published by Jonathan Cape.

He wrote Quest for the Golden Hare, a 1983 account of the internationally publicized treasure hunt associated with the publication in 1979 of Kit Williams' book, Masquerade. On 8 August 1979, Gascoigne was witness to the burial by Williams of a unique jeweled, solid gold hare pendant in an earthenware jar "somewhere in Britain". The book documents the search and a scandal associated with finding it.

In 1987, Gascoigne presented a documentary series of six 30 minute programmes on Victorian history, Victorian Values, which looked at how Victorian society put in place the infrastructure of the modern welfare state, also produced by Granada Television.

He was the writer and presenter for the TV series The Great Moghuls, a study of the Mughal Empire of India. The series was also accompanied by a book of the same name, again with photographs by his wife, and has been reprinted numerous times.