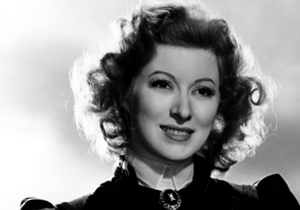 Eileen Evelyn Greer Garson, (London, September 29, 1904 - April 6, 1996) was an English-American actress who was very popular during the years of the Second World War. As one of MGM's major stars of the 1940s, Garson received seven Academy Award nominations, winning the Best Actress award for Mrs. Miniver (1942). She was often cast as the leading lady opposite Walter Pidgeon.

Early life
Known in childhood as "Eggy", Greer Garson was born in Manor Park, Essex (now Greater London), England in 1904. She was the only child of George Garson (1865-1906), a clerk born in London but with Scottish lineage, and his Irish wife, Nancy ("Nina") Sophia Greer (d. 1958). Her maternal grandfather was David Greer, a RIC sergeant in Castlewellan Co Down Northern Ireland in the 1880s and who later became a land steward to the Annesleys' wealthy landlords, who built the town of Castlewellan. He lived in a large detached house built on the lower part of what was known as Pig Street or known locally as the Back Way near Shilliday’s builder’s yard. The house was called ‘Claremount’ and today the street is named Claremount Avenue. It was often reported that Ms. Garson was born in this house. She was, in fact born in London, but spent many of her childhood days in Castlewellan.

She was educated at the University of London, where she earned degrees in French and 18th-century literature. She had intended on becoming a teacher, but instead began working with an advertising agency, and appeared in local theatrical productions.

Career
She appeared on television during its earliest years, in the 1930s, most notably in a thirty-minute production of an excerpt of Twelfth Night in May 1937, alongside Peggy Ashcroft. This is the first known instance of a Shakespeare play performed on television.

Louis B. Mayer discovered Garson while he was in London looking for new talent. Garson was signed to a contract with MGM in late 1937, but did not begin work on her first film, Goodbye, Mr. Chips, until late 1938. She received her first Oscar nomination for the role, but lost to Vivien Leigh for Gone with the Wind. She received critical acclaim the next year for her role as Elizabeth Bennet in the 1940 film, Pride and Prejudice.

Garson starred opposite Joan Crawford in When Ladies Meet in 1941 and that same year, became a major box office star with the sentimental Technicolor drama Blossoms in the Dust which brought her the first of five consecutive Best Actress Oscar nominations, tying Bette Davis' 1938-1942 record, a record that still stands. Garson won the Academy Award for Best Actress in 1942 for her role as a strong British wife and mother in the middle of World War II in Mrs. Miniver. (Guinness Book of World Records credits her with the longest Oscar acceptance speech, at five minutes and 30 seconds, after which the Academy Awards instituted a time limit.) She was also nominated for Madame Curie (1943), Mrs. Parkington (1944), and The Valley of Decision (1945).

Garson was a popular dramatic actress for several years when she was teamed with Clark Gable in his first film since returning from war service in 1945, Adventure. The film was advertised with the catch-phrase "Gable's back and Garson's got him!" Gable had argued for "He put the Arson in Garson", she countered "She Put the Able in Gable!", thereafter the safer catchphrase was selected. Garson's popularity dropped somewhat in the late 1940s, but she remained a popular film star until the mid 1950s. In 1951, she became a naturalized citizen of the United States. She made only a few films after her MGM contract expired in 1954. In 1958, she received a warm reception on Broadway in Auntie Mame, replacing Rosalind Russell who had gone to Hollywood to make the film version. In 1960, Garson received her seventh and final Oscar nomination for Sunrise at Campobello, in which she played Eleanor Roosevelt, this time losing to Elizabeth Taylor for BUtterfield 8.

Garson's last film, in 1967, was The Happiest Millionaire, although she made infrequent television appearances. In 1968, she narrated the children's television special The Little Drummer Boy which went on to become a classic children's Christmas television programs which was broadcast annually for many years.

Personal life
Garson was married three times. Her first marriage, on September 28, 1933, was to Edward Alec Abbot Snelson (1904-1992), later Sir Edward, a British civil servant who became a noted judge and expert in Indian and Pakistani affairs. The actual marriage reportedly lasted only a few weeks, but was not formally dissolved until 1943.

Her second husband, whom she married in 1943, was Richard Ney (1915-2004), the younger actor who played her son in Mrs. Miniver. They divorced in 1947, with Garson claiming that Ney had called her a "has-been" and belittled her age. Ney eventually became a respected stock-market analyst and financial consultant.

That same year, she married a millionaire Texas oilman and horse breeder, E. E. "Buddy" Fogelson (1900-1987), and in 1967, the couple retired to their "Forked Lightning Ranch" in New Mexico. In 1971 they purchased the U.S. Hall of Fame champion Thoroughbred Ack Ack from the estate of Harry F. Guggenheim and were highly successful as breeders. They also maintained a home in Dallas, Texas where Garson funded the Greer Garson Theater facility at Southern Methodist University.

Garson donated millions for the construction of the Greer Garson Theater at the College of Santa Fe on three conditions: 1) that the stage be circular, 2) that the premiere production be William Shakespeare's A Midsummer Night's Dream, and 3) that it have large ladies' rooms.

Death
Greer Garson died from heart failure in Dallas on April 6, 1996, at the age of 91. She is interred there in the Sparkman-Hillcrest Memorial Park Cemetery.