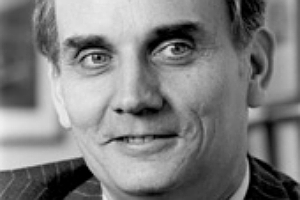 Edwin Jacob "Jake" Garn (born October 12, 1932) is an American politician, a member of the Republican Party, and served as a U.S. Senator representing Utah from 1974 to 1993. Garn became the first sitting member of the United States Congress to fly in space when he flew aboard the Space Shuttle Discovery as a Payload Specialist during NASA mission STS-51-D (April 12–19, 1985).

Born in Richfield, Utah, Garn earned a Bachelor of Science degree in business and finance from the University of Utah in 1955, where he became a member of the Sigma Chi fraternity. He also attended East High School, Clayton Middle School, and Uintah Elementary School.

Senator Garn is a former insurance executive. He served in the United States Navy as a pilot. He also served as a pilot of the 151st Air Refueling Group of the Utah Air National Guard. As a pilot, he flew the KC-97L Stratotanker and a KC-135A Stratotanker. He retired as a Colonel in April 1979. He was promoted to Brigadier General after his space shuttle mission. He has flown more than 10,000 hours in military and private civilian aircraft.

Garn was first elected to the Senate in 1974, succeeding retiring Republican Wallace Bennett. Garn was re-elected to a second term in November 1980, receiving 74 percent of the vote, the largest victory in a statewide race in Utah history.

Garn was chairman of the Senate Banking, Housing, and Urban Affairs Committee and served on three subcommittees: Housing and Urban Affairs, Financial Institutions, and International Finance and Monetary Policy. He also was a member of the Senate Appropriations Committee and served as Chairman of the HUD-Independent Agencies Subcommittee. He served on four other Appropriations subcommittees: Energy and Water Resources, Defense, Military Construction, and Interior. Garn served as a member of the Republican leadership from 1979 to 1984 as Secretary of the Republican Conference.

Garn retired from the Senate in 1992.

As Chairman of the Senate Banking Committee, Garn was co-author of the Garn–St. Germain Depository Institutions Act of 1982, the law that partially deregulated the savings and loan industry and attempted to forestall the looming Savings and Loan crisis.

Garn asked to fly on the Space Shuttle because he was head of the Senate appropriations subcommittee that dealt with NASA, and had extensive aviation experience. He had previously flown a B-2 Spirit prototype and driven a new Army tank. STS-51-D was launched from and returned to land at the Kennedy Space Center, Florida. Its primary objective was to deploy two communications satellites, and to perform electrophoresis and echocardiograph operations in space in addition to a number of other experiments. As a payload specialist, Garn's role on the mission was as a congressional observer and as a subject for medical experiments on space motion sickness. At the conclusion of the mission, Garn had traveled over 2.5 million miles in 108 Earth orbits, logging over 167 hours in space.

he worked out extraordinarily well, and quite frankly, I think the U.S. space program, NASA, has benefited a lot from both his experience and his firsthand relation of NASA and the program back on Capitol Hill. As a firsthand participant in the program, he brought tremendous credibility back to Capitol Hill, and that’s helped a lot. He’s always been a friend of the agency and its programs.

The Jake Garn Mission Simulator and Training Facility, NASA's prime training facility for astronauts in the Shuttle and Space Station programs, is named for him.

Upon his return, he co-authored a novel entitled Night Launch. The book centers around terrorists taking control of the Space Shuttle Discovery during the first NASA–USSR space shuttle flight. It was published in 1989.

Garn married Hazel Rhae Thompson in 1957. Together, they had four children: Jacob, Susan, Ellen, and Jeffrey. Hazel died in 1976. In 1977, Garn married Kathleen Brewerton, who had a son, Brook, from a previous marriage. Jake and Kathleen had two children together, Matthew and Jennifer .