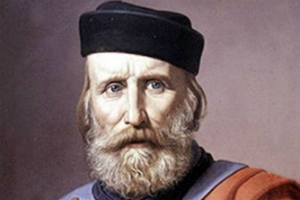 Italian military leader, born in France, who was instrumental in winning the freedom of Italy.

The son of a poor fisherman, he had little education and worked as a sailor for years. He was condemned to death in 1834 for the schemes of Mazzini but escaped and went to South America. While there he became a soldier and a leader, and married his first wife.

In 1848 he returned to Italy to fight against the Austrians, supporting Mazzini's republic. He entered a disastrous period when his battles were lost and his wife died. He fled to the U.S.

For several years Garibaldi commanded a merchant vessel. He returned to Italy in military and political combat, spending time in prison when he was overcome.

In January 1875, he took a seat in the Italian Parliament. Garibaldi spent his latter life living quietly on Caprera, his own island. He married his second wife in 1860, then a third wife. He wrote several mediocre novels and an autobiography in 1887.