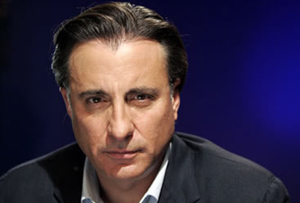 Andy García (born April 12, 1956) is an Academy Award-nominated Cuban-born American actor. He became known in the 1990s, having appeared in several successful Hollywood films, including The Godfather: Part III, When a Man Loves a Woman, and Ocean's Eleven.

Early life
Garcia was born Andres Arturo Garcia y Menéndez in Havana, Cuba. His mother, Amelie Menéndez, was an English teacher, and his father, Rene Garcia Nuñez, was an attorney in Cuba and later a businessman in the United States.

He has an older brother, Rene, and was born with a conjoined twin brother who was surgically removed. When Garcia was five years old, the failure of the Bay of Pigs Invasion forced the family to move to Miami, Florida, where they performed various types of work in order to survive. Over a period of several years, however, they built up a million-dollar perfume company.

García was raised as a Catholic and attended Miami Beach Senior High School, where he played on the basketball team. During his last year in high school, however, he became ill with hepatitis, which convinced him to pursue a career in acting.

Career
Garcia began acting at Florida International University, but soon went to Hollywood. He started to perform in very short roles, working part-time as waiter with his good friend Christian Tellez and in a warehouse. His chance arose when he was offered a role as a gang member in the first episode of the popular TV series Hill Street Blues. Director Brian de Palma liked his performance in the 1986 movie 8 Million Ways to Die and engaged him the following year for The Untouchables, which made Garcia a popular Hollywood actor.

In 1989, Francis Ford Coppola was casting The Godfather Part III. The character Vincent Corleone, the illegitimate son of Sonny Corleone, was an exceptional part which many actors wanted. Garcia was not the only one of the few actors capable of carrying the part, but he also bore a resemblance to Robert De Niro, who played the role of young Vito Corleone, Vincent's grandfather, in The Godfather Part II.

The role thus went to Garcia, who earned an Academy Award nomination as Best Supporting Actor for his performance and became an internationally acclaimed star.

In the following years, Garcia has performed in a wide variety of films. He has appeared also in several TV films. While not in the same vein of movie stars dominating the box office, Garcia has remained equally strong in both leading and supporting roles. One of his more well-known films was the 2001 remake of Ocean's Eleven, in which he played Terry Benedict, the ruthless Las Vegas mogul who just happens to be seeing the estranged wife (Julia Roberts) of George Clooney's character. Garcia reprised the role in the 2004 sequel, although many noted that the part was significantly smaller than the one he played in the first film.

He has finished and released The Lost City which he co-wrote, directs, and stars in, alongside Dustin Hoffman and Bill Murray. Upon its release, "The Lost City" sparked controversy in Latin America due to its negative portrayal of the Cuban Revolution, and Che Guevara in particular. Garcia is a fervent critic of the Cuban government. He was also, along with Gloria Estefan, a strong advocate of Elian Gonzalez staying in the United States rather than returning to Cuba in early 2000.

In 1982, he married María Victoria Lorido. He is the father of three daughters and one son. The Garcia family lives in Los Angeles and Miami. They are practicing Catholics.

His good friend Christian Tellez said, "Andy is a great friend and there's nothing he wouldn't do for family and friends."