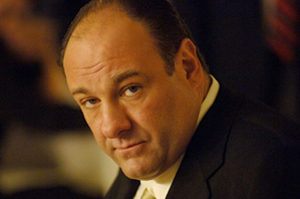 He is best known for his highly acclaimed role as Tony Soprano in the hit HBO TV series The Sopranos, about an Italian-American crime boss struggling to reconcile his family life with his underworld dealings. Gandolfini's other notable roles include a pornographer Eddie Poole in 8mm, woman-beating mob enforcer Virgil in the Quentin Tarantino-written thriller True Romance, a gay hitman in The Mexican, enforcer/stuntman Bear in Get Shorty, and a sadistic military prison commander in The Last Castle. He also played James Goss in Yemar on the Disney Channel.

Early life
Gandolfini was born in Westwood, New Jersey to Joan, a school lunch lady, and James Gandolfini, Sr., a building maintenance chief at a Paramus Catholic High School. His parents, Italian immigrants, spent part of their childhoods in Italy and often spoke Italian. Gandolfini grew up in Park Ridge, New Jersey and graduated from Park Ridge High School in 1979, where he played basketball and acted in school plays.

He holds a bachelor of arts degree in communications from Rutgers University, where he worked as a bouncer at an on-campus pub. Gandolfini also worked as a bartender and club manager before embarking on an acting career. Gandolfini was introduced to acting as a young man living in New York City when he accompanied a friend to an acting class.

Acting career
After acting on Broadway, Gandolfini established a film career. One of his more well-known film roles is that of Virgil, a brutal woman-beating mob enforcer, in the 1993 romantic thriller True Romance. In 1994 film Terminal Velocity, Gandolfini played Ben Pinkwater, a seemingly mild-mannered insurance man who turns out to be a violent Russian mobster. He also appeared in The Juror as a mob enforcer with a conscience. In Get Shorty he appeared as a bearded ex-stuntman with a southern accent.

The Sopranos
Gandolfini's most acclaimed role is that of Tony Soprano, the Mafia boss and family man in the multi-award-winning HBO series The Sopranos, which debuted in 1999. To date, he has won three Emmys for "Best Actor in a Drama" for his depiction of New Jersey Mafia boss Tony Soprano, an aging baby boomer who constantly questions his own identity and purpose.

Gandolfini has been acclaimed for his portrayal of Tony Soprano and is probably best known for his work on the show. Gandolfini eventually garnered $1,000,000 per episode in the series. Entertainment Weekly recently listed him as the 42nd Greatest TV Icon of All Time for playing Tony Soprano.

Personal life
Gandolfini is typically identified as politically liberal yet independent. He is an ardent supporter of Rutgers' football team, and has appeared in several television commercials for the university's football program, usually alongside head coach Greg Schiano and most recently with another famous Rutgers alumnus, Mario Batali.

In contrast to his on-screen character Tony Soprano, Gandolfini is modest and obsessive. He has even described himself as "a 260-pound Woody Allen." He considers himself a pacifist and has maintained reservations about continuing his portrayal of the violent mob boss. His sister Johanna is a prominent official with the New Jersey Family Court system.

Gandolfini is a big fan of motorbikes, and owns a Harley Davidson and a Vespa Scooter.

He keeps ties with his hometown of Park Ridge by supporting The Octoberwoman Foundation for Breast Cancer Research for his friends Judy and Phillip DiBella. He appears at their annual October banquet and often brings other cast members of the Soprano's to help The Foundation draw a large crowd.

On May 4, 2006, Gandolfini crashed his Vespa scooter into a taxi. He was forced to undergo knee surgery after the accident, postponing the filming of the final Sopranos episodes.

He currently resides in New York City. He also bought a lot on the Lake Manitoba Narrows, presumably to build a cottage.