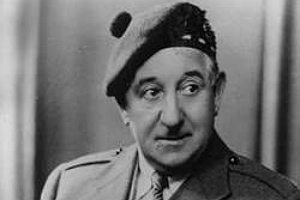 Fyffe made his debut in his father's stock company at the age of six. He travelled extensively throughout Scotland and the rest of the UK, playing the numerous music halls of the time, where he performed his sketches and sang his songs in his own inimitable style. During the '30s, he was one of the highest paid musical hall artistes in Britain.

In addition, Fyffe appeared in 23 major films of the era (American and British), sometimes starring, and recorded over 30 songs, witty masterpieces enveloped in an engaging melody and delivered with his own unique style.

His singer-songwriter skills are still well known to us today and whereas the memory of his contemporaries may continue to fade, Will has become immortalised for his rendition of his own composition, "I Belong To Glasgow". This song, which has been covered by the likes of Danny Kaye, Eartha Kitt, Gracie Fields and Kirk Douglas, is still as fresh today as it was then, and is as memorable for its lyrics as it is for its melody :

“If your money, you spend,

You’ve nothing to lend,

Isn’t that all the better for you”

As a result of this song, Will became forever associated with Glasgow, even though he was born 70 miles (110 km) away in the east coast city of Dundee.

Fortunately for us, Fyffe left some rare footage of his stage act, which gives us a glimpse of stage life in those times. In the footage, he performs the “Broomielaw” sketch and sings his song “Twelve and a Tanner a Bottle”. The footage came about as a result of a screen test, shot for Pathe in New York in 1929.

His father was interested in theatrical entertainment and operated a Penny Geggy, in which the young Will gained valuable experience as a character actor, as he travelled around the Lowlands of Scotland.

In his twenties, Fyffe joined Will Haggar Junior's Castle Theatre company, touring the South Wales Valleys from its base in Abergavenny. Fyffe and his wife feature in an advert for the Castle Theatre in the Portable Times in 1911.

Fyffe's screen debut was in 1914 when William Haggar, Will Junior's father and a pioneer silent film producer, made an epic 50-minute version of the classic Welsh Tale, The Maid of Cefn Ydfa, which was first screened in Aberdare in December of that year. Reviewed in The South Wales Echo in 1938, the film disappeared, but was rediscovered in 1984 in a family cupboard and conserved: 38 minutes survives, in the Welsh Film Archive in Aberystwyth. In the film, Fyffe plays Lewis Bach, the loyal servant of the maid.

As a character actor, he was much in demand in Hollywood and Britain, starring and co-starring in dozens of productions, with the likes of Finlay Currie, Patricia Roc, John Laurie, Duncan MacRae, John Gielgud, Douglas Fairbanks Jr, Margaret Lockwood and Charles Hawtrey. His last film was The Brothers, which was released shortly after his death. In Owd Bob, (To The Victor in America), Fyffe plays the ‘likeable old carmudgeon’, McAdam,. The New York Times describes Fyffe's performance as fitting “snugly into the mental dossier we have been compiling under the heading, great performances”.

Although he became well known as a talented actor for the breadth of his on-screen characterisations, Fyffe was also a successful music hall artist (singer-songwriter and comedian), creating a succession of comic characters, whose story he narrated with his unique form of delivery – Fyffe would start his song, pausing in the middle to give a monologue with further detail of the song’s storyline, before resuming the song where he left off. Listen to the stories of the 94 year-old bridegroom and his 3 scheming sons in "I’m 94 Today", and the proud new father in "You Can Come And See The Baby". 'Daft Sandy', the village idiot, was one of Fyffe’s most popular characters - the drama critic, James Agate, referred to this as "a masterpiece of tragi-comedy". Will Fyffe had the ability to create a character and then seem to actually be that character.

In 1937, Fyffe appeared in the Royal Command Performance at the London Palladium. As one local commentator put it:

“ … we are sure the lasting thrill for us all was the finale, Will Fyffe, a wonderful Scottish comedian, was top of the bill. To finish, he sang a song. On the second chorus, the scenery changed completely, and down the aisles came Scottish Pipers. The artists all appeared around a rostrum in front of the orchestra, and we filled the stage, in Scout uniform complete with red scarf. It was the greatest thrill of our young lives. As the National Anthem was played, we faced the Royal Box and sang as we had never sang before.”

For a period, Fyffe developed a successful stage partnership with Harry Gordon, playing opposite him in pantomime for many years.

In 1939 Fyffe was the ninth most popular British star at the box office.

I Belong To Glasgow

It was when Fyffe wrote and recorded the song "I Belong to Glasgow" that he became a world wide star. According to Albert Mackie's The Scotch Comedians (1973), Fyffe found the inspiration for the song from a drunk he met at Glasgow Central Station. The drunk was "genial and demonstrative" and "laying off about Karl Marx and John Barleycorn with equal enthusiasm". Fyffe asked him: "Do you belong to Glasgow?" and the man replied: "At the moment, at the moment, Glasgow belongs to me."

He was so popular that the Empire Theatre in Glasgow ran a 'Will Fyffe' competition, with dozens of entrants singing I belong to Glasgow. Heavily disguised as himself, Fyffe entered the competition for a bet, but he could only win second prize! According to theatre manager and historian, W. J. MacQueen-Pope: "Will Fyffe was a man of great honesty and integrity", and this comes across in his songs when heard today.

One of the lines in "I Belong to Glasgow" reads  : 'We went in a hotel, where we did very well'. It was by falling from a hotel room window that Fyffe met his death. (After an operation on his right ear in 1947, Will went to recuperate at his own hotel in St Andrews. One night, he fell from the window of his suite and was taken to the local cottage hospital, where he later died.)

Fyffe was survived by a son, Will Fyffe Jr. (1927–2008), a musical director who wrote a musical about his father’s life, and a daughter, Eileen.