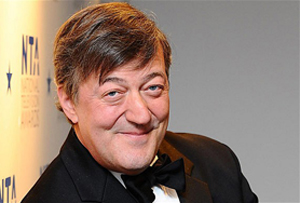 Stephen John Fry (born 24 August 1957) is an English comedian, writer, actor, novelist, filmmaker and television personality. The former comedic collaborator of Hugh Laurie, he is perhaps best known for his recurring role in the BBC TV series Blackadder. He is currently the host of the television panel game QI.

Childhood and education
Fry was born in Hampstead, London, the son of Alan Fry, an English physicist, and Marianne Newman, of Austrian-Jewish parentage. He has an older brother, Roger, and a younger sister, Joanna. Fry grew up in the village of Booton near Reepham, Norfolk, having moved from Chesham when very young.

Fry briefly attended Gresham's School, Holt, before going on to Stouts Hill Preparatory School, Uppingham School, Rutland, where he joined Fircroft house. He was expelled from Uppingham when he was fourteen, and subsequently from the Paston School. At seventeen, following his failure at Norfolk College of Arts and Technology, Fry absconded with a credit card stolen from a family friend, and as a result spent three months in Pucklechurch Prison on grounds of fraud. Following his release he resumed education at Norwich City College, promising administrators that he would study rigorously to sit the Cambridge Entrance Exams. He passed well enough to gain a scholarship to Queens' College, Cambridge.

At Cambridge, Fry gained a 2:1 in English literature, joined the Cambridge Footlights, and appeared on University Challenge. As a member of the Footlights he also met his future comedy collaborator, Hugh Laurie.

Career
Fry came to the attention of the public in the mid-1980s with appearances on Saturday Live alongside Hugh Laurie. Involvement in the programme led to his casting as Lord Melchett in Blackadder II, the 1986 series of the popular BBC sitcom co-written by Saturday Live host Ben Elton. His cameo as the Duke of Wellington in the following year's series, Blackadder the Third, led to the development of character General Melchett, with whom Fry would make a career-defining performance in the 1989 series Blackadder Goes Forth.

In 1987, while starring in Blackadder the Third, Fry made the first series of comedy sketch show A Bit of Fry and Laurie with his long-time comedy partner. Their elaborate and eclectic mix of word-play and innuendo was greatly successful, running for 26 episodes spanning four series. In 1988 Fry became a regular contestant on popular improvisational comedy programme Whose Line Is It Anyway?, as well as featuring in his own six-part BBC Radio 4 series, Saturday Night Fry.

Fry has often expressed great admiration for three authors in particular: Anthony Buckeridge, his friend Douglas Adams, and P.G. Wodehouse, all of whom have strongly influenced his writing. Appropriately, he has appeared in dramatic adaptations of all three men's works: as Jeeves (alongside Hugh Laurie's Bertie Wooster) in the Granada adaptations of Wodehouse's novels and short stories entitled Jeeves and Wooster ; as the voice of The Guide in the film adaptation of Adams' novel The Hitchhiker's Guide to the Galaxy; and as the narrator in a BBC radio reading of Buckeridge's Jennings stories. He has also been a fan of Oscar Wilde since he was 13, finding Wilde to be someone with whom he could "fiercely and proudly identify". Fry portrayed Wilde in the 1997 film Wilde, fulfilling to critical acclaim a role that he has said that he was "born to play".

Since the fourth and final series of A Bit of Fry and Laurie was broadcast in 1995, Fry has maintained a renowned comic reputation as an individual, particularly on comedy panel games such as Just a Minute, I'm Sorry I Haven't a Clue and Have I Got News for You (although he now refuses to appear on the latter in protest against the 2002 sacking of host Angus Deayton). QI, the panel game he hosts, has become one of the most-watched entertainment programmes on British television. In 2006 he won the Rose d'Or award for Best Game Show Host for his work on the series.

In recent years many of Fry's projects have differed from those of his early comedy and acting career. Since the publication of his first novel, The Liar, Fry has written three further novels, several non-fiction works and an autobiography, all of which have been much acclaimed by critics. His most recent book, The Ode Less Travelled: Unlocking The Poet Within, has closely associated Fry with poetry. In early 2006 he became the patron of Norfolk-based literature group Centre Poets, following the death of journalist John Timpson.

Fry's first foray as a film director was the 2003 release entitled Bright Young Things. In 2001 he had begun hosting the BAFTA Film Awards, a role from which he stepped down in 2006, noting that "it has been a tremendous six years, and I look forward to watching it without nerves in the future." Later that same year he wrote the English libretto and dialogue for Kenneth Branagh's film adaptation of The Magic Flute.

In television, Fry has most recently appeared in, and been executive producer for, a six-part legal drama entitled Kingdom. As well as this he has taken up a recurring guest role as a psychiatrist in the popular American drama Bones. Following the transmission of his two-part documentary on bipolar disorder, Stephen Fry: Secret Life of the Manic Depressive, and of his appearance on the genealogy series Who Do You Think You Are?, Fry has been involved in making further documentaries for the BBC. A programme on the subject of HIV and AIDS, Stephen Fry: HIV and Me, was aired as part of BBC Two's autumn 2007 programming schedule, and will be followed by a five-part series entitled Stephen Fry in America.

Besides the Harry Potter books Fry has recorded audio versions of works by Roald Dahl, Michael Bond, A. A. Milne and Douglas Adams, as well as several of his own books. He is also the narrator of award-winning animated programmes Pocoyo and The Transporters, the latter being part of an autism research initiative supported by the University of Cambridge.

In 2007, Fry interviewed Tony Blair (then Prime Minister of the United Kingdom) as part of a series of podcasts available from the 10 Downing Street website. They discussed British social and cultural changes since the general election of 1997, at which Blair's Labour Party was voted into government.

Personal life
Fry struggled to keep his homosexuality secret during his teenage years at public school, and was celibate for 16 years. When asked about when he knew he was homosexual he quotes an old friend and says, "I suppose it all began when I came out of the womb. I looked back up at my mother and thought to myself, 'That's the last time I'm going up one of those'". Fry currently lives in London with his partner, Daniel Cohen, whom he met in 1995. He also has a second home in West Bilney near King's Lynn, Norfolk.

Fry suffered a nervous breakdown in 1995, during a time in which he was appearing in Cell Mates, a West End play. Fry was also suffering from clinical depression and cyclothymia, a form of bipolar disorder. He subsequently walked out of the production, prompting its early closure and incurring the displeasure of co-star Rik Mayall and playwright Simon Gray. Fry went missing for several days while contemplating suicide. He abandoned the idea and left the United Kingdom by ferry, eventually resurfacing in Belgium.

Fry has spoken publicly about his experience with bipolar disorder and has presented his documentary about it, Stephen Fry: The Secret Life of the Manic-Depressive. In the documentary he interviewed sufferers of the illness including celebrities Carrie Fisher, Richard Dreyfuss, and Tony Slattery. Also interviewed were chef Rick Stein, whose father committed suicide, Robbie Williams, who talks of his experience with unipolar depression, and comedienne Jo Brand. The two-part series was broadcast on BBC Two in September 2006, repeated in March 2007 as part of the BBC's programming in aid of Comic Relief, and repeated in August 2007 as a celebration of Fry's 50th birthday.

Fry was an active supporter of the British Labour Party for many years, and appeared in a party political broadcast on its behalf with Hugh Laurie and Michelle Collins in November 1993. Despite this, he did not vote in the 2005 General Election because of the stance of both the Labour and Conservative parties with respect to the Iraq War. Despite his praising of the current government for social reform with regard to homosexuality, Fry has been critical of the Labour Party's "Third Way" concept. He is on cordial terms with Prince Charles (despite satirising him heavily as King Charles I in the comedy programme Blackadder: The Cavalier Years), through his work with the Prince's Trust. He attended the wedding of the Prince of Wales to Camilla Parker-Bowles in 2005.

A great fan of cricket (he is related to legendary England cricketer and jack of all trades C.B. Fry), he was recently interviewed for the Ashes Fever DVD, reporting on England's victory against Australia in the 2005 Ashes series. In football he is a supporter of Norwich City (as mentioned in Ashes Fever).

Acclaim
In a 2005 poll to find The Comedian's Comedian, Fry was voted amongst the top 50 comedy acts ever by fellow comedians and business insiders, and, in September 2006, number 9 in a poll of TV's Greatest Stars as voted for by the general public. In December 2006 he was ranked 6th for the BBC's Top Living Icon Award, was featured on The Culture Show, and was voted most intelligent man on television by readers of Radio Times. He was once described as a "man with a brain the size of Kent" in an interview with Michael Parkinson, but lost Martine McCutcheon and Louis Walsh £15,000 for charity when he supplied the incorrect answer as their "phone a friend" on Who Wants to Be a Millionaire?.

23rd on the previous year's list, the Independent on Sunday Pink List named Fry the second most influential gay person in Britain in May 2007. Later the same month he was announced as the 2007 BT Mind Champion of the Year in recognition of the awareness raised by his documentary on bipolar disorder, and was nominated for Best Entertainment Performance (QI) and Best Factual Series (Secret Life of the Manic Depressive) at the 2007 British Academy Television Awards.

BBC Four dedicated two nights of programming to Stephen Fry in summer 2007 to mark his 50th birthday. Fry turned 50 on 24 August 2007, and the channel cleared the schedule on 17–18 August to celebrate by broadcasting some of his best work and favourite shows. The first night started with a 60-minute documentary entitled Stephen Fry: 50 Not Out, featuring interviews with such colleagues as Hugh Laurie, Emma Thompson, Richard Curtis and Ben Elton. The second night was curated by Fry and included a 60-minute interview in which he talks to Mark Lawson about his life and career, later followed by a 30-minute programme entitled Stephen Fry: Guilty Pleasures.