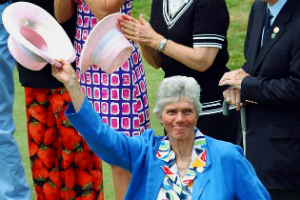 American tennis champ, the winner of all four of the Grand Slam titles during her career, one of only five players to win all the major titles in singles and doubles. An outstanding doubles player, Fry shared four U.S., four French, and three Wimbledon titles with Doris Hart, and added an Australian Championship with Althea Gibson.

Fry’s dad, Lester, owned a tennis shop and encouraged her athletic skills. "Dad was before his time," she said, "he thought women could do anything men could do. She first joined the circle of champions in 1956 by winning the women’s singles title at Wimbledon and the U.S. Nationals. She teamed with Doris Hart from 1951-1954 to win four doubles titles at the U.S. National Championships and three Wimbledon doubles titles. She won the French title in 1951 and the doubles titles, again with Doris from 1950-1953. In 1957, she won the Australian championship and teamed with Althea Gibson to win the doubles crown.

Fry retired and married in Australia, where she had the first of her four children. She lived in Connecticut for 35

years before moving to Florida in 1988. Doris Hart has remained her closest, lifelong friend.

The tennis world of the '50s was much different from today. The players were amateurs, earning little more than expense money. They stayed in people's homes on the road. When they ventured overseas, they stayed for three or four months at a time. They rarely went to Australia; Hart said her trip took 36 hours from Florida.

They played singles, doubles and mixed doubles at every tournament. Three of the four Grand Slams (all but the French) were played on grass and the rackets were made of wood -- two factors that made the game easier on their bodies. There weren't the arm and shoulder problems from whaling away with today's lighter, high-tech rackets that Fry calls ``trampolines. Without hard courts, there were fewer leg and knee problems. Fry, 72, didn't give up tennis until 1990, when she said her knees gave out. She now plays golf regularly. She was inducted into the International Tennis Hall of Fame in 1970.