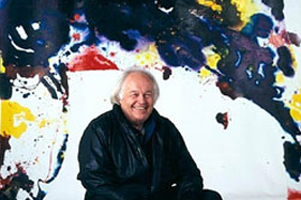 American Abstract Expressionist Painter and Muralist, with a career spanning half a century that brought him international acclaim. Called California's answer to Matisse, Francis' eclectic and prodigious output placed him front and center in the second generation of Abstract Expressionists.

Francis was raised by avant-garde parents who encouraged his artistic talent. He began his career in 1943 while hospitalized for spinal tuberculosis, which he contracted as a result of a plane crash. Francis never fully recovered and the illness left him with a delicate bill of health and in a state of almost constant pain. After earning a master's degree in art from Berkeley in 1949, he moved to Paris in 1950, where he had his first solo show the following year and was to maintain strong ties to Europe for the rest of his life. Moving to Santa Monica, California in 1961, he survived a second bout of TB and subsequently established himself as an artistic guru in the community. His creative drive was fueled by Far Eastern philosophy, most notably Buddhism, combined with Jungian archetypes and his own homespun superstition.

Critical and popular acclaim concurred that Francis's life and art were both marked by tremendous conflict and struggle. "In his journal entitled "Saturated Blue," published posthumously in 1996, he wrote "every artist lives and dies in an environment of lies. I am a natural liar for I am an artist and naturally so. The personal lives of painters are tragic and inevitable and do not explain the artist. For the artist is his work and no longer human." Francis often painted amorphous shapes contrasted with emptiness, also noting in his journal, "the role of the artist is to create the cosmos for man." Intrigued with Herman Melville's "Moby Dick" in the 50s, he created a series of paintings revolving around the idea of the whiteness of the whale, seeing himself as the pursuer of the great white canvas. It is said that he will be best remembered for his massive paintings combining explosions of color with vast expanses of blazing white.

In addition to his work on canvas, Francis also created an enormous amount of graphic work in The Litho Shop, a studio print shop he opened in 1970 in Venice, California. A cancer diagnosis in the 70s sent Francis on a pursuit of alternate medical and dietary regimens that allegedly cured him. Francis was convinced he contracted cancer from the highly toxic paint he often used while working, and, after arthritis struck, a second cancer diagnosis in 1987 brought the same nutritional regimen coupled with exercise. A broken arm in 1992 triggered a petrifying fear of death. Consulting an astrologer, he was told that from now on he was going to live a healthier life than he had ever had previously, a statement which made Francis see the light at the end of the tunnel. For the next two years he worked in his studio at a feverish pace, creating 150 small paintings in five months that he hung from floor to ceiling in one room that he named "The Last Works" and which was to be viewed as a single work.

"Sam was very prolific and he did things in a very big way." Calling himself "a spender," in his later years Francis accumulated a vast estate worth millions of dollars. In addition to his own work, he owned some 400 works of other artists, a house in Paris, a home and studio in Pt. Reyes, California property on Lake Washington in Washington state, a 450 acre ranch in California and interest in a building in Maui. He also owned eight Arabian horses, a herd of cattle, and assorted cars. He established a publishing company called Lapis Press for books on art, which published "Saturated Blue," and a foundation whose purpose was never clearly defined.

Francis finally succumbed to cancer in Santa Monica, California on November 4, 1994. Fifth wife Margaret Smith Francis was the sole recipient of the estate.

Hobbies aside from art found Francis fishing or on his beloved mountain bike. His first four marriages ended in divorce. Two of his wives were Japanese and he was the father of four children. A journal entry is "Saturated Blue" reads "Color is a series of harmonies, everywhere in the universe being divine, whole numbers lasting forever, adrift in time... And the last words will be those of the stars."