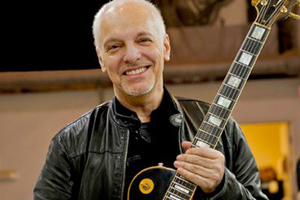 Peter Kenneth Frampton (born April 22, 1950 in Beckenham, Kent) is an English musician, best known today for his solo work in the mid-1970s and as one of the original members of the band Humble Pie.

Frampton first became interested in music when he was seven-years old. He discovered his grandmother's banjolele (a banjo-shaped ukulele) in the attic. Teaching himself to play, he became near obsessed, and upon receiving a guitar and piano, from his parents, taught himself those instruments as well.

By the age of ten, Frampton played in a band called the Little Ravens. Both he and David Bowie were pupils at Bromley Technical School where Frampton's father, Owen Frampton, was an art teacher and head of the Art department. The Little Ravens played on the same bill at school as Bowie's band, George and the Dragons. Peter and David would spend time together at lunch breaks, playing Buddy Holly songs.

In 1966, he became as a member of The Herd. He was the lead guitarist/singer, scoring a handful of British teenybopper hits. Frampton was named "The Face of 1968" by the UK press.

In 1969, when Frampton was 19 years old, he joined with Steve Marriott of The Small Faces to form Humble Pie.

While playing with Humble Pie, Frampton also did session recording with other artists including; Harry Nilsson, Jim Price, Jerry Lee Lewis and George Harrison's solo All Things Must Pass. This session was where he was introduced to the 'Talkbox' that has become such a trademark guitar sound for Frampton.

After five albums with Humble Pie, Frampton left and went solo in 1971, just in time to see 'Rockin' The Fillmore' rise up the US charts.

His debut was 1972's Wind of Change. This album was followed by Frampton's Camel in 1973, which featured Frampton working within a group project. In 1974, Frampton released Somethin's Happening. Frampton toured extensively to support his solo career. In 1975, the Frampton album was released. The album went to #32 in the US charts, and is certified Gold by the RIAA.

Peter Frampton had minimal commercial success with his early albums. This changed with Frampton's breakthrough best-selling live album, Frampton Comes Alive! (1976). "Baby, I Love Your Way" and "Show Me the Way" were singles. "Do You Feel Like We Do", despite its length, was also popular. The latter two tracks also featured his use of the talk box guitar effect. The album became the biggest selling live album at the time of it's release and sold over 6 million copies in the US, 16 million worldwide.

His following album, I'm in You (1977) contained the hit title single and went platinum, but fell well short of expectations compared to Frampton Comes Alive!. Frampton then took a co-starring role with The Bee Gees in director Robert Stigwood's poorly received Sgt. Pepper's Lonely Hearts Club Band. Frampton's career seemed to be falling as quickly as it had risen.

He was involved in a near fatal car accident in the Bahamas near the time of Sgt Pepper's' release. In 1979, Frampton returned to recording. Past band members included Stanley Sheldon (bass), Bob Mayo (keyboards/guitar/vocals), Chad Cromwell (drums), and John Siomos (drums/vocals). The album, Where I Should Be (1979) was the first album recorded after his car accident.

In 1980, his following album Rise Up was released to promote his tour in Brazil. The album eventually turned into Breaking All The Rules, released the next year in 1981. These albums were the first he recorded almost completely live - their sound is believed to be the better for it"

Most notably, he also united with old friend David Bowie, and both worked together to make albums, although they met with little commercial success.

In the late 1990s, he starred in an infomercial plugging the internationally successful eMedia Guitar Method, a piece of instructional software represented as an alternative to taking actual guitar lessons. He claimed in the infomercial that the software was the best way to learn guitar.

In 1996, Frampton released Frampton Comes Alive II which contained live versions of many of the songs from his 80s and 90s solo albums. Although there was a large amount of marketing for the album, it did not sell well.

After the September 11, 2001 attacks, Frampton decided to become a United States citizen. He now resides in Indian Hill, a suburb east of Cincinnati, Ohio.

In 2003, he released the album Now, and embarked on a tour with Styx to support it. He also toured with The Elms. He appeared in 2006 on the FOX Broadcasting variety show Celebrity Duets, paired with Chris Jericho of WWE fame. They were the first pair voted out.

On February 11, 2007, "Fingerprints" was awarded the 2007 Grammy for Best Pop Instrumental Album. In February 2007, he also appeared on the Chicago based PBS television show Soundstage.

Personal life
Frampton has been married three times. His wives have been: Mary Lovett (1971–1973), Barbara Gold (1983–1993) with whom he had two children, and Tina Elfers (January 13, 1996 – present) with whom he has one child, named Mia Frampton. He also has another daughter, named Jade Frampton.

Frampton has appeared in television shows such as The Simpsons, Family Guy, and the Colbert Report, all with particular mentions of his "talking guitar" effect he uses in live shows. He also played an Australian coast watcher named Peter Buckley in the television program Baa Baa Black Sheep.
In Family Guy, in the episode Death Lives Peter claims that everyone must have the album, "Frampton Comes Alive!", due to its success. The album also includes his and Lois' song, Baby I Love Your Way.
In The Simpsons, Peter Frampton is featured in the episode Homerpalooza.
In 2000, Frampton served as a technical advisor for Cameron Crowe's autobiographical film Almost Famous. He also appears briefly in the film as 'Reg', a road manager for Humble Pie, Frampton's real-life former band.
In the television series Arrested Development Gob records a music CD with his puppet Franklin called "Franklin Comes Alive," a spoof of "Frampton Comes Alive".
Frank Zappa parodied "I'm in You" on his album Sheik Yerbouti with a song titled "I Have Been In You".
In the movie Wayne's World, Wayne (Mike Myers) is asked if he's heard Frampton Comes Alive!. He states "Everybody in the world has 'Frampton Comes Alive'. If you lived in the suburbs you were issued it free along with samples of Tide."
Mitch Hedberg once talked about smoking fake pot with Frampton in Almost Famous on his second CD Mitch All Together saying "But I got to smoke fake pot with Peter Frampton. That's a cool story. It's as cool as smoking real pot with a guy who looks like Peter Frampton. I've done that way more."
In the Buffy the Vampire Slayer episode "Dead Things", while the trio are hiding out in Andrew's cellar Jonathon finds Andrew's copy of Frampton Comes Alive.
An episode of That '70s Show opens with the main characters sitting listening to "Do You Feel Like We Do", and Jackie asks to "listen to the guitar solo just one more time".
In the 1994 film Reality Bites, Ben Stiller's character Michael states that the Frampton Comes Alive! album "like, totally changed my life".
In the 2000 film High Fidelity, John Cusack's character Rob says "Is that Peter fucking Frampton?!" when listening to Lisa Bonet's character Marie DeSalle performing a version of Frampton's "Baby I Love Your Way". Moments before this, a Peter Frampton lookalike is seen walking from right to left past John Cusack, before he asks about the song. In the book of the same name, the same character when referring to the song talks about how he and his ex-girlfriend would complain excessively about the awfulness and popularity of the song.
In the film version of Hedwig and the Angry Inch, Tommy Speck has his Frampton Comes Alive album forcibly taken from him by Hedwig.
Billabong created a bikini with Peter Frampton's likeness and the phrase "Baby I love your waves" (similar to "Baby I Love Your Way") on the back without permission, subsequently litigation was enacted.
On December 20, 2006, Frampton played in Stephen Colbert's place on Comedy Central's The Colbert Report after Colbert "injured" his hands during a guitar solo competition (the "Countdown to Guitar-mageddon") against indie pop group The Decemberists lead guitarist Chris Funk, which Frampton/Colbert won. The episode also featured Apples in Stereo lead singer Robert Schneider, music critic Anthony DeCurtis, New York University (NYU) professor Jim Anderson, New York governor-elect Eliot Spitzer, Cheap Trick guitarist Rick Nielsen, Henry Kissinger and Morley Safer. On the 26th February, 2007, episode of The Colbert Report, Stephen referred to Peter Frampton as "Sir Peter Frampton."
On June 22, 2007, Frampton was mentioned in the webcomic Achewood.