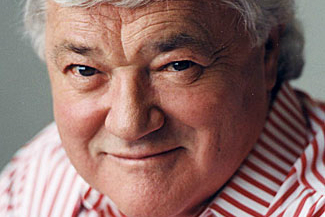 Allan Fotheringham (born August 31, 1932) is a Canadian newspaper and magazine journalist. He is widely known by the nickname Dr. Foth and styles himself as, "Always controversial... never at a loss for words" and also as "the Great Gatheringfroth".

Fotheringham was born in Hearne, Saskatchewan. He attended Chilliwack Secondary School, where he was active in student leadership. Upon graduation he studied English and Political Science at the University of British Columbia and worked at a variety of media outlets during his career. He was best known as a columnist, originally at the The Ubyssey, a still-operating student newspaper noted for its "biting" reporters and editors. He was hired straight out of university by the Vancouver Sun during the heady times of the late '60s, the final days of the old Bennett Socreds provincially and the advent of Pierre Trudeau federally. Fotheringham's columns and commentaries brought him national attention as well as wider syndication and a broader subject base. He was one of the leading specialists in explaining the twisted world of British Columbia politics during his time at the Sun.

He later wrote for Maclean's, where his column appeared on the back page of the magazine for 27 years. Fotheringham's column was so widely read and so influential that he is said to have made Maclean's "the magazine people read from back to front". Some of his more memorable political nicknames include "the brogue that walks and talks like a man" (for Jack Webster) and its offspring, "the jaw that walks and talks like a man" (for Brian Mulroney). He is credited with coining the terms Natural Governing Party for the federal Liberals, and the Holy Mother Corporation for the CBC in the course of writing his column. His columns occasionally opened with the exclamation "Zowie, Dr. Foth!"

In 2001, Maclean's underwent an editorial revamp, and Fotheringham's column was moved to an inside page to make room for a guest column. Soon afterward, Fotheringham left Maclean's, and became a columnist for The Globe and Mail. He had a national syndicated column that is in 20 newspapers but retired from regular contributions in 2007 due to illness. He still writes for the Globe and also for the National Post and a Calgary magazine called The Roughneck. He has also written material for Fifty Plus magazine, Readers Digest and Nuvo magazines.

For 10 years, Fotheringham was a regular panelist in the latter years of the CBC Television program Front Page Challenge, replacing the deceased Gordon Sinclair.