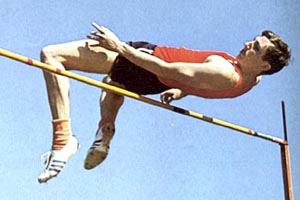 Richard Douglas "Dick" Fosbury (born March 6, 1947) is one of the most influential athletes in the history of track and field. He revolutionized the high jump event, inventing a unique "back-first" technique, now known as the Fosbury Flop, adopted by almost all high jumpers today. His method was to sprint diagonally towards the bar, then curve and leap backwards over the bar. He continues to be involved in athletics as President of the World Olympians Association .

High school and the origins of the Fosbury Flop

A high jumper performing the straddle technique, the first high jumping technique that Fosbury was taught

Fosbury, who was born in Portland, Oregon, first started experimenting with a new high jumping technique at age 16, while attending high school in Medford, Oregon.

Fosbury had difficulty competing using the dominant high jumping techniques of the period. In his sophomore year, he failed to complete jumps of 5 feet, the qualifying height for many high school track meets. This dominant technique, the straddle method, was a complex motion where an athlete went over the high jump bar facing down, and lifted his legs individually over the bar. Fosbury found it difficult to coordinate all the motions involved in the straddle method, and began to experiment with other ways of doing the high jump.

At first, he tried to use an outdated technique known as the upright scissors method. In this method, a jumper runs upright towards the bar, facing forward, and during his jump lifts his straight legs one at a time over the bar. High jump rules stipulate only that competitors may only jump off one foot at takeoff: there is no rule governing how a competitor crosses the bar, so long as he or she goes over it.

As he began to experiment with this technique, he gradually adapted it to make himself more comfortable and to get more height out of it. Nonetheless, it was nowhere near as coordinated as a well-performed straddle method jump, and one historian has referred to Fosbury's early attempts as an 'airborne seizure', but during the latter part of his sophomore year and the beginning of his junior year, it began to produce results, and he gradually was able to clear higher jumps.

Gradually, Fosbury shifted his positioning during the jump, such that by his senior year he had begun to go over the bar backwards, head-first, curving his body over the bar and kicking his legs up in the air at the end of the jump. This required him to land on his back, but prior to his junior year, his high school had replaced its wood chip landing pit with a softer material, so he was able to land safely.

Luckily for Fosbury, replacement of landing surfaces with foam rubber was becoming common across the United States in the early 1960s. Sawdust, sand, or wood chip surfaces had been usable previously because jumpers using the scissors technique were able to clear the bar while upright and then land on their feet, while those using the Western Roll or Straddle made a three-point landing on their hands and lead leg.

In the late 1950s, American colleges began to use bundles of soft foam rubber, usually held together by a mesh net. These bundles were not only much softer, but were also elevated about 3 ft (0.91 m) off the ground. By the early 1960s, American high schools were following the lead of the colleges in acquiring foam rubber landing pits. With the new, softer, elevated landing surface, Fosbury was able to land safely.

Fosbury's coaches at first encouraged him to continue practicing the straddle method, but abandoned that when his marks continued to improve. In his junior year, he broke his high school record with a 6 ft 3 in (1.91 m) jump, and the next year took second place in the state with a 6 ft 5.5 in (1.969 m) jump. Other high school jumpers in the United States and Canada had experimented with similar techniques, but Fosbury was the first to gain widespread media attention. A 1964 photograph of him performing his technique was widely distributed, and was reprinted in newspapers around the world. Many of them made fun of the new technique, with one newspaper captioning the photograph, "World's Laziest High Jumper." The technique gained the name the "Fosbury Flop" after a reporter for a Medford newspaper wrote that he looked like a, "fish flopping in a boat."

After graduating from Medford High School in 1965, he enrolled at Oregon State University in Corvallis. Fosbury won the 1968 NCAA title using his new technique, as well as the United States Olympic Trials.

Fosbury continued to refine his technique, developing a curved, J-shaped approach run. This allowed him to increase his speed, while the final "curved" steps served to rotate his hips. As his speed increased, so did his elevation. Fosbury made little-to-no use of his arms at takeoff, failing to "pump" them upwards, keeping them down, close to his body: the next generation of floppers would add an arm pump. Fosbury's key discovery was the need to adjust his point-of-takeoff as the bar was raised. His flight through the air described a parabola: as the bar went up in height, he needed more "flight time" so that the top of his arc was achieved as his hips passed over the bar. To increase "flight time", Fosbury moved his takeoff farther and farther away from the bar (and the pit). Jumpers have a natural tendency to be drawn in closer to the bar and it requires mental discipline to move out, rather than in. By way of comparison, classic Straddle jumpers plant their take-off foot in the same place every time, less than one foot away from a line parallel with the bar. Photographs of Fosbury attempting heights above 7 feet show him taking off nearly four feet (over one meter) out from the bar.

In the 1968 outdoor season, Fosbury won the PAC-8 Conference title and went on to win the NCAA championship at Knoxville, Tennessee in mid-June with a jump of 7' 2 1/2. He duplicated those wins the following year (1969).

Fosbury at the 1968 Summer Olympics

Fresh off his NCAA win in mid-June, Fosbury went on to win the US Olympic Trials two weeks later in Los Angeles with a jump of 7' 1" (2.16). However, despite the win his place on the Olympic team was not assured because the US Olympic Committee was worried that the results at sea-level Los Angeles might not be replicated at the high altitude in Mexico City. Another competition was held in September at the Olympic camp at South Lake Tahoe, California. At that competition, Fosbury was one of four men to clear 7'2", but he was in fourth place because of misses. The bar was raised to 7'3", a height none of the 4 had ever cleared. However, Olympic veteran Ed Caruthers, high schooler Reynaldo Brown and Fosbury all cleared on their first attempts. When the fourth man, John Hartfield, another high schooler who had been leading the competition, missed all 3 of his attempts, the Olympic team of three jumpers was set.

At the 1968 Olympics in Mexico City, Fosbury took the gold medal and set a new Olympic record at 2.24 meters (7 feet 4.25 inches), displaying the potential of the new technique. Despite the initial skeptical reactions from the high jumping community, the "Fosbury Flop" quickly gained acceptance. In the Finals competition, only three jumpers cleared 2.20 meters (7 feet 2.5 inches), and Fosbury was in the lead by virtue of having cleared every height on his first attempt. At the next height, 2.22 m (7 feet 3.25 inches), Fosbury again cleared the bar on his first jump. His teammate, Ed Caruthers, cleared on his second effort, while Valentin Gavrilov of the Soviet Union missed on all three attempts and earned the bronze medal (third place). The bar was raised to 2.24 meters, which would be new Olympic and United States records. Fosbury missed on his first two attempts, but cleared on his third, while Caruthers missed on all three of his attempts. Having won the gold medal and broken the American record, Fosbury asked the bar to be raised to 2.29, hoping to break Valeriy Brumel's 5-year old World Record of 2.28. However, none of his attempts at 2.29 came close to clearing.

Athletic legacy and the dominance of the flop

Four years later, in Munich, 28 of the 40 competitors used Fosbury's technique. By 1980, thirteen of the sixteen Olympic finalists used it. Of the 36 Olympic medalists in the event from 1972 through 2000, 34 used "the Flop".  Today it is the most popular technique in modern high jumping.

Fosbury graduated from OSU in 1972 with a degree in civil engineering and is the co-owner of Galena Engineering, Inc. in Ketchum, Idaho, where he has lived since 1977.

In March 2008, Fosbury was diagnosed with stage one lymphoma. He had surgery a month later to remove a cancerous tumor engulfing his lower vertebra. Due to concerns about tumor's proximity to the spine, it was not completely removed and he was put on a chemotherapy regimen. In March 2009, Fosbury announced that he was in remission.

Dick Fosbury is today a member of the ‘Champions for Peace’ club, a group of 54 famous elite athletes committed to serving peace in the world through sport, created by Peace and Sport, a Monaco-based international organization.