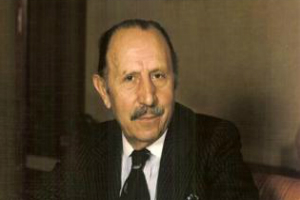 Sir Charles Forte was born as Carmine Forte in Mortale, now Monforte, Casalattico, in the province of Frosinone, Italy in 1908.

He emigrated from Italy to Scotland at the age of four.

He attended Alloa Academy and then St. Joseph's College, Dumfries as a boarder followed by two years in Rome.

After Rome Forte rejoined his family, who had moved to Weston-super-Mare, where his father ran a café with two cousins. Charles's main training at the age of 21 came in Brighton, where he managed the Venetian Lounge for a cousin.

At 26, he set up his first "milk bar" in 1935, the Strand Milk Bar Ltd, in Regent Street, London, having thoroughly researched the location. Soon he began expanding into catering and hotel businesses. At the outbreak of World War II, Forte was interned in the Isle of Man due to his Italian nationality, but he was released after only three months.  After the war, his company became Forte Holdings Ltd, and bought the Café Royal in 1954. In the 1950s he also opened the first catering facility at Heathrow Airport and the first full British motorway service station for cars at Newport Pagnell, Buckinghamshire on the M1 motorway in 1959.

Forte was knighted by the Queen in 1970 and awarded a life peerage in 1982 as Baron Forte, of Ripley in the County of Surrey. He was also a knight of the Sovereign Military Order of Malta.

Trust Houses Group Ltd and Forte Holdings were merged in 1970 to become Trust House Forte or THF. Through mergers and expansion, Forte expanded the Forte Group into a multi-billion pound business. His empire included the Little Chef and Happy Eater roadside restaurants, Crest, Forte Grand, Travelodge and Posthouse hotels, as well as the wine merchant Grierson-Blumenthal and a majority (although non-controlling) stake in the Savoy Hotel.

The Grierson-Blumenthal stake was a "forced" acquisition by the group; it had originally been a personal holding of Charles Forte and fellow directors of the group, supplying liquor to Forte restaurants and hotels at substantial personal profit until concern in the late 1970s about prosecution under the Companies Act obliged the directors to incorporate Grierson-Blumenthal as a subsidiary.

Forte was the CEO from 1971 and Chairman from 1982 (when his son Sir Rocco Forte took over as CEO) of the Forte Group. Happy Eater and the five Welcome Break service areas were bought from Hanson Trust PLC on 1 August 1986. In the 1990s, the company was renamed as Forte Group plc.

Lord Forte passed full control to Rocco in 1993, but soon the Forte Group was faced with a hostile takeover bid from Granada. Ultimately, Granada succeeded with a £3.9 billion tender offer in January 1996, which left the family with about £350 million in cash.

His granddaughter is Alex Polizzi, an hotelier and the presenter of Channel 5's The Hotel Inspector.

From the 1950s Forte lived with an extended family including his parents and children at Greenway Gardens in Frognal, north London. They worshipped at the Roman Catholic St. Mary's Church in nearby Holly Lane, Hampstead.