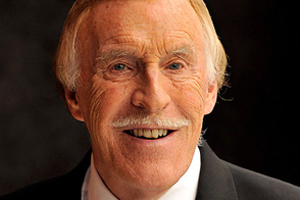 Sir Bruce Joseph Forsyth-Johnson CBE (born 22 February 1928), is an English television presenter and entertainer whose career spans 74 years. He rose to fame through the 1950s series Sunday Night at the London Palladium, going on to present series such as The Generation Game, Play Your Cards Right, The Price Is Right and You Bet!. He has been co-presenter of Strictly Come Dancing since 2004. Forsyth is known for his catchphrase, "Nice to see you, to see you nice".

Forsyth was born in Edmonton, London, the son of Florence Ada (née Pocknell) and John Thomas Forsyth-Johnson. His family owned a car repair garage in Victoria Road, Edmonton, and as members of the Salvation Army his parents played brass instruments and his mother was a singer. His great grandfather Joseph Forsyth Johnson (1840–1906) was a landscape architect who worked in Russia, Ireland and the United States. His great-great-great-great grandfather William Forsyth (1737–1804) was a founder of the Royal Horticultural Society and the namesake of the plant genus Forsythia.

Forsyth attended The Latymer School. After watching Fred Astaire in films at age eight, he trained in dance in Tottenham and then Brixton. He started in show business aged 14, with a song, dance, and accordion act called "Boy Bruce, the Mighty Atom." His first appearance was at the Theatre Royal, Bilston, with The Great Marzo at the top of the bill. Forsyth made his television debut in 1939 as a child, singing and dancing on a talent show introduced by Jasmine Bligh, probably an episode of Come and Be Televised (BBC, 1939), broadcast from Radiolympia.

Forsyth continued to perform through the Second World War, even after the death of his Royal Air Force pilot brother John in 1943 over Turnberry, Scotland. After the war, with the goal of joining Moss Empires theatres, he spent years on stage with little success and travelled the UK working seven days a week, doing summer seasons, pantomimes and circuses, where he became renowned for his strong-man act.

In 1958 an appearance with the comedian Dickie Henderson led to his being offered the job of compère of Val Parnell's weekly TV variety show, Sunday Night at the London Palladium. He hosted the show for two years, followed by a year's break, then returned for another year. His schedule of stage performances, which continued throughout the 1960s, forced him to give up the job of host.

In 1968, he played alongside Julie Andrews in the musical movie Star!, a biopic of stage actress Gertrude Lawrence. In 1976, he appeared on The Muppet Show where he took on the famous duo of Statler & Waldorf.

During his spell of hosting Sunday Night at the London Palladium as part of the show he hosted the 15 minute game show "Beat The Clock". Forsyth's next success was Bruce Forsyth and the Generation Game (BBC1, 1971–1977, 1990–1994) which proved popular and attracted huge Saturday evening audiences. It was on this show that Forsyth introduced his "The Thinker" pose, emulating Rodin's sculpture, appearing in silhouette each week after the opening titles. This pose is reminiscent of the circus strong-man attitude. He also wrote and sang the theme for the show "Life Is The Name of the Game."

He left the BBC in 1978 to present Bruce Forsyth's Big Night, which was also transmitted on Saturday evening, but on rival broadcaster ITV. However, the show was not a success and lasted just the one series. He was replaced on The Generation Game by Larry Grayson. Forsyth remained with ITV, hosting the game show Play Your Cards Right, which was the UK version of the US original Card Sharks (1980–87, 1994–99 and a brief period in 2002 before the show was cancelled due to low ratings). In 1986, he went to the United States to host a game show on ABC, Bruce Forsyth's Hot Streak, which ran for 65 episodes from January to April that year. Forsyth starred in the Thames Television sitcom Slinger's Day in 1986 and 1987, taking over a role played by Leonard Rossiter. His television appearances since the 1960s have included variety, comedy and light entertainment shows.

He was the original host of You Bet! (1988 to 1990) before the show reached mainstream success under the stewardship of Matthew Kelly. Forsyth fronted the third version of The Price Is Right (1995 to 2001). Forsyth's unsuccessful gameshows include Takeover Bid (1990 to 1991), Hollywood Or Bust (1984), Bruce's Guest Night (1992 to 1993) and Didn't They Do Well (2004). During the 1970s Bruce featured in the "Stork Margarine" adverts on television and then during the 1980s and 1990s he appeared in advertising for the furniture retailer Courts, in which he dressed as a judge.

In 2003, and again in 2010, Forsyth was a guest presenter on the news and satire quiz show, Have I Got News For You. During the first of these appearances, he presented a parody of his Play Your Cards Right format entitled Play Your Iraqi Cards Right. He has been co-presenter of Strictly Come Dancing since 2004. On 20 March 2010, Forsyth's interview on the autobiography-interview programme Piers Morgan's Life Stories was aired on ITV.

On 7 April 2010, Forsyth become one of the first three celebrities to be subjected to the British version of the American institution of a comedy roast, on Channel 4's A Comedy Roast. Forsyth was the subject of the BBC genealogy series Who Do You Think You Are?, broadcast on 19 July 2010.

On 27 February 2005, the BBC screened A BAFTA Tribute to Bruce Forsyth, to mark the entertainer's 60 years in show business. Forsyth had a bronze bust of himself unveiled at the London Palladium in May 2005. The sculpture was created by his son-in-law, and is on display in the theatre's Cinderella Bar.

In 1987, a fan club was created - The Great Bruce Forsyth Social Club. They would later go on to assist Forsyth in singing his opening number "It's Never Too Late" at his Audience With show. Bruce repaid this favour by adding the society to his busy schedule in June 1997, and appeared at their 10th AGM in Plymouth, and also mentioned them in his autobiography.

In December 2007, his catchphrase 'Nice to see you, to see you, nice' was voted the most popular UK catchphrase by the British public. On 24 February 2008, the BBC featured an 85-minute programme celebrating the star's 80th birthday, entitled "Happy Birthday Brucie!"

In 2008, he was made a Fellow of BAFTA. In 2009, he was awarded the Theatre Performers Award at the annual Carl Alan Awards. Hosted by the International Dance Teachers' Association, the awards are voted for by the leading dance organisations in the United Kingdom and recognise those who have made an exceptional contribution to the world of dance and theatre.

He was made a Knight Bachelor in the 2011 Birthday Honours for services to entertainment and charity. This followed a years-long public campaign to award Forsyth a knighthood. His investiture, by the Queen, took place on 12 October 2011 and he became Sir Bruce Forsyth-Johnson CBE.

In July 2012, he was given the honour of carrying the Olympic flame through London, as it finally reached the city on the penultimate day of the London 2012 Torch Relay.

Forsyth earned a place in the 2013 Guinness Book of World Records as the male TV entertainer having had the longest career, calling it a "wonderful surprise".

The popular virtual pet website Neopets has a Neopet species based on Forsyth, called a Bruce. Originally it started as a photo of him, and was called the Bruce-Forsyth, but due to legal issues it was eventually replaced by a creature resembling a penguin, called simply Bruce.

In series one, episode seven of The Vicar of Dibley, "The Easter Bunny," Geraldine says no one lives forever and is told "except Bruce Forsyth."

From 1953 to 1973, Forsyth was married to Penny Calvert, with whom he had three daughters: Debbie, Julie and Laura. According to his autobiography, he dated Miss World 1964 Ann Sidney during her reign and in a 2009 interview, Kathy Kirby claimed to have been Forsyth's lover and that he proposed marriage. From 1973 to 1979, he was married to Anthea Redfern, who had been the hostess on The Generation Game with whom he had two daughters: Charlotte and Louisa. Asked to judge the 1980 Miss World competition, he fell in love with fellow judge, the 1975 Miss World, Wilnelia Merced; they married in 1983, and have one son together, Jonathan Joseph Mark Forsyth Johnson (born 1987). By his six children, he has eight grandchildren and three great-grandchildren.

Due to his love of golf, his main residence is at the Wentworth Estate adjacent to the Wentworth golf course near Virginia Water in northwest Surrey. A childhood supporter of Arsenal, when the team's stadium was taken for air-defence searchlights during the Second World War, matches were played at Tottenham Hotspur's White Hart Lane ground, so he became a supporter of both clubs. His daughter Julie was a member of the Pop Group Guys 'n' Dolls. She later formed the duo "Grant & Forsyth" with her husband Dominic Grant who had also been a member of Guys 'n' Dolls.

Forsyth has his own company, Bruce Forsyth Enterprises Ltd, based in Surrey, to run his day to day monetary affairs.

Forsyth is an avid supporter and ambassador for the children's charity, Caudwell Children, regularly appearing at many of their high profile fund raising events.